Poland doesn’t deserve to be at the G20 yet

11.09.2014
Economic and demographic indicators will prevent our politicians from fulfilling their dreams of Poland participating in the G-20. However, we could fight for the status of a permanent guest and represent the societies which have freed themselves from communism and achieved a great success building market institutions that are less bureaucratised than in the rich Western countries.

The composition and prestige of the G-20, which has existed since 1999, are changing. Initially, the important matters for the world economy were discussed in the framework of the G-20 by the finance ministers and central bank governors of 19 states, a delegate of the European Union represented by the rotational presidency and a representative of the European Central Bank, as well as the managing director of the International Monetary Fund and the president of the World Bank. Since the meeting in Washington on 14 and 15 November 2008, it is the heads of state that meet at the G-20. Up to now there have been eight such summits: in London, Pittsburgh, Toronto, Seoul, Cannes, Los Cabos in Mexico and Petersburg. This year’s summit in November will take place in the Australian city of Brisbane.

Australia is taking a firm stance against Russian aggression in Ukraine, particularly after separatists shot down the Malaysian plane flying from Amsterdam to Kuala Lumpur in July. The plane was hit by weapons supplied by Russia. Among the 298 victims, 38 had Australian passports. According to news agencies, the Australian prime minister, Tony Abbott, is urging some leaders of G-20 countries to punish Russia for its acts of aggression by refusing to invite Russia’s representative to the summit this year.

Not only for the largest

Guests are also invited to the meetings. Spain is a permanent guest, so in fact, we could speak about a G-21. Apart from Spain, the countries that are managing the ASEAN group are invited, as are those managing the African Union and representatives of the New Partnership for Africa’s Development (NEPAD). Additional countries invited by the host represent regions which for some reason are considered to be important. Guests at G-20 summits have included the following countries: Benin, Brunei, Cambodia, Chile, Columbia, Equatorial Guinea, Ethiopia, Kazakhstan, Malawi, the Netherlands, Spain, Switzerland, Thailand, the United Arab Emirates and Vietnam. This year Australia has invited Mauritania, which chairs the African Union, Burma (Myanmar), which chairs the ASEAN countries, New Zealand, Senegal, which is the representative of NEPAD, Singapore and Spain.

In 2015 the G-20 summit will take place in Istanbul. A Pole will certainly take part – Donald Tusk will be representing the European Union. Polish politicians would like our country to become a permanent participator of the G-20 summits. However, we do not fulfil the basic criteria: we are somewhere between the top twenty and top thirty countries in terms of size of the economy. Exactly what Poland’s position is depends on the measurement criteria adopted.

How to compare economies?

The most popular benchmark of the potential of the economy is gross domestic product, in other words the sum of the income from work, income from capital, state income and depreciation. The advantages and disadvantages of this benchmark are widely known. If we apply GDP in international comparisons, we have the additional problem of determining in which currency and in which prices we express the amounts. Countries vary regarding the rate of inflation, while changes in the exchange rates do not correspond with inflation. Since the currencies are convertible in the majority of countries, one can calculate GDP in one currency (the US dollar still dominates here). However, such a measure does not reflect the real purchasing power of the earned income. In addition, it changes together with the fluctuations of the exchange rate of the local currency in relation to the dollar, which do not necessarily have to be the result of changes in purchasing power.

The World Bank, whose figures I shall use, applies the Atlas conversion factor in the case of international comparisons, which reduces the influence of exchange rate fluctuations. This conversion factor is calculated as an average exchange rate of the given country in the given year and the two previous years, adjusted by the difference between the inflation rate in that country and the inflation rate in the euro area, Japan, United Kingdom and the United States. The inflation of the country in question is measured as the change in the GDP deflator.

The World Bank presents both the GDP and the alternative measure, Gross National Income (GNI), in other words, the sum of gross domestic product and net primary income from abroad.

In order to calculate the rate corresponding to the purchasing power, research of representative-commodity prices is necessary in individual countries, but these are subject to various errors. Usually, in the poorer countries PPP deviates upwards from the exchange rate of the local currency against the dollar, while in the richer countries it deviates downwards.

The second measurement which indicates the potential of the economy is the size of the export of goods and services. Poland’s exports are growing rapidly, but its share in GDP is still below the European Union average and also below that of the majority of East Asian countries. As a result, in terms of the export of goods and services, Poland occupies almost the same position as in terms of GDP according to the current exchange rate.

The dynamics of change

In the ranking of the largest economies in terms of gross national income taking into account purchasing power, Poland advanced from 28th position in 1991 (no earlier data) to 23rd position in 2011 (the European Union was included as a separate country). Between 2012 and 2013 we fell to 25th place. It is worth mentioning that in 1991 the Ukrainian economy was in 20th position. Today it occupies 40th position, which shows the scale of the economic catastrophe in that country.

It is unlikely that Poland could climb up the ranking in the next few years. Our economy  maintains a decent rate of growth compared to the economies of other European countries, but other countries are developing much faster than us, notably the poorer countries, the more populous Asian countries, as well as some African and South American countries. 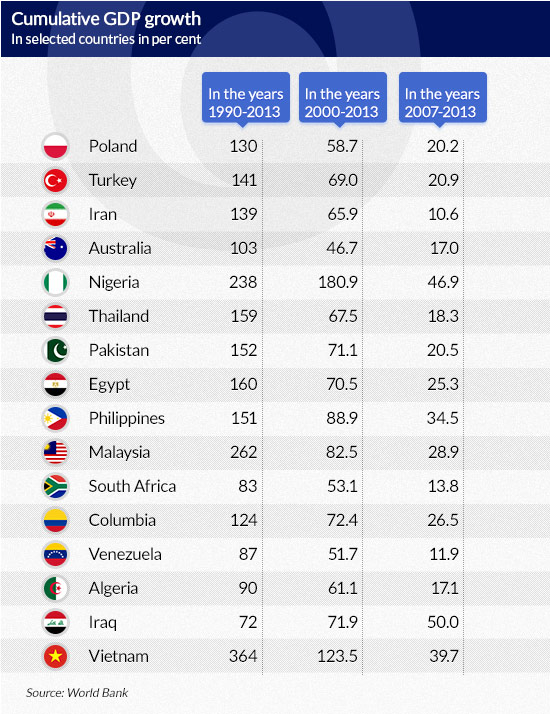 Egypt, which overtakes us in the GNI ranking calculated according to purchasing power parity, had a cumulative growth of 160 per cent between 1991-2013, while Poland had 130 per cent. Despite the world economic crisis, Nigeria’s economy grew by almost 50 per cent between 2007–2013, the Philippines’ by over 1/3, and Vietnam’s by almost 40 per cent. Poland will most likely fall further down the ranking in a few years, overtaken by the economies of the Philippines, Malaysia and Columbia.

Poland – with a national income of USD 22.3 thousand per capita (according to PPP) – is classified by the World Bank as belonging to the group of high-income countries. However, our population potential is modest in comparison with many countries which have a significantly lower income per capita than Poland. The low birth rate will influence the low labour supply in the long-term, which will slow down economic growth.

Between 2000–2013 the Polish population grew by a mere 0.7 per cent. It probably actually declined, since the emigration statistics were not taken into account. Among the 50 most populous countries in the world, only Ukraine, Russia, Germany and probably Poland experienced negative population growth this century. During this time the population of Nigeria grew by almost 40 per cent, the Philippines and Pakistan by over 25 per cent, Egypt by 24 per cent, and Vietnam by over 15 per cent. It is unlikely that this demographic trend will change in the next few decades. In the middle of the century we will be a country of 30 million people; we will be relatively wealthy, but in terms of economic potential we will occupy a place nearer to the bottom of the top 30 rather than the top.

We do not fulfil the criteria, but…

Poland, with its potential, is not included among the 20 largest economies of the world. Due to the lack of population growth and the weakening pace of economic growth, we are being caught by some of the developing countries. At the same time, the gap between Poland and the large economies of Western Europe, beset by stagnation, is too great for us to catch up in the nearest decade. A presence at the G-20 summits, although prestigious, is not essential for Poland to realise its interests, especially since the representative of the European Union will appear there on our behalf.

A realistic goal could be to obtain the status of a permanent guest at the G-20 summits, as Spain, the 16th economy in the world, currently enjoys. Poland’s potential is much smaller; however, the more rapid (although weakening) growth speaks in our favour. Moreover, apart from Russia there are no countries in the G-20 that experienced a transformation from a state economy to a market economy (the case of China is unusual here). We would be representatives of the societies that freed themselves from communism and achieved a huge success, building market institutions that are less bureaucratised than in the rich Western countries. We can invoke the case of South Africa, which obtained a permanent place at the G-20 as a reward for the democratic transformation and relatively stable political system, despite having a smaller economy than Poland’s. It is this country that won a place among the twenty that discuss world affairs each year, although Nigeria, which is less stable, has a larger economy and a higher birth rate.