30.04.2015
A stagnant European Union and growing geopolitical problems in Russia are forcing Poland to look further afield for export markets, with some success; the government’s two-year-old GoAfrica programme has boosted trade with Africa by 25%.

While Poland may not be well known in Africa, it does have advantages: Poles have a recent experience with transformation and they evoke no ill-will as Poland never had colonies. But Polish companies are often too small to penetrate distant foreign markets on their own. “In order to enter Africa, the protective umbrella of the government is needed.” says Sławomir Majman, president of the Polish Information and Foreign Investment Agency (PAIIZ). The government’s GoAfrica programme has been offering just that sort of protection.

It includes a, fact-finding and economic missions, conferences and seminars devoted to individual countries, as well as preparing country guides. The government also helps with by government ccredit agreements under which Poland grants loans to selected countries. They are often concluded once trade partners from both countries have reached a consensus. Poland signed such an agreements, among others, in 2010 with Angola – for €EUR 60m million, and last year with for €50m with Ethiopia. As a result, from 2012-14 trade with Africa increased by 25%.

“Over two years ago we started to assist Poles in going beyond the European cocoon. We have the first results of the GoAfrica programme. Trade with Nigeria, where we sent a trade mission, has increased by 47%,” says Mr Majman. 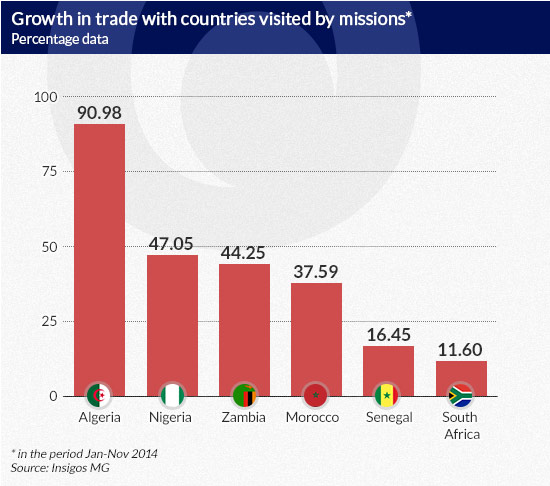 “Exports do not grow due to economic missions, and no transactions are concluded during conferences or meetings; however, indirectly such measures are very helpful,” says Małgorzata Bonikowska, a partner in THINKTANK – the Centre for Dialogue and Analysis and president of Poland’s Centre for International Relations.

“Diplomatic support is of key importance, particularly, as regards government contracts,” says Ms Bonikowska. “The purchase of Ursus tractors by Ethiopia and the strong position of [chemicals company] Azoty in Senegal are successes of Polish companies strongly supported by the so-called economic diplomacy.” 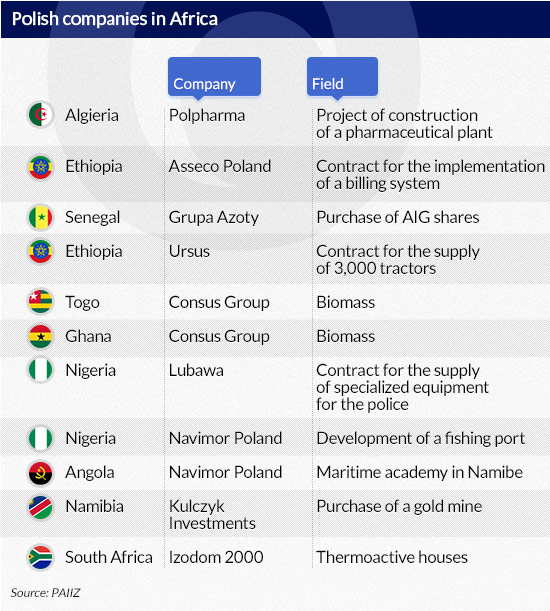 The government is keeping up the momentum. According to Katarzyna Kacperczyk, deputy minister of Foreign Affairs, Senegal has become an important trade destination. Poland is opening an embassy in Dakar and Poland will be visited by a mission of Senegalese companies. New destinations for expansion include Mozambique and Botswana.

This year, Poland will host missions from South Africa, Mozambique, and Congo and send economic missions to Ethiopia, Tanzania, Angola and South Africa, and a fact finding mission to the Democratic Republic of Congo.

The last two decades have seen an important transformation in Sub-Saharan Africa, as the ending of conflicts in countries like Congo, Ethipia, Angola and Mozambique has sparked economic growth.

“In some countries troubled by internal conflicts for many years, the situation has become stable,” says Ms Bonikowska. “When wars end, the government awards contracts for road and railway infrastructure, municipal transport fleet, construction of hydroelectric power plants, IT systems, and chemical, electronic and agricultural products.” She argues that some African countries – despite political problems – are experiencing an economic boom. Nigeria, South Africa, Ethiopia, Kenya and Tanzania represent very promising markets for Polish goods and services.

“Poland’s trade with the majority of African countries is still marginal, amounting to several million dollars, but the activities of companies and the GoAfrica programme are helping to change this,” she says.

A drop in the ocean

Trade with Africa grew in 2012-2013 by $800m, next to nothing compared to Poland’s overall exports totalling $181bn. The bulk of Poland’s exports are aimed at developed nations, and less than 10% goes to developing countries.

Growth in exports is nothing exceptional. In the years 2000-2014, the majority of countries presented in the UN database (Commodity Trade Statistics) demonstrate high export growth, e.g. Turkey – 336 per cent, Hungary – 273 per cent, Great Britain – 123 per cent, Russia – 513 per cent, Poland – 316 per cent, USA – 152 per cent, Sweden – 136 per cent, and South Korea – 356 per cent. Countries exporting less than at the turn of the century are few and far between. However, experts agree with the government – it is necessary to fight for Africa.

“The domestic market was initially big enough to ensure sales to Polish entrepreneurs. Over the last two decades, the Russian and the EU markets have been an excellent supplement. At present we face a political problem with the first one, whereas the second one is experiencing economic difficulties, and the domestic market is already saturated. Polish companies must search for opportunities in other destinations to continue their development. Africa is a very promising market and it is necessary to try to be present there,” believes Małgorzata Bonikowska.

According to the International Monetary Fund, 10 African countries will be among the 20 fastest developing economies in the world in 2011-2015, including Ethiopia, Mozambique, Tanzania, Congo, Ghana, Zambia and Nigeria. Today Poland’s trade with Africa amounts to 1 per cent of the total. Government representatives see the potential to increase it to 3 per cent.

In that case, what is the best possible way to do this? Maybe Germany should be taken as an example? Germany’s trade with Africa in 2013 totalled EUR 44.9 billion, amounting to 2.3 per cent of its total trade volume. Germany’s biggest trading partners include South Africa (EUR 13.3 billion), Libya (EUR 5.6 billion) and Nigeria (EUR 5.5 billion). As can be seen, they generate over half of the total trade volume. Nigeria accounts for 71.8 per cent of imports and 54.1 per cent of exports of Germany to the whole of West Africa. Perhaps concentrating on a few selected markets is a better strategy than tapping several dozen ones? However, Poland does not compare to the world powers.

“Great Britain and France, as well as Germany, Belgium, the Netherlands, Portugal, Spain and Italy had their colonies and interests there for centuries. Colonialism finished a long time ago, but the relationships have remained. The governments of African countries are searching for an alternative to the economic dominance of the former powers, increasing their trade with the Middle East, Asia and South Africa. The scale of Chinese investments is so huge today that it evokes suspicions of a possibility of a second wave of colonialism. At the same time, Africa still appreciates Western products, quality and technologies.

Therefore, Poland is a desired partner: it is a country in the heart of Europe however, with no historical burden. In addition, it is a country which has educated several thousand African citizens who often represent the political, business or scientific elites in their countries today. The best ambassadors of Poland are people who studied in our country; some of them still speak Polish very well today and have a sentimental feeling for our country”, says Małgorzata Bonikowska.

In her opinion, Poland is still searching for its strategy for Africa.

“For the time being we are on a reconnaissance mission. The countries in which the Polish government gets more involved are chosen rather haphazardly. This often results from the presence of a Polish company in a given market, or from the favourable political climate based on personal relations or good past experience. The economic potential of the country is also important as well as for the opportunity for Polish companies to be awarded contract, e.g. public procurement contracts in the sector where we have something to offer, the possibility to continue cooperation launched many years ago.

Entrepreneurs are consulted on African markets they are interested in and on places where they intend to increase their presence. The successive economic missions, political visits, economic fora, commercial contracts and investments are slowly increasing Polish presence and interests in Africa. However, the continent inhabited by a billion people and comprising 54 countries is too big for Poland: at the next stage we should make a choice and focus on several markets which are the most important for us,” believes Małgorzata Bonikowska.