Poland will not grow as fast anymore

28.11.2012
The Conference Board, almost a hundred years old global business organisation, published its economic development projections several days ago. The projections say that between 2013 and 2018 Poland’s GDP growth rate would be 1.9%, and 1.5% between 2019 and 2025. The pessimistic option is that the growth would be ca. 1% a year, while optimists say it would be 2.7% and 2.0%.

Should it turn out true, it means in the decade to come economic growth will not be visible to ordinary citizens. Out of the long-term projections I have come across, which are discussed below, this is the worst one. It does not mean, however, that we should disregard it as extreme.

Applying the same methodology by the Conference Board (CB) post factum to the period 1999-2005 in Poland produced a perfectly accurate result (3.4%), and for the following period it produced an understated result (3.4%) as compared to actual annual growth of 4.3%. Luckily, it would mean that if there is a deviation from the basic scenario, it would rather be higher than lower.

The results of CB analyses show what our intuition tells us, namely that Europe may face a ‘lost decade’ due to the euro area crisis, demographic and fiscal problems, and politicians’ inability to solve the problems of systemic integration in the European Union.

Warning forecast by the Conference Board

Let me now briefly describe the methodology applied by the Conference Board (details can be found here).

CB analysts apply the function of production that divides GDP growth factors into capital input, labour input and other factors that are assumed to reflect technological progress and Total Factor Productivity (TFP). In the case of labour, the important aspects are its quantity (resulting from demographic forecasts and assumptions on labour force participation rate) and quality measured by the education level.

Capital outlays and resources include not only assets (hardware), but also stocks, management quality, savings rate, openness of the financial system, share of industrial production and many other variables. TFP is a residual value calculated on the basis of previous periods, that measures technological dynamism and long-term technology changes. Please note that the optimistic variant assumes twice as fast increase of TFP (if it was positive in the basic variant) and nil (if it was negative).

In short, there are three growth factors: labour, capital and technology. Now, the question is what they are for Poland as compared to other countries, as that should explain where the poor general forecast comes from. The labour is surely the factor that drags the figures down: the annual increase it triggers in Poland is -0.4% in the first period and -0.5% in the second one in terms of labour quantity, while the increase in labour quality is minimal, only 0.1% a year.

The situation is similar in other countries, although the losses of Hungary and Germany were slightly lower in the first period. We will compare other factors (capital and TFP) by assuming the years 2006-2012 as the reference period: 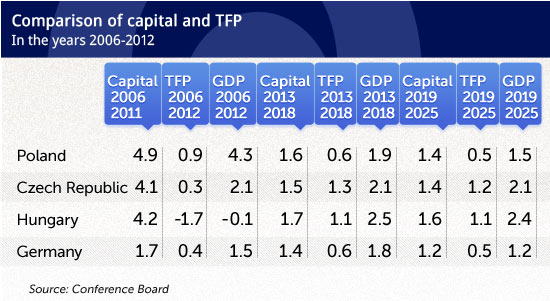 Thus, the slowdown in the growth rate was due to lower pace of economic growth generated by capital and TFP. The capital factor has been decreasing also in the Czech Republic and Hungary, but the TFP factor has been increasing. Germany generally maintains a stable growth rate of GDP and of individual factors in the periods under analysis.

It can be interpreted that our southern competitors would be able to benefit more from technological changes and improve production efficiency better than Poland. We will not be able to do that. Another comparison: while Poland is undoubtedly a country with a lower level of technical and technological development than Germany, we will enjoy a similar pace of economic growth generated by TFP in the coming years. Improvement in the area of production efficiency and technical and technological progress is a direction that is obvious for both enterprises and the government.

How else could our chances be improved? The CB model does not take changes in the employment rate or the pension system into account. Undoubtedly, extending the working time (postponing retirement age) will bring about a positive effect. Similar effects would most probably be achieved by enhancing the employment rate by way of regional diversification of the minimum pay and restraining its growth (a very interesting paper on this subject by Aleksandra Majchrowska and Zbigniew Żółkiewski from the NBP is going to be published).

It would also be worthwhile not to allow such a sudden decline in the significance of the capital factor. Perhaps the CB model underestimates the changes resulting from the investment recovery resulting from the inflow of European funds that will not disappear in subsequent periods. In addition, a higher rate of savings in the economy and restrictions in driving out of private investments by the budget and public finance deficit would undoubtedly be beneficial.

Summing up: the CB forecast should be treated as a warning, particularly in the context of earlier  HSBC and the European Commission forecasts that were more favourable to Poland.

HSBC claims it to be only slightly better

In January, HSBC published the results of analyses of economic growth until 2050. The bank’s analysts applied a slightly modified Barro’s model  that takes two sets of variables into account. The first set is connected with human capital (education, fertility and health measured by life expectancy), while the other set covers investment conditions, or the so-called economic infrastructure. It includes, inter alia, indicators that describe the rule of law, influence of authorities over the economy measured by GDP consumption by the government, democracy indicators and monetary policy measured by inflation.

The results? Over the 2010-2020 decade, in the basic HSBC scenario economic growth in Poland is 3.3%, and 3.2% in the next decade, i.e. it is much higher than according to the CB, but lower than in the Czech Republic (4.6% and 4.4%, respectively) and in Hungary (4.7% and 4.7%). According to the HSBC projection, the increase in income per capita is even higher (for Poland, it is 4.0% and 3.9%, respectively), probably due to shrinking population, but it is surprising that the phenomenon would have its effect already in the current decade.

It is interesting that HSBC analysts also tested two variants of government’s effectiveness in building the economic infrastructure. When there is no progress, the growth rate of income per capita would decrease from decade to decade starting from the period of 2020-2030, initially by 0.5 pp a year, and over the 2040-2050 decade even by 1.5 pp. But if the government improves economic infrastructure at the level similar to the leading countries, income increases in subsequent decades by between 4.4% and 5.1%. According to this model, there is still a chance for stable high economic growth.

Another interesting forecast  was published by the European Commission in mid-May. Similarly to the CB, it takes the labour factor, TFP and capital outlays into account. According to the Commission, growth per capita that amounts to 3.2% still in 2015, declines to 2.0% in 2020, 1.8% in 2025, and further on gradually ever more (to 1.0% in 2050). The figures are thus quite similar to the CB calculations in the initial periods, although comparison is difficult: the CB calculates the growth in general, while the Commission calculates it per capita. The Commission’s assumptions are described in great details. It is assumed that beyond 2020 population and employment would decrease gradually.

What do the projections tell us? The figures are not the most important, but the trends they show are.

Firstly, it doesn’t seem we should expect high economic growth, of let us say 4-5%, in the decades to come. Smart economic policy may increase it, but not so much, as it is difficult to imagine that Poland   becomes world’s leader in economic infrastructure.

Secondly, there are serious demographic and institutional threats. Therefore, measures for higher labour force participation are so important.

Thirdly, the threats to the economy, knowledge, innovation and technology are serious. Simple popularisation of higher education would not yield such positive results as in the past decades.

We may know it all, we event try to counteract the unfavourable trends (retirement age, changes in the job agency system, incentives to have more children, programmes to support science and innovation, stimulating investments). Yet, intuition tells us it is too slow, too little is done and too cautiously. The pessimistic forecast of the Conference Board is an additional warning.