22.01.2014
Four new countries, among them Poland, will be audited as part of the IMF’s Financial Sector Assessment Program (FSAP). The program assesses financial systems in countries where a crisis would have a significant impact on the global economy, either due to the size of that country’s economy or its interconnectedness with others. We’ll be more important, but also subject to more frequent assessment. 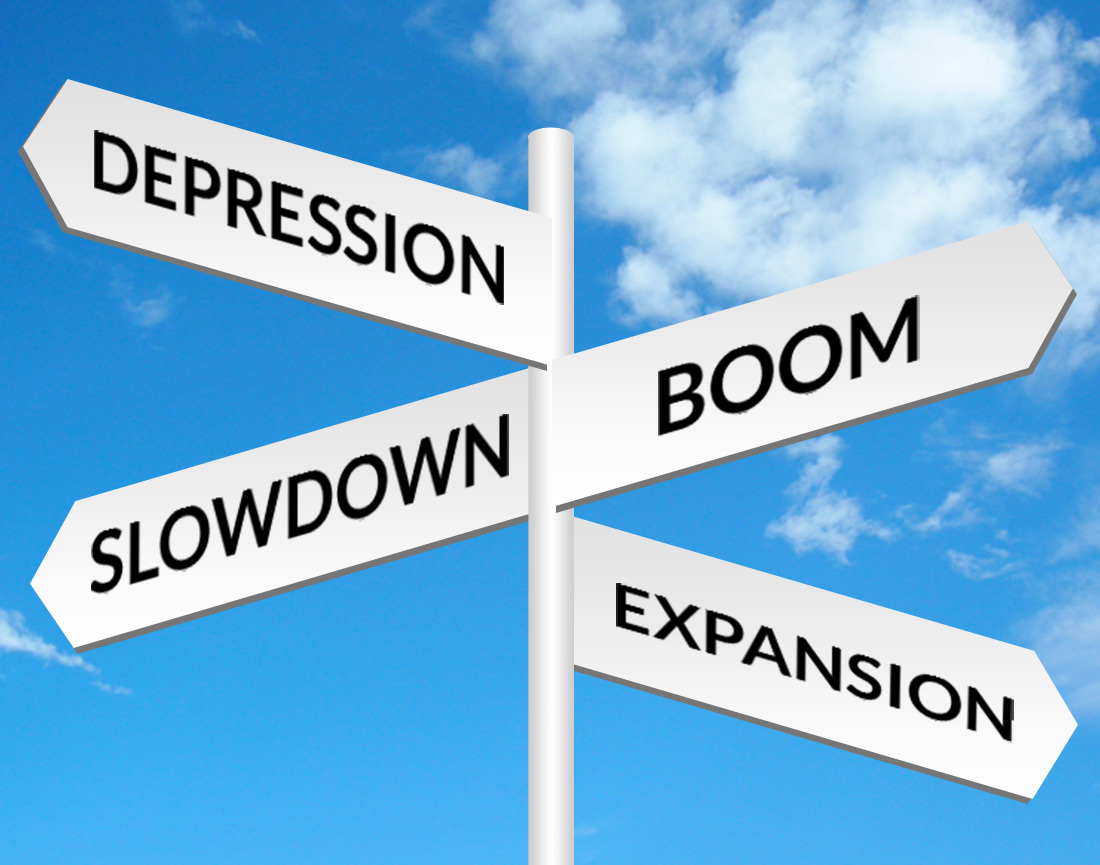 It is worth noting that while Greece, Portugal and Cyprus have gone through major financial crises they are not among the countries considered “systemically important.” Poland is the only Central European country (apart from Russia) considered important from the perspective of global financial stability.

“Systemic importance” is not a solid category, but a fluid one. It depends on the criteria employed. It also depends on the overall condition of global financial markets, as well as reflecting to some extent the subjective perspectives of market participants.

Moody’s Investors Service notes that being on the list of countries receiving mandatory IMF assessment will increase supervision of Poland’s finances but will also improve the country’s profile. Currently Moody’s ranks Poland as A2 – stable, while Denmark, Finland and Norway are ranked all ranked higher at AAA – stable. By adding Poland to this group the IMF is acknowledging the importance of the Polish financial sector and its strong ties to the sectors of other states.

The remaining IMF member countries can voluntarily request an assessment of their financial systems by IMF experts. Since 2010, 24 countries considered systemically important have been assessed or soon will be. Finland was scrutinized in 2010, Poland in 2013. Denmark will be assessed in 2014 and Norway in 2015. 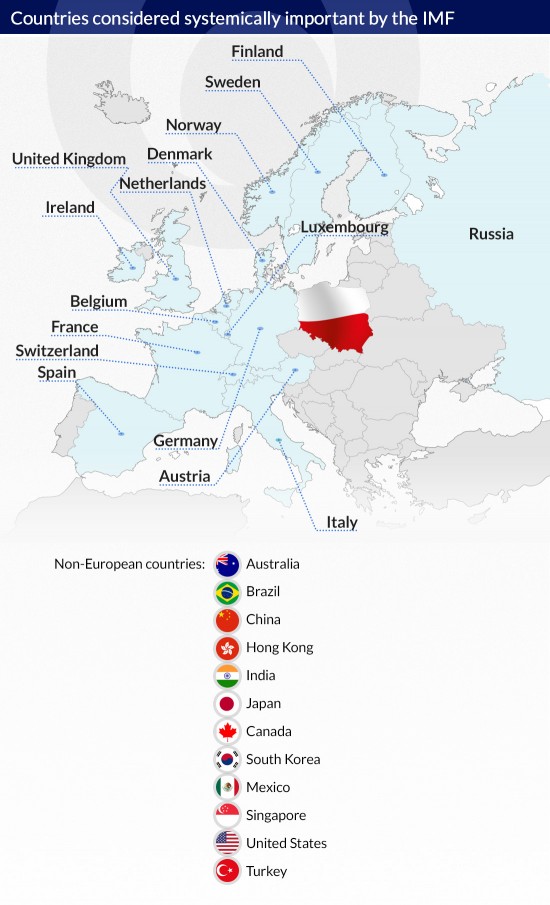 Since 1999 the IMF has verified the financial sectors of various countries on a voluntary basis. The three most important areas of assessment are:

IMF experts consider each state as an individual case, looking for the threats that arise from each country’s specific situation. Following an assessment IMF experts prepare reports, which contain recommendations for improving financial stability.

On the 21 September 2010, following a proposal made at the November 2008 G-20 summit, the IMF decided that the financial sectors of 25 states would be assessed every 5 years. The states were chosen depending on the size of their economy, as well as their influence on the global economy.

All 187 IMF member states are obliged to undergo an annual assessment of the condition of their economy – the so-called Article IV Consultations. The FSAP constitutes a further, comprehensive assessment of the financial sector. Almost three quarters of IMF members have so far submitted to FSAP procedures. For developing and emerging economies an element of the FSAP is an analysis by the World Bank of growth in the financial sector and its structural aspects.

The FSAP assesses the safety of banking systems and financial sectors in general. It rates the quality of financial markets and checks if they are consistent with international standards. So-called stress tests are also conducted as part of the FSAP to analyze how banks would react in extreme situations. The ability of politicians, the administration and financial institutions to deal with a crisis is also appraised. The FSAP assessment does not focus on particular banks and financial institutions, but rather aims to find the weak spots in the financial system that might lead to a crisis.

The quality of legal frameworks and financial infrastructure is also scrutinized, for example systems for financial settlement. Obstacles to growth, competitiveness and the effectiveness of the financial sector are identified, as is the accessibility of banking services and the development of capital markets.

The final ranking was decided by combining the two criteria. First place went to the United Kingdom’s financial sector, due to its strong international connections. Germany followed, with the United States only in third place. Japan, although its economy is large, came fifth in the ranking because of its relatively low interconnectedness.

The size of the financial sector was calculated according to four indicators: the amount of currency and deposits calculated in dollars, the balance sheet of the banking sector, the international investment position in dollars, and the financial “depth” of the economy measured as a share of currency and deposits M2 to GDP. The four indicators were scaled according to the country’s GDP (measured in PPP) relative to global GDP.

The interconnectedness of the economy was measured according to a model of bilateral interbank exposure. The data were taken from the Bank for International Settlements. Four indicators of “network centrality” were considered: the number of financial connections, the average of the shortest path from one jurisdiction to all others, “betweenness” i.e. those countries that the shortest path goes through, and the prestige of the financial sector i.e. its importance to the counterparties with which it is connected.

Last year the IMF criteria for determining the systemic importance of a state were redefined. Experiences from the 2008 financial crisis were taken into consideration, as well as the Eurozone crisis, which was ignited not only by over-extended bank balance sheets and bad debt (caused by the real-estate bubble) but also by the over-indebtedness of many states. Also taken into account were reports published under the FSAP.

The 2010 methodology overvalued the size of the financial sector and the overall size of the economy. In fact even a relatively small economy with a financial sector closely interconnected with the sectors other countries can bring about an international financial crisis. The crisis can spread in many ways. Not only through mutual bank exposures, but also through investments in foreign debt and obligations on foreign stock exchanges.

Using this methodology the IMF added four new states, including Poland, to its list of 25 systemically important economies. Poland is on the list mainly due to the high degree of internationalization of our banks. International banks own most of Poland’s and therefore a crisis at a Polish bank would have repercussions in banks outside our borders.

“Poland’s financial system seems to be steadfast,” we read in the report. “The economy survived the global financial crisis and the Eurozone crisis thanks to correct management and strong fundamentals. The main risk factors are well known, they are; slow economic growth both outside and within the country, rising unemployment and a drop in house prices. Fragility in the financial sector arises from Eurozone ties, exposure to currency risk and foreign investors, which may put pressure on the bank funds, especially if there is a lack of long-term sources of state financing. The banking system was profitable and maintained a high level of core tier-1 capital.”

Stress tests conducted on banks showed that the probability of a banking crisis is low. The large number of loans in foreign currencies concern IMF analysts, however the report states that only a very difficult situation could lead to the insolvency of some of the smaller banks. The risk of a banking crisis spreading is low because there is little interconnectedness among banks.

The report emphasizes the weakness of Polish credit unions [SKOKs], but due to their small size it does not discern a systemic risk. The report also mentions non-banking loan companies, used most often by clients not considered credit worthy, but their influence on the stability of the financial sector is limited.

The report considers supervision of the Polish banking sector to have improved and declares that banks are following the recommendations of the Basel Accord. However, the report highlights that under Polish law banking supervision does not have the power, independence or resources to entirely fulfill its role.

The report emphasizes that the Polish financial sector should develop in the direction of a greater role for the capital market. Changes to the pension system should be developed with caution, as pension funds could play an important role in the demand for assets. IMF experts see the possibility of lowering currency risk on mortgages through credit securitization and issuing bonds secured by mortgages.

The report outlines 7 recommendations for the Polish financial sector:

1)      Resolving the problem of irregular loans, (through improving credit risk management; standardizing and increasing the transparency of bank accounting and standardizing the calculation of the debt-to-income ratio).

2)      Strengthening banking supervision (extending the competences of the Committee of Financial Supervision (KNF) to include legally binding prudential regulation, authorizing the management board of KNF to delegate decision making powers to the KNF supervisory board, increasing the independence of the KNF, as well as increasing the analytical competence of the KNF by allowing it flexibility in allocating its budget and staffing).

3)      Strengthening SKOKs (by eliminating double supervision, achieving the required solvency ratio of 8 per cent within 5 years, by introducing accounting principles applicable in financial institutions to the credit unions and by strengthening the capital of financially weak unions).

4)      Developing a sound macro-prudential policy (lead by the independent central bank, the National Bank of Poland)

5)      Improving the frameworks for bank resolution (which means ensuring the primacy of administrative powers before corporate insolvency procedures, ensuring that the claims of the Banking Guarantee Fund (BFG) have priority, taking into account the capital requirements of tier-1 in financial stabilization).

6)      Improving the system for insuring deposits.

7)      Strengthening pension reforms and capital markets (including the introduction of life-cycle strategies in pension funds.)

This last recommendation has not been fulfilled. On the contrary Poland has recently taken steps to dismantle the capital pillar of the pension system, a move decidedly far from IMF suggestions. 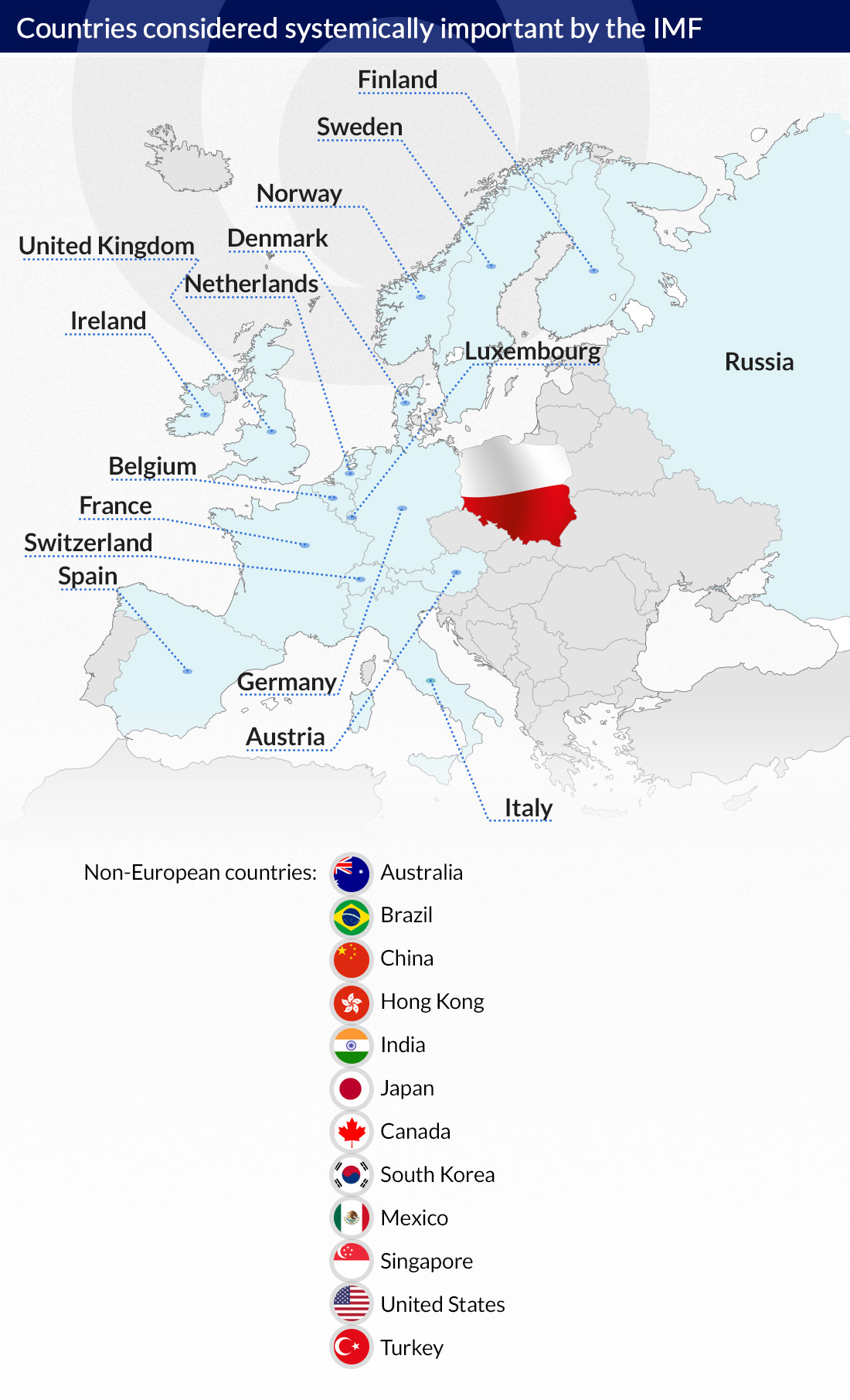