05.02.2020
Poland has already passed the halfway point in the construction of its basic network of motorways, expressways and rings. These are very expensive investments, but they provide a fast return on the investment. In some cases, the new roads pay for themselves within one year. 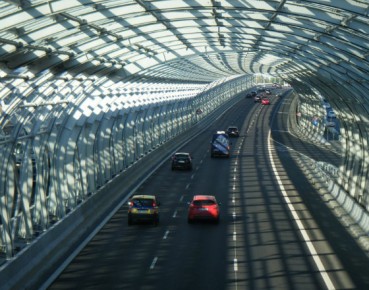 In 2008, UEFA decided that the 2012 European Football Championship (Euro2012) would be held in Poland and Ukraine. This decision led to a breakthrough in the construction of motorways, expressways and rings in Poland, as it mobilized the government to significantly accelerate the construction works.

Up to that point the development of the road network proceeded at a very slow pace. Suffice to say that in 2008, Poland had only 993 km of motorways and expressways. For comparison, today the highway network in Poland is 4 times larger, reaching nearly 4,000 kilometres, of which 1,675 km are motorways and 2,300 km are expressways.

Expansion of the road network

For more than a decade the construction of highways and ring roads has accounted for the single largest share of public investments in Poland. As a result, driving has become faster, easier and safer (the most serious car accidents are head-on collisions, which do not occur on divided highway), and people are spending less time in traffic jams while travelling across the country.

Only few sections of highways will be left missing before the road network is fully completed. Additionally, the government is planning to expand the target network of highways in Poland even further, adding more expressways, which will take at least five years to be completed. However, the basic network should be ready in the years 2021-2022.

The budget of the “National Road Construction Programme for the years 2014-2023 (with a perspective until 2025)” is EUR33.5bn and the vast majority of these funds are allocated to highways and rings.

Motorways, expressways and rings are costly investments. According to a report “Highways to the borders”, prepared by Multiconsult Polska, the cost of building one kilometre of motorway in Poland is — based on the example of the A1 motorway — between EUR6m (in non-urban areas and with the use of an existing expressway) and EUR32m in the case of Silesia, which is a heavily urbanized area affected by mining damage. This amount includes not only the cost of the actual construction (with bridges, viaducts and tunnels being the most expensive), but also the design works and the purchase of the land intended for the newly built road.

Because of the EU’s environmental requirements, it is sometimes necessary to introduce changes in the planned expressways or rings, which can result in construction delays and slightly longer routes.

It’s not surprising that such requirements are heavily criticized. Opponents argue that when Western Europe was building its motorways and expressways, it wasn’t bound by such restrictive and costly environmental protection regulations (because the EU had been introducing them gradually for many years). As a result, Western European countries were able to build their roads much faster and cheaper, which seems unfair to some.

However, these critics are forgetting about two important things. First of all — the EU is providing very generous co-financing for these investments. Secondly — Poland still has a natural environment that is better preserved than in the Western Europe. Poland has a lot more areas that are either unaltered or slightly altered by human activity: forests, river valleys, mountain ranges, etc.

Besides, even with such elevated costs associated with environmental protection measures, for Poland the construction of highways is one of the most beneficial investments and has a very short payback period. Roads are sometimes described as the circulatory system of the economy. For many years Poland had been losing to the Czech Republic and Slovakia in the competition for large FDI and the main reasons was a lack of proper roads.

A few years ago, Poland’s losing streak ended, largely due to the fact that it finally started catching up in terms of the network of expressways and bypasses. Foreign investors came to realize that Poland would soon have good roads as well.

Poland was taking advantage of its very good (from an economic point of view) location as a transit country. New manufacturing plants and logistics centers started springing up like mushrooms in places located along the newly constructed motorways and expressways. This was the case, among others, in Stryków near Łódź (central Poland) and in Gliwice (Upper Silesia region), which have become some of the fastest growing places due to their location at the intersections of newly built motorways.

The automotive company Mercedes-Benz is building its manufacturing plants in the city of Jawor thanks to the S3 expressway, which was completed a year ago and connects the town with the nearby A4 motorway. Sieradz (central Poland) also attracted several large investors thanks to the expressway between Łódź and Wrocław (western Poland), which was built a few years ago.

In Inowrocław (central Poland), where two important national roads merge, thanks to the newly constructed ring, the interest of investors increased so much that almost all the plots of municipal land allocated for commercial development were sold.

There are many other similar examples. The most encouraging aspect of these developments is the fact that thanks to the newly-built expressways, private companies started large investments in relatively peripheral towns which previously were stagnant and had no opportunities for development.

However, it is also worth looking at the benefits from the construction of highways in a broader context. Such a perspective is presented in the analysis prepared for the Ministry of Investment and Economic Development.

The main — and most valuable — part of the work is devoted to an estimation of the economic efficiency of the motorways, expressways and bypasses built in Poland, and especially their payback period, that is, the amount of time that is necessary for these investments to “pay for themselves”.

When calculating the payback period the authors of the analysis took the following factors into consideration:

The researchers calculated how the impact of these factors translates into monetary value and compared them with the costs of construction and operation (road surface wear, maintenance, repairs, etc.) of a given highway section. In this way they calculated the payback period of 55 sections of already built motorways, expressways and rings, the ones under construction, and the planned ones. In the case of 12 sections, the estimated ROI did not exceed 2 years, and in the case of 21 sections it did not exceed three years. In half of the analyzed highway sections the payback period was no longer than 5 years, and in the case of almost two-thirds of the road sections it was shorter than 10 years. 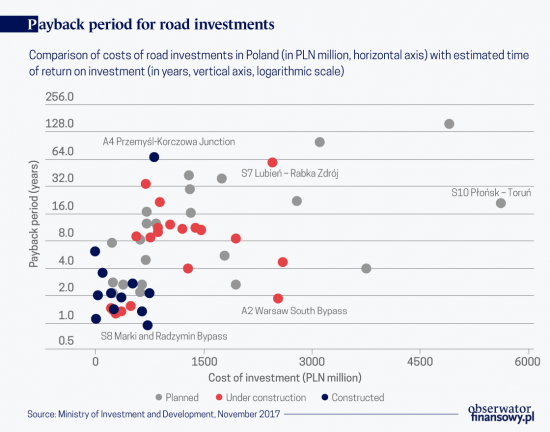 Of course, there are also investments with a very long ROI, reaching 20-30 years, and even more. However, this does not mean that they should not be completed. Usually it is due to exceptionally expensive construction of a given highway. This mainly applies to roads built in mountainous terrain, which require bridges and very expensive tunnels. This is why the construction of the mountain sections of the S7 (the popular “Zakopianka” road, from Cracow to Tatra mountains) is extremely expensive.

The long ROIs is also in the case of highways built on routes where the traffic volumes are lower than those on the busiest roads in Poland, but still high enough to necessitate the construction of an expressway or a motorway. This is important considering the fact that the volume of traffic on Polish roads is growing rapidly along with the quickly increasing number of cars.

If the Polish state had not responded to these developments with large-scale investments in infrastructure and intensified construction of expressways and bypasses, the situation on Polish roads would have been truly disastrous. 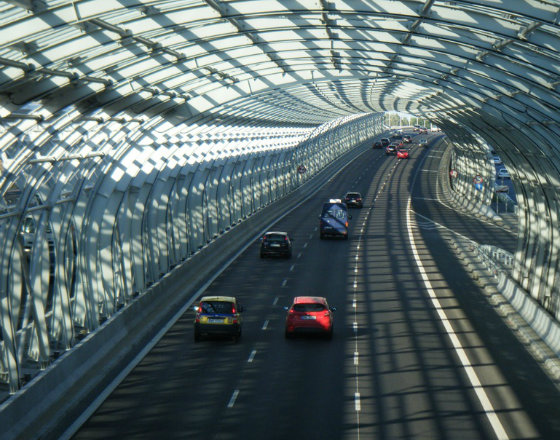 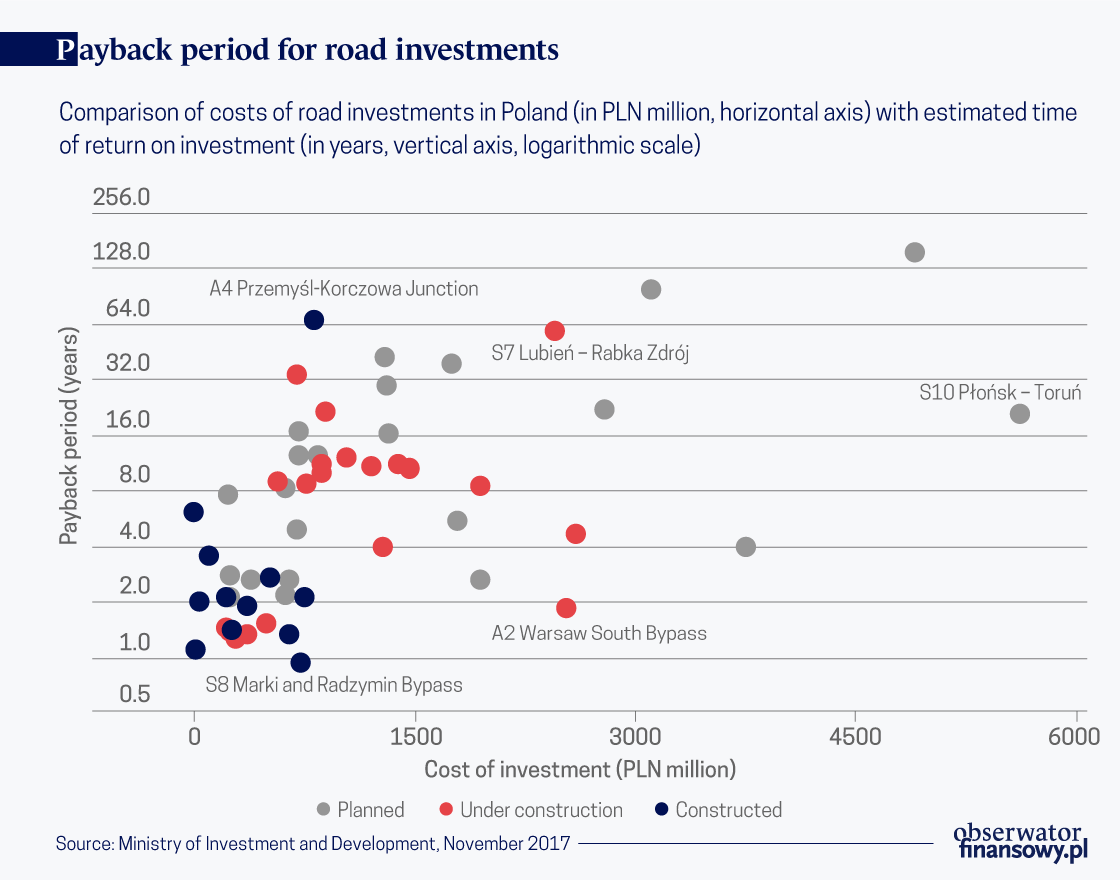