16.01.2015
Poland’s state-owned hard coal mining industry is on the brink of bankruptcy thanks to falling prices and demand, rising costs and a reluctance to close unprofitable pits – all this after billions of dollars were spent in recent decades on reforming the sector.

The coal industry has been one of the biggest failures of Poland’s post-communist reforms. The sector is still largely state owned, mines are generating more red ink than black coal and politicians have tended to run scared of powerful unions, granting miners very expensive pension privileges.

Despite that official concern, the sector’s current situation makes for dire reading. Hardest hit has been Europe’s largest hard coal miner, Kompania Węglowa (KW). Over the summer KW had to sell one of its 15 mines and reach a debt restructuring deal in order to pay its miners’ monthly salaries.

Unfortunately for the two mining companies, the outlook is pretty grim. Coal prices tumbled to four-year lows this year after a mild winter reduced demand and saw stockpiles build at the ports of Amsterdam-Rotterdam-Antwerp. Polish coal prices have dropped 15% since the beginning of 2013. They’re likely to be between 1-3% lower next year, according to PKO Bank brokerage house.

About 85% of the country’s electricity is produced through burning coal and its dirtier cousin lignite. That is down from more than 90% just a few years ago, another warning signal for the industry, as Poland ramps up greener energy alternatives. Demand for Polish coal will likely continue to fall thanks to the European Union’s climate policy making it more expensive to burn and pushing for the   construction of new more efficient coal-fired plants that consume less fuel.

Adding to the industry’s woes, private coal distributors are increasingly turning to foreign (mainly Russian) suppliers of home heating coal, some of which also finds its way to heating plants, further depressing demand for Polish coal.

The two Polish coal miners have responded to these tough conditions by overproducing – leading to growing stockpiles of unsold coal at their mines.

As well, exports have become less and less profitable thanks to a combination of low coal prices and the rising cost of production. Since 2006, exports have halved and unit production costs have risen by 73%. Those higher mining costs are the result of the age of Silesian mines – coal mining started in the region in the 17th century. That means most of the easily accessible coal has been mined. What’s left lies deep underground and costs are driven upwards by the risk of methane gas and seismic movements.

The companies are prevented from taking more drastic action by their large and politically powerful workforces. Mirosław Taras, who was fired as KW’s chief executive in November, told a coal conference days before his dismissal that wages account for about 60% of KW’s costs and the company employs twice as many staff as needed.

All this means that unit production costs at KW and KHW are 35% and 41% higher respectively than at the Bogdanka mine in the Lublin basin in south east Poland, which is enjoying rising production and sales and looks likely to end the year in profit. Significantly, Bogdanka is a private company.

KW and KHW’s mines are a mixed bunch, some inefficient and old, others more modern and profitable. All are running at about 70% capacity.

“The smart thing to do would be to say there’s no point keeping the worst five or six mines operating because they are being subsidized by the lower cost mines,” says Przemysław Vonau, managing director of Roland Berger Strategy Consultants, who conducted the first large independent review of the state coal mining sector for the Ministry of Economy late last year.

“What frequently happens is the surplus from the efficient mines is not enough to plug the hole from the unprofitable ones,” he adds.

Just three of KW’s 14 mines were profitable in the first half of this year.

KW has closed unprofitable pits in the past, typically merging them with more economic mines and gradually scaling back operations at the ailing half. But successive governments have shied away from wholesale restructuring due to the social unrest caused by closures. KW alone employs 55,000 staff and, with their families, that’s a sizeable electorate for any government.

The government has created an inter-ministerial team to investigate ways to return the sector to profit and a newly appointed advisor for the sector has promised to publish the plan by the end of the year.

Rising coal prices would of course help. But in the short term, in order to inject cash into KW the state-owned company responsible for exporting Polish coal, Weglokoks, is offering to buy four or five of its mines.

Another much talked about solution is for the country’s utilities to acquire KW’s mines and assume their costs.

“This is an extreme solution, which the politicians, mining and power companies must all agree on. On the other hand, there is intensive restructuring, which is unfortunately painful from the point of view of society,” Taras told the conference.

With parliamentary elections looming next year the government is promising not to close pits. That may be a short-sighted policy, warns Mr Vonau.

“Instead of creating schemes to generate alternative employment, retrain miners and revitalize the region, which in the long term will have to move away from mining, the government seems more focused on propping up the unprofitable mines and maintaining the status quo,” he says.

Category: Business 07.06.2019
As Poland moves towards cleaner energy, it is necessary to ensure that ex-mining areas are brought back to life, including Upper Silesia and the region of Wałbrzych and Konin. 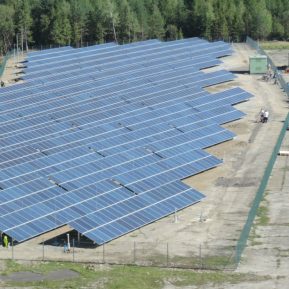