09.01.2016
In November 2015, the Ukrainian parliament decided to extend the expiring moratorium on the sale of agricultural land for an additional year. However, the battle for control over one of the world's largest resources of “black soil” (the chernozem) has just begun. 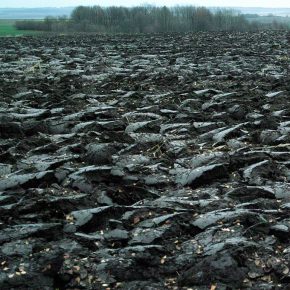 About 15 per cent of Ukrainians ownership of the land is in the now-defunct collective farms ‒ in total they control about 11 million hectares, including the most attractive chernozem resources. The size of the average share is currently 4 hectares. This land cannot be sold. 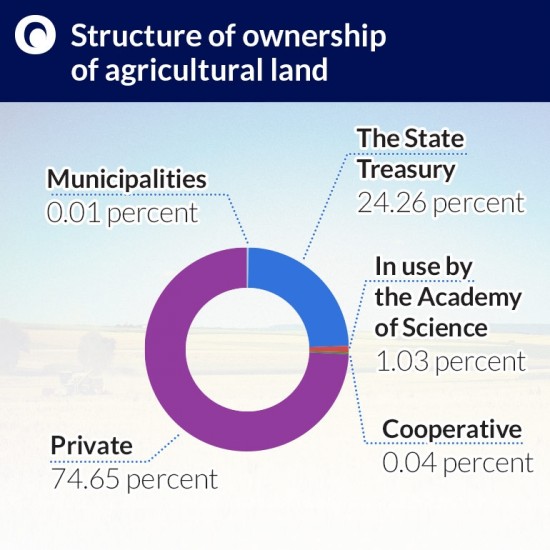 The moratorium on the sale of agricultural land was introduced in Ukraine in 2002 and was initially supposed to last three years. Following the expiration of the original term it was extended several times, and the Ukrainian land code amendment of 2012 assumed that it would remain in force until January 1st , 2016. After that date the market was supposed to be fully liberalized. The Ukrainian oligarchs have already been lining up for the black soil resources for quite some time. This is not surprising, as in the conditions of war and economic crisis the agricultural and food industry is one of the most reliable sources of income in the Ukrainian economy ‒ in 2014 the exports of agricultural and food products brought USD16.7bn, or 31 per cent of the total value of exports. During the first three quarters by 2015, the agro-food sector has already generated 36 per cent of Ukraine’s total export revenues, reaching the value of USD10.2bn.

The Ukrainian President Petro Poroshenko and the representatives of the large agricultural producers want the land market to be liberalized. Poroshenko submitted a proposal for the removal of the moratorium in April 2015, during a meeting of the National Reform Council.

“The president pointed out that the issue of establishing a land market was one of the most important elements in the reform of the agricultural sector,” reported the Deputy Head of the Presidential Administration Dmitry Shymkiv.

“We need to finally abolish the moratorium. Land should be a commodity like any other,” argued Aleksey Poroshenko, the son of the President and a member of the parliament, in an interview with the Ukrainian media in August.

The supporters of the free market of land claim that the continuation of the moratorium is in the interest of the agro-holdings which can lease land from the owners at ridiculously low prices thanks to the fact that trade of land was put on hold. The lease they are currently paying for 1 hectare of land is only UAH300-400 on average, that is USD12–15.

The organizations of agricultural producers estimate that 10-15 per cent of the land owners are ready to sell their land at any moment. According to the economist Andrei Martyn, a supporter of free trade of the agricultural land, they would be willing to sell it at a price of UAH20,000 (about USD800) per hectare. Andrei Koshil, the head of the Land Union of Ukraine provides different estimates. His organization has conducted a survey which showed that the owners would be willing to sell land at the price of USD5,000-10,000 per hectare.

In spite of the moratorium, thousands of hectares of Ukrainian agricultural land have already been acquired by foreign entities. The investment group NCH Capital from the United States leases 430,000 hectares through subsidiary companies, Cargill has a 5 per cent stake in Ukrlandfarming, the largest agro-holding in Ukraine with 670,000 hectares of cultivated land, and the Glencore International holding controls 80,000 hectares of farmlands through a subsidiary.

The poor will lose everything

According to the critics, the liberalization of the market will result in the expropriation of millions of Ukrainians who live in the countryside today. In the opinion of Anatoliy Hrytsenko, the leader of the Civic Position party, which opposes the free trade of agricultural land, the expiry of the moratorium would mostly benefit the oligarchs.

„The oligarch families know the real value (not the crisis value) of the Ukrainian land, and right now they are the only ones who have money to buy it in mass amounts for USD500-1,000 per hectare, so they are already quietly calculating their future profits. And they will be huge ‒ reaching hundreds of billions. Someone will earn these hundreds of billions, which means that someone else will surely lose them. The losers, of course, will be the inhabitants of the countryside. The elites have worked beforehand to ensure the mass impoverishment of the people ‒ through the triple devaluation of the hryvnia (within the last year and a half the official exchange rate of the UAH plunged from 8 to 24 hryvnia per one US dollar) and through multiple increases in prices and tariffs. I know from my own experience when talking to people: right now, it’s very difficult to persuade villagers not to sell their land ‒ which is in fact their wealth and their future ‒ for next to nothing, when they are promised to receive USD2,000-4,000 for 4 hectares of land,” he commented on Facebook.

The fact that the prices obtained for agricultural land released into the market could be abnormally low was also confirmed by the government estimates presented during the announcement of the plans to sold nearly 11 million hectares of agricultural land which is currently owned by state institutions and enterprises. The state budget would supposedly receive USD3bn which is about USD270 per hectare.

A market or a bazaar?

In September, the Prime Minister Arseniy Yatsenyuk ordered the Ministry of Economic Development and Trade, the Ministry of Agriculture, and the State Service of Ukraine for Geodesy, Cartography and Cadastre to prepare a package of laws for the regulation of the land market. “With the currently existing regulations we will have not a land market, but a land bazaar. We cannot allow land to be appropriated and for a class of landlords to emerge in Ukraine. We have to first prepare a package of laws and create a basis for a balanced land market. Only then we should introduce market mechanisms. There is no other way,” said the Ukrainian Prime Minister cited by the press agencies.

According to Yatsenyuk, before the introduction the free trade of the agricultural land authorities must prepare an inventory of land and introduce area restrictions for land directly or indirectly controlled by one person, as well as subject-based restrictions. The ownership of agricultural land should only be granted to Ukrainian citizens and the transactions should be carried out through a state agency by way of tenders organized by it.

The State will decide who gets the land

Building a privileged position of the oligarchs on the agricultural land market has already begun. In autumn, the State Service of Ukraine for Geodesy, Cartography and Cadastre has proposed the introduction of mandatory tenders for citizens leasing their shares in arable land to economic operators. “All land that will be transferred for the conduct of economic activities will be offered exclusively during tenders,” announced the head of the office Maxim Martynyuk.

This is officially supposed to prevent people from being forced to conclude agreements on unfavorable terms, but in reality will simply prevent the development of new farms that could begin operating on the agricultural market, offering tied transactions with non-monetary provisions for land owners or local communities. A local farmer conducting an economic activity, who wants to lease land from his neighbors and offers the renovation of a local school and the guarantee of employment for the locals in addition to payment for the shares, would automatically lose with an agro-holding that simply offers just UAH1 more per 1 hectare of land. In addition, the lessors would have no right to choose in this situation. If the solutions presented by State Service of Ukraine for Geodesy, Cartography and Cadastre enter into force, even if they decided that the offer of the local company was more attractive for them, the legislation would deprive them of the right to freely decide on their property.

If they cannot buy, they will take it for free

In November, a group of Deputies of the Petro Poroshenko Bloc submitted a draft law in the parliament which would allow for giant areas of agricultural land to be taken over virtually for free. In accordance with the Act on the improvement of the investment climate in the agricultural sector, agricultural land held by the state would be leased for 50 years. One of the initiators of the legislation is an MP, Anatoliy Matviyenko, linked with the Avangard agro-holding. Agricultural producers would lease the land for free, and in exchange they would return a part of the obtained yield to the state. After 50 years, the agreement could be renewed automatically with the consent of the parties.

Critics point out that the state would give land worth billions of dollars to the agro-holdings for free, and in addition, there is no guarantee that the lessors would take care of someone else’s land. “50 years is a too long period to plan a business in Ukraine, where any business with a five-year return period is considered risky and unprofitable. It is obvious that the new stewards of the land would try to squeeze everything out of it immediately, because no one knows what will happen in three years. In addition, the draft legislation does not provide for a procedure for the transfer of part of the harvest or the determination of its size,” commented the weekly “Dzerkalo Tyzhnia” which revealed the plans of the MPs. 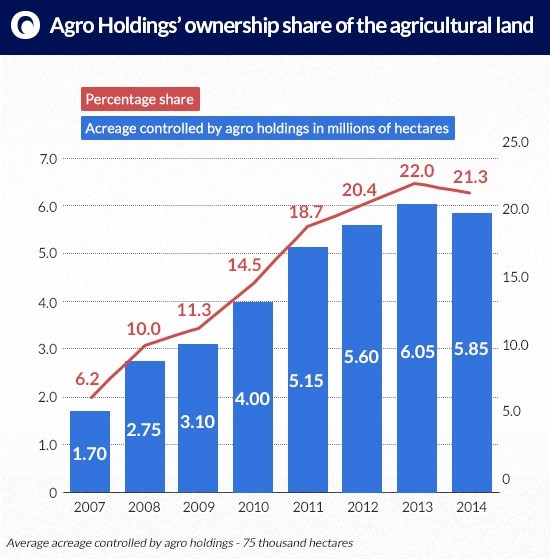 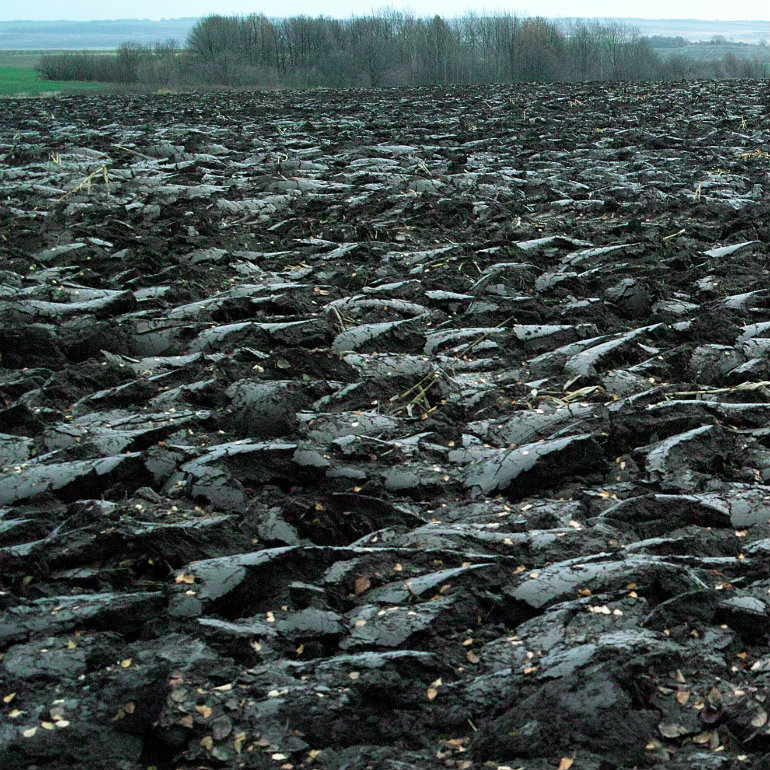 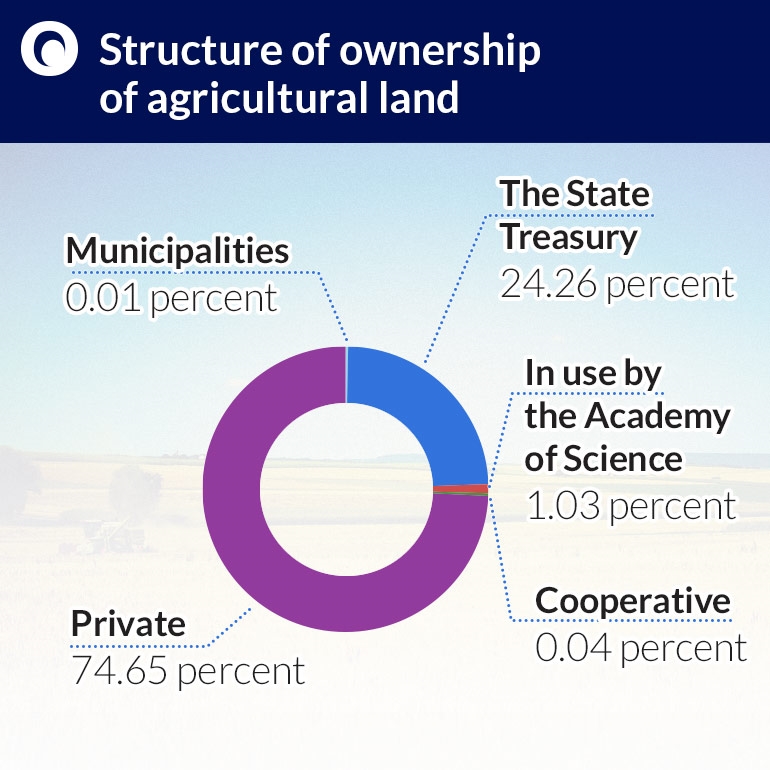 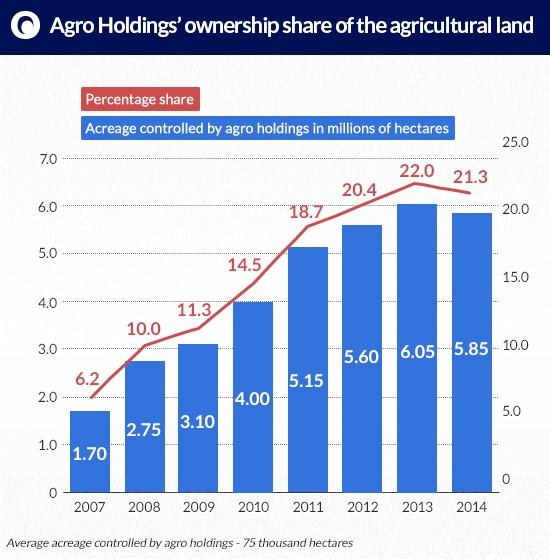