27.11.2018
The Belarusian budget may lose 20 per cent of its annual revenues as a result of the increases of the price of Russian oil. The Russian-Belarusian economic relations are unique in history, but may not last forever. 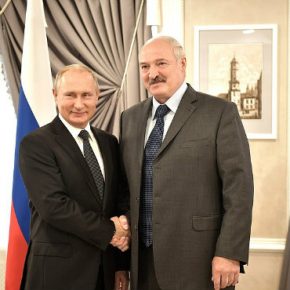 “We are on the frontline. If we don’t survive these years and if we collapse, it means that we will have to become a part of some other state, or they will simply wipe their feet on us,” said the Belarusian president Alexander Lukashenko few months ago. Several days before he said that, the Belarusian deputy finance minister Dmitry Kiyko published an article in the “Finance, accounting, auditing” trade journal. The public official pointed out that the country was facing enormous risks related to the introduction of the so-called tax maneuvered by Russia — a new system for the taxation of crude oil. According to Kiyko, the Belarusian budget could lose 20 per cent of its annual income (about USD2bn) due to the increase of oil prices.

The tax maneuver was initiated in 2014, when the Russian parliament adopted a new law lowering the export duties on crude oil from 59 per cent to 30 per cent in 2017, and lowering to the same level the varied rates of export duties on fuels. The goal of the reform was to eliminate subsidies for the oil refining industry — as the duties on exported fuels have thus far been lower than the duties on the exports of unprocessed crude oil.

It was also supposed to provide financing for the neglected oil extraction industry and to increase tax revenues. The reduction of export duties were combined with an increase in the taxes on the extraction of mineral resources. In May 2018, Russia’s President Vladimir Putin agreed for the export duties to be reduced to zero by 2024, which put an end to the discussions carried out over the past several years between the Ministry of Finance and the oil processing sector.

The end of an era

While the reform was supposed to bring benefits to Russia, for Belarus it meant a complete breakdown of the existing system of energy subsidies based on the supplies of duty-free oil.

According to the Belarusian economist, Yaroslav Romanchuk, the level of Russian subsidies has been steadily declining for a long time. Russia subsidized Belarus the most in the period 2001-2010. During that time the so-called integration grant from Russia reached up to 15 per cent of the Belarusian GDP, or USD10bn annually. This mainly consisted in subsidies in the energy sector — cheap oil, cheap gas and concessions in the access to the Russian market for Belarusian producers. After 2010 the subsidies were gradually reduced, and in 2017 they amounted to approx. 3 per cent of Belarus’s GDP.

Mr. Romanchuk notes, that apart from the cheap energy raw materials, Belarus also receives cheap loans from the Eurasian Stabilization and Development Fund, which granted USD2billion to Belarus in 2016, to be paid out in tranches until 2018. The Russians specifically decided to provide the loan to Belarus through the Russian-controlled Eurasian Union, so that reforms liberalizing the Belarusian economy could be dictated by this institution. Even though Belarus has thus far exhibited feigned interest in pursuing reforms, the subsequent tranches of the loans are regularly disbursed.

Additionally, Russia also pays out state loans to Belarus. This year, the Russian Prime Minister Dmitry Medvedev revealed at a meeting with the Belarusian Prime Minister, that Belarus owed Russia USD6.2bn. The last time Russia lent Belarus money was in September of 2017, when it granted a loan of USD700m. In addition, Russia provided a USD10bn loan for the construction of the nuclear power plant in Astravyets. However, this was a “bundled sale”, as the facility is being built and equipped by Russian companies.

The Belarusian economist and energy expert Tacciana Manionak noted in the Belrynok magazine that since 2015 the Belarusian budget had been receiving the export duties applied on fuels produced from the Russian oil. In 2017, these revenues amounted to USD600m. Additionally, it receives duties from 6 million tons of crude oil, which the Belarusian refineries are not able to process. That oil doesn’t even enter Belarusian territory, but is contracted by Belarus. According to Manionak, in total last year’s revenues in this respect amounted to USD1bn, which is less than the estimates of the Belarusian deputy Minister of Finance.

Over a period of four years the duties on oil will be gradually lowered, and the tax on mineral resources will be increased. When the tax maneuver is completed, Belarus will lose this source of income. Consequently, modernization works are currently underway in Belarusian refineries. They are supposed to ensure that the refineries can still be profitable once they are forced to purchase oil at the prices prevailing on the global markets, i.e. 20 per cent more. Additionally, in order to compete with Russia, the Belarusian authorities will be forced to reduce the excise tax on the internal market.

The Belarusian government demanded a compensation from Russia in the form of a reduction of the price of gas supplies, even though Belarus currently pays much less for Russian gas — only USD129 per 1,000 cubic meters — than its Western recipients. The negotiations took several months and discussions focused on the size of the compensation the Belarusian economy should get. On November 21st, 2018, according to Reuters quoting RIA news agency, Russian Finance Minister Anton Siluanov said that Russia would compensate Belarus next year.

What do you have to offer?

However, Andrey Suzdaltsev from the Moscow-based Higher School of Economics believes this will not compensate for the loss of budget revenues from the customs duties on oil and fuels, because Belarus cannot re-export gas to the West.

Ms. Manionak emphasizes that unless there is a significant deterioration in the country’s economic situation, Belarus will not sell stakes in its refineries, which have just been modernized at an enormous cost. She points out that the modernization of the refinery in Mozyr alone cost USD1.7bn. The Belarusian authorities are very careful not to lose control of the oil processing industry. When the Russian company Rosneft wanted to buy the refinery in Mozyr a few years ago, Belarus demanded a prohibitive price and the deal was not concluded. The Belarusian authorities hope that the modernized refineries will now be able to achieve profits by processing oil from various sources and will become independent from Russia. There are already attempting to import trial batches of oil from Iran to Belarus.

Mr. Suzdaltsev argues that Belarus has little to offer to Russia outside of the refineries as Russians are only interested in one company, Belaruskali, which manufactures potash fertilizers. The remaining part of the Belarusian industry is not attractive to Russia.

Belarus will also seek new opportunities for economic development. According to Ms. Manionak, this will include, for example, the IT industry. She notes, that the country is already obtaining a higher income from the exports of food products than from the export of fuels. Mr. Lukashenko set a goal for public officials to increase the revenues from food exports to USD7bn this year. The only problem is that this sector is also mainly dependent on Russia. Belarusian exporters have encountered resistance from Russia, as it blocks imports of Belarusian milk, dairy products and meat, claiming that the suppliers do not meet the applicable sanitary standards. This is a serious blow to the plans of the Belarusian administration.

According to Mr. Suzdaltsev, the integration between Belarus and Russia has come to a dead end. He admits, that the asymmetric nature of the Russian-Belarusian economic relations is unique in history, but cannot last forever.