The Ukrainian trade deficit is growing and the country is not able to break its economic dependence on Russia, despite the association agreement with the European Union (EU).

This year a further deterioration of the trade balance should be expected. According to the Ukrstat, after the Q1’18 the balance is negative, and the deficit amounts to USD135m. This doesn’t seem very high, but in the same period of last year Ukraine recorded a surplus of about USD126m. The changes in the trade volumes are also working to Kiev’s disadvantage — in comparison with the first quarter of last year, exports increased by 9 per cent and imports increased by over 11 per cent.

The supporters of Kiev’s pro-Western economic course compare the trade data for the entire EU with the data for Russia. In May the Ukrainian central bank, NBU, presented an analysis showing that trade between Ukraine and the EU is growing rapidly. In 2017, Ukraine’s economic relations with the countries of the European Union deepened. Their position as Ukraine’s main trading partners has strengthened to a large extent. The EU’s share in Ukraine’s exports reached 36 per cent and was the highest since 2004.

The European Union has also become a leader when it comes to Ukraine’s import of goods — in 2017 its share increased to 41 percent — mainly due to the increased purchases of natural gas and machinery. EU companies account for almost half of Ukraine’s total machine imports. The growth in imports is stimulated by the high demand from the Ukrainian agricultural producers and a recovery in consumer demand.

“Despite the positive changes, Ukraine’s deficit in trade in goods with European countries is maintained due to the high share of goods with high added value in Ukraine’s imports. The acquisition of new markets by Ukrainian exporters is hampered by the long and expensive process of bringing Ukrainian products up to European standards,” stated the authors of the report.

However, many analysts point out, that the EU is not a single state organism and each member conducts its own economic policy. Therefore, it would be more honest to compare data on the trade exchange with individual states. According to this approach, Russia remains Ukraine’s main economic partner.

Detailed data reveal a surprising picture. According to these figures, in 2017 Russia became Ukraine’s largest trading partner. The growth in trade turnover with the Russian Federation was higher than with the entire European Union (28 per cent and 25 per cent, respectively). Last year, the export of goods from Ukraine to Russia was almost higher 9.6 per cent, and the imports from Russia were as much as 39.9 per cent higher. Despite an almost 10 per cent fall in Ukrainian exports to that market, Russia is still in the first place among the countries to which Ukrainian companies export their products. In that period the import of Russian goods by Ukraine increased by 28.7 per cent and accounted for 15.2 per cent of all Ukrainian imports. Ukraine’s negative trade balance with Russia reached almost USD1.1bn.

Ukrstat data for the Q1’18 also indicate Ukraine’s growing dependence on trade with Russia. Economists point out the risks that such a situation entails. “Increasing trade with the aggressor country indicates that the current Ukrainian authorities are mainly concerned about money and that it doesn’t matter where that money comes from. It’s as if they don’t understand, that in this way Ukraine is indirectly financing the war against itself. (…) The separatist entities known as the so-called Donetsk People’s Republic and the Lugansk People’s Republic only exist thanks to financial and material support of Russia,” commented Andriy Novak, chairman of the Committee of Economists of Ukraine.

The geography of foreign trade will change even more to Ukraine’s disadvantage due to the implementation of last year’s verdict of the arbitration tribunal of the Stockholm Chamber of Commerce, which forces Ukraine to purchase Russian gas (5 billion cubic meters (bcm) per year for 2 years). This contract will also reduce the volume of trade with the EU, because for the past few years Ukraine has been making up the shortfall in gas by purchasing it from the EU countries.

Like Poland, Ukraine sees the construction of the Nord Stream 2 pipeline as problematic, although for different reasons. Ukraine fears that in the next few years the gas pipeline bypassing the country will deprive it of revenue from the export of services. That is because the largest part of Ukraine’s revenues is the fees collected from the Russian company Gazprom for the transit of natural gas through the Ukrainian network to Western Europe.

As if that were not enough, another blow to Ukrainian exporters came from overseas — in late April the American authorities, dissatisfied with the slow progress of work on the law on copyright protection, decided to exclude 155 items from the list of goods that Ukrainian companies can export to the United States duty free.

On the other hand, entrepreneurs who want to trade with the rest of the world legally are facing serious difficulties. Businesses complain about illegal checks, extortion of bribes by the customs officers, and prolonged customs clearance procedures.

The need for urgent changes is also pointed out by the European Union, which emphasized that the lack of reform in this area contradicts the obligations accepted by Ukraine in the association agreement with the EU. The government, however, is not in a hurry — a draft version of the reform that was ready and approved last year has been withdrawn. “If the reform of the State Fiscal Service [the Ukrainian customs services are a part of that structure — editor’s note] starts today, then it will take two years to carry it out,” believes Yana Bugrimova, an advisor to the Minister of Finance, who is responsible for the reform. 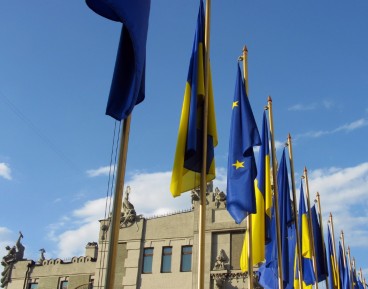