08.06.2015
Special economic zones are beneficial for regions that are at intermediate stages of development. In most cases they have not added to the growth of local communities.

There are 14 SEZs in Poland and every few years there is a battle over them between the Ministry of the Economy and the Ministry of Finance. The latter perceives CIT exemptions purely as foregone budget revenue – which up to now has totalled more than PLN 12bn. In rebuttal, the Ministry of the Economy highlights jobs and the personal income tax paid by employees in the economic zones. At the end of 2014, 2,056 companies benefited from being located in SEZ. The completed investment projects added up to PLN 101.9bn, with 213,900 new jobs having been created and a further 81,600 maintained. The year 2012 saw a new battle about whether the operation of the zones should be extended from 2020 to 2026. The battle was won by those in favour of the zones.

But a critical view is more and more common within the academic community. Many scientists say that it is worth considering if tax incentives introduced to support investors within the Special Economic Zones should stay for at least another 11 years. This does not mean that the opponents have lost all the arguments. In fact, critical opinions are proliferating.

Adam Ambroziak of the Warsaw School of Economics has analysed the impact of the zones on the development of poviats (counties). He found that rich and the poor regions didn’t derived the greatest benefits from the SEZs, in fact the benefits have been limited.

Mr Ambroziak investigated gross corporate asset growth, the increase in the number of businesses and the decrease in unemployment. He divided the poviats into 18 categories. First, he put the voivodships into three different groups: those with a GDP per capita of less than 45% of the EU average, those with 45 to 60% and those with 60 to 75%. In each of the voivodships, the poviats were also broken down into three groups by the same GDP per capita categories. Thus, the researcher distinguished 9 poviat groups, which were further split into zone- and no-zone poviats. 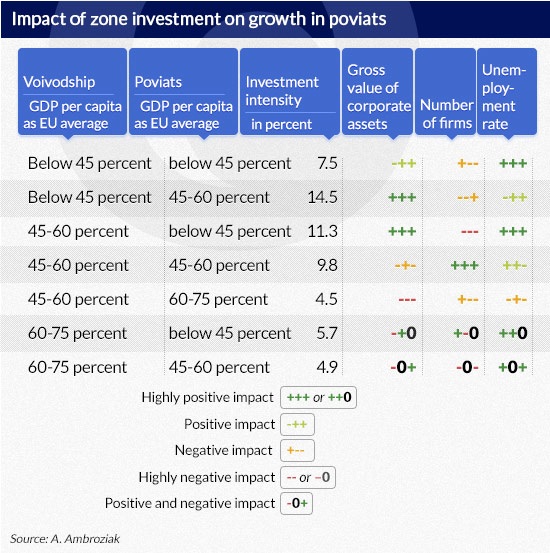 Game not worth the candle

Katarzyna Kopczewska of the Faculty of Economic Sciences at the University of Warsaw believes that SEZs have not helped to improve considerably the financial standing of local governments. Kopczewska tried to establish whether they benefited from the zones in the period 1995-2012. She found that the infrastructural investment of central and local governments totalled nearly PLN 3bn, while the tax relief was nearly PLN 10bn.

The total benefit derived from the creation of SEZs is about PLN 13.5bn, i.e. 17% of the investment made by the companies. She decided to investigate whether the benefits of the zones also spill over to the neighbouring boroughs and whether it really pays local governments to first put down the money for the infrastructure investment, guarantee the tax breaks, and in the future secure higher tax revenue from CIT and PIT.

Kopczewska’s survey finds that the zones have not added to growth. In most cases boroughs in which the zones were created were mid-income ones (not the lowest-income). A few years on, their level of economic development remained unchanged. Those boroughs that were included in the economic zones at the end of the researched period did better on average than other boroughs, and had experienced unhampered growth. Moreover, in the long run the zones do not produce a significant improvement to the economic situation of the boroughs. Katarzyna Kopczewska believes that the boroughs gain more by investing in infrastructure – which attracts more investors – than by depriving themselves of tax revenue in the SEZ.

It is worth mentioning that the majority of CIT proceeds ends up as revenues of the State Budget. The boroughs receive 6.71% of the CIT revenue, and poviats even less – 1.4%. In contrast to this, 39.34% of the PIT income is allocated to the boroughs, and 10.25% – to the poviats. The boroughs can exempt investors from real estate tax, which they often do – if only for a fixed period – although it is not a rule. So the researcher’s objections cannot be accepted without reservation.

In turn, Andrzej Cieślik from the Faculty of Macroeconomics and Theory of Foreign Trade at the Department of Economic Sciences at the University of Warsaw has shown that Special Economic Zones were not created where they were most needed but in places from which – at the time of their creation in 1995-97 – most politicians of the then ruling party, the Democratic Left Alliance (SLD), originated.

This was not necessarily in line with the requirements of the EU or the WTO, which Poland joined a few months before opening the first zone. The World Trade Organisation allows the creation of economic zones in underdeveloped regions. According to regulations, such regions must meet at least one of two criteria: GDP per capita not exceeding 85% of the country’s average and/or an unemployment rate of at least 110% of the national average. Andrzej Cieślik calculated that none of the former voivodships – the Katowice, Rzeszów, Gdańsk, Cracow and Warsaw voivodships – met either of the two criteria for SEZ establishment. 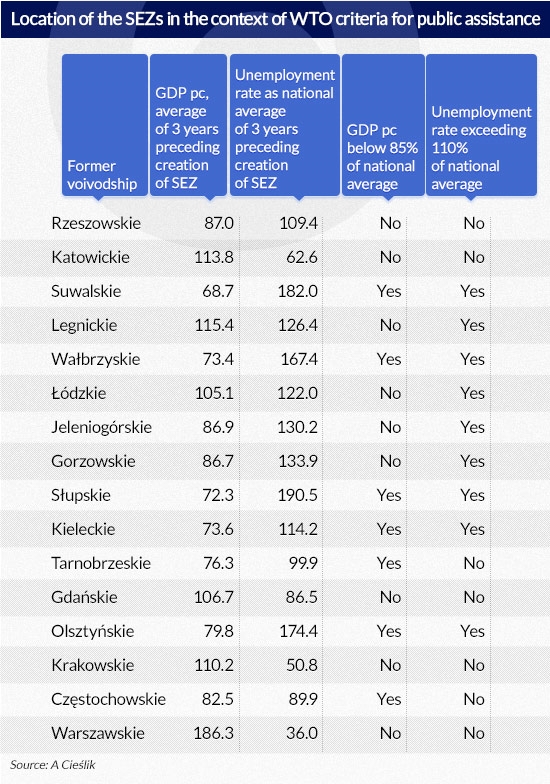 After a thorough research it turned out that political representation was an important criterion of zone’s location in Poland. Although the zones were indeed set up in areas with high unemployment, there were ones which had already recorded robust employment growth before the advent of the zones. GDP per capita was not a statistically significant factor. SEZs were the instrument of economic restructuring in high unemployment regions early in the transition period of Poland. However, according to the author they failed to turn into a more permanent regional policy feature geared to securing long-term growth of the economically weaker regions.

Radosław Pastusiak of the Socioeconomic Faculty of the Łódź University believes that not all the countries who introduced the SEZs benefited from them. For some, the consequences were downright negative. He calculated the value of net profit for the zones in 2013 – by adding the annual wage bill, exports, imports, CIT, domestic sales to the zones, public assistance, and infrastructural and administrative expenditures. This rendered a positive amount of PLN 116.5 million.

This view is opposed by Paweł Tynel, an EY expert. In his opinion, Poland cannot afford not to have the zones, since all competitor countries provide tax incentives to investors. In the Czech Republic, for example, there is no „coverage” by an economic zone – any investment beyond a certain threshold enjoys tax exemption. Cezary Tkaczyk, the President of the Management Board of the Special Economic Zone „Starachowice”, said that thanks to the establishment of the zone, unemployment in the town had fallen from 28.6% to 14.9%.

Today, the zones are trying to find their feet in the new reality, where none of them – apart from those situated in East Poland – can offer investors conditions on a par with previous incentives, especially in terms of public assistance. So the zones have engaged in cooperation with businesses and schools to fight for the restoration of vocational education. They are also preparing vast developments along existing highways, and the ones still under construction.

They are also working on the development of clusters. Zones are no longer mere organisations conferring tax exemptions on firms, but act as business partners assisting entrepreneurs from the outset of an investment project and looking after them when the plant is already up and running. Despite all the doubt, they are a truly proven support instrument; one of the few that are still left for large companies.

Contrary to popular belief, the zones are not the realm of foreign corporations. At the end of 2013, Polish capital accounted for the largest share of the investment in the zones (19.9%).  Some investors imagine that the barrier to entry to an economic zone is too high. Yet an investment of as little as EUR 100,000 can be granted tax exemptions. So perhaps the proposals that the operation of SEZs be extended indefinitely, with permits granted only for a period of 10-15 years, are reasonable? In the meantime, academics’ reservations could be considered in plans of making the zones even more effective.

The findings of the studies cited above were presented at a conference organised by the Center for Social and Economic Analysis (CASE), which was to address the question whether Poland can afford not to have Special Economic Zones.