21.09.2018
The history of the port of Gdynia is a story of two Polish engineers, Tadeusz Wenda and Eugeniusz Kwiatkowski. The former supervised the works, while the latter mastered the art of financing this ambitious project. 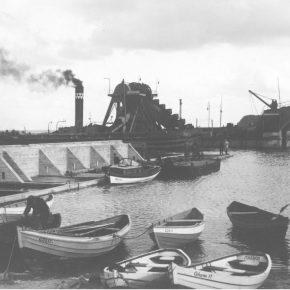 The construction of the new port in Gdynia, 1935 (Narodowe Archiwum Cyfrowe, Public domain)

The history of the Gdynia port is longer than that of the city itself. The construction of the port began in 1921 (under the name of the Temporary Military Port and Fishermen’s Shelter). It was not until five years later that Gdynia was actually granted municipal rights. Regrettably, the construction of the port received much less attention in Polish literature than the construction of the city of Gdynia. One of the experts on this subject, Kazimierz Iwaszko, wrote that from the very beginning the Gdynia port was a living showcase of both the economic potential and the technological achievements of Poland at the Interwar Period (1918-1939).

Born in Warsaw in 1863, Wenda was a perfect candidate to become the port’s chief designer and construction manager. His advantages included not only his vast knowledge (gained during studies in Warsaw and then at the Institute of the Corps of Communication Engineers in St. Petersburg, Russia) but also his broad experience. He acquired it by directing the construction of the ports in Ventspils, Estonia and also in Roja, Latvia. The fact that Wenda was involved in the construction of railways was also important.

In accordance with the Treaty of Versailles, in 1920 Poland received 140 kilometers of coastline, and a solemn ceremony of the country’s “wedding to the Baltic Sea” was even held. It soon turned out, however, that the use of the port of the Free City of Gdańsk, which was guaranteed by the Treaty, was in fact associated with many difficulties. These complications proved to be particularly onerous during the unloading of weapons for the Polish Army fighting the war against Bolshevik Russia in 1920.

As a result, less than a year after the victory over Bolshevik Russia (the so-called Miracle on the Vistula River), on May 12th, 1921, a draft law was submitted to the Polish Parliament, calling on the Polish government to build Poland’s own port. Gdynia was no obvious choice at all. Different sources mention various potential locations: Puck, Rewa or even Hel.

It was Tadeusz Wenda who chose Gdynia. As Kazimierz Iwaszko wrote in his study, Wenda did not have the slightest doubt: the lowland situated between Gdynia and Oksywie, some 16 kilometers from New Port in Gdańsk, was a perfect location.

Works in Gdynia started in 1921, but strong support from the Polish state only came in the autumn 1922, when the lower house of parliament, Sejm, passed the law obliging the government to build the port. Gdynia received its first ship, the French SS „Kentucky”, on August 13th, 1923, when construction works were still in progress.

The new port had to be connected with the rest of the country, and Tadeusz Wenda’s experience proved invaluable. The launch of a new rail line was necessary for two reasons: in order to connect the new port with the region of Silesia (export of coal) and in order to bypass the Free City of Gdańsk.

However, the Second Polish Republic was quickly forced to face the brutal economic reality. At that time, Poland was a very poor country. In 1924, Poland was hit by an economic crisis, and inflation was raging. The works in Gdynia were suspended due to a shortage of funds. This is when engineer Eugeniusz Kwiatkowski entered the stage with his innovative concepts.

Kwiatkowski was putting great emphasis on the importance of domestic capital. He set his sights on the Association of Upper Silesian Coal Mines “Robur” as one of the first investors. That company was a tough market player led by Alfred Falter. However, Kwiatkowski was able to convince him to pay for the expansion of the port by offering him tax breaks.

This scheme was subsequently duplicated in cooperation with other companies who were also willing to provide the necessary capital. In addition to Robur, the construction of Gdynia was financed, among others, by the Polish Treasure Mines in Upper Silesia “Skarboferm”. The cranes necessary for the port’s operation were supplied to Gdynia by the “Zgoda” Ironworks from Świętochłowice.

However, the construction of the port required such large amounts of money that it was not possible to obtain them using tax breaks alone.

The scale of the expenditures was so great that it was necessary to quickly find new sources of financing. Kwiatkowski came up with another innovative idea — he launched auctions for the quay operation rights. The rights for the operation of the Danish quay were sold a few years before it was even built. In exchange for the lease of the yards on the port pier in Gdynia, the companies were obliged to install the transshipment equipment. According to Andrzej Romanowski, who devoted several books to Eugeniusz Kwiatkowski’s work, the financing for the construction of a rice mill and warehouses was provided, among others, by companies, such as: Łuszczarnia i Młyny Krakowskie, Olejarnia Gdańska or Cukroport.

In order to be able to maximize the benefits, it was necessary to equip the city itself with commercial fleet, without which it would be difficult for the port to fulfil its purpose. Kwiatkowski was working with great vigor. As a result, in January 1927 new ships built in France came to Gdynia. The first of them was SS “Wilno” (in 1949 renamed “Wieluń”), which was then joined by subsequent ships named “Poznań”, “Katowice”, “Toruń” and “Kraków”.

Once again, Kwiatkowski’s entrepreneurial spirit did not fail him. In 1927, he signed an agreement with the aforementioned Alfred Falter, which led to the creation of the Polish-Swedish Transport Society “Polskarob”. That company became an owner of seven state-of-the-art Robur ships, which facilitated the transport of coal. The transshipment volumes at the Gdynia port increased from 10,000 tons in 1924, to 2.8 million tons in 1929. By 1938, they had tripled to 9.2 million tons. The exports mainly included coal and coke (85 per cent). Meanwhile, the imports were more diverse (raw materials and metals, cotton, food).

This was not the end of the port’s development. In 1928, the Polish-British Ship Society “Polbryt” was established, primarily in order to service the intensified migratory movements. In turn, in 1930 the Polish Shipping Company “Żegluga Polska” established the Polish Transatlantic Ship Society, which in 1933 transformed into the famous Gdynia America Line “GAL”. Until September 1939, that company came into the possession of eight ships, including two transatlantic ships MS “Piłsudski” and MS “Batory”, which for over 30 years served as Poland’s most recognizable ambassador on the seas and oceans and in hundreds of the world’s ports. According to Wikipedia, the London branch of the GAL company exists to this day.

Eugeniusz Kwiatkowski, who was persecuted in the early days of the Polish People’s Republic, is mentioned today as one of the most important Poles of the 20th century. The main engineer of the Gdynia port Tadeusz Wenda was much less lucky. Despite Kwiatkowski’s continued insistence that the port would not exist without Wenda, almost all of the subsequent Polish decision-makers were extremely restrained in properly appreciating that outstanding man. After all, it was precisely the construction of Poland’s own port that allowed the young Polish state — in its new borders — a true wedding to the Baltic Sea. 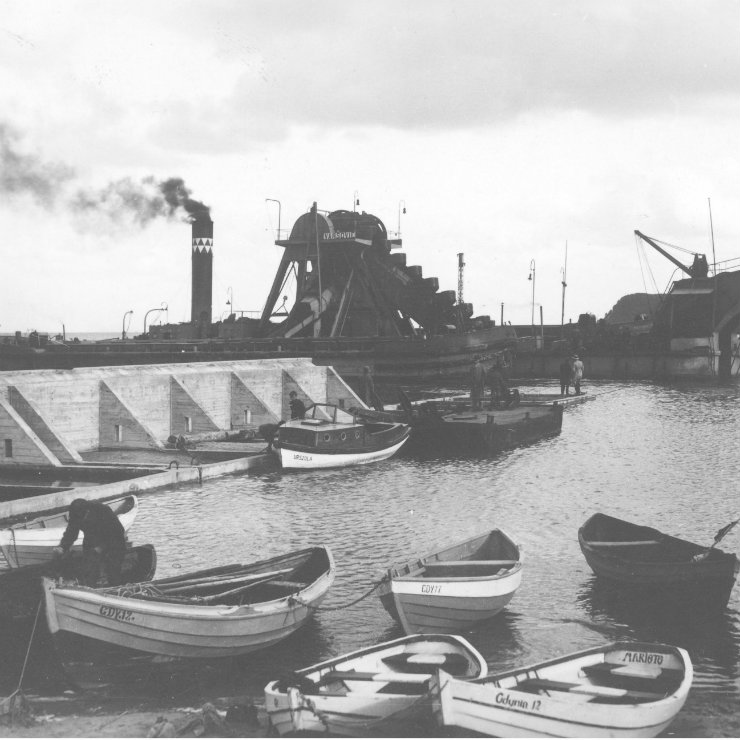 The construction of the new port in Gdynia, 1935 (Narodowe Archiwum Cyfrowe, Public domain)