The ECB has to look at the Eurozone as a whole

22.03.2019
“If we were to only take into account the wishes of selected members of the Eurozone, we could act faster, but that is impossible,” says Ewald Nowotny, the Governor of the Austria’s central bank, OeNB. 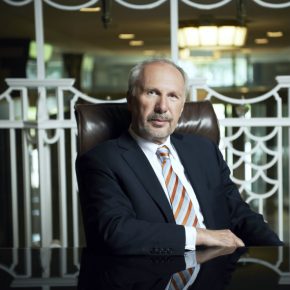 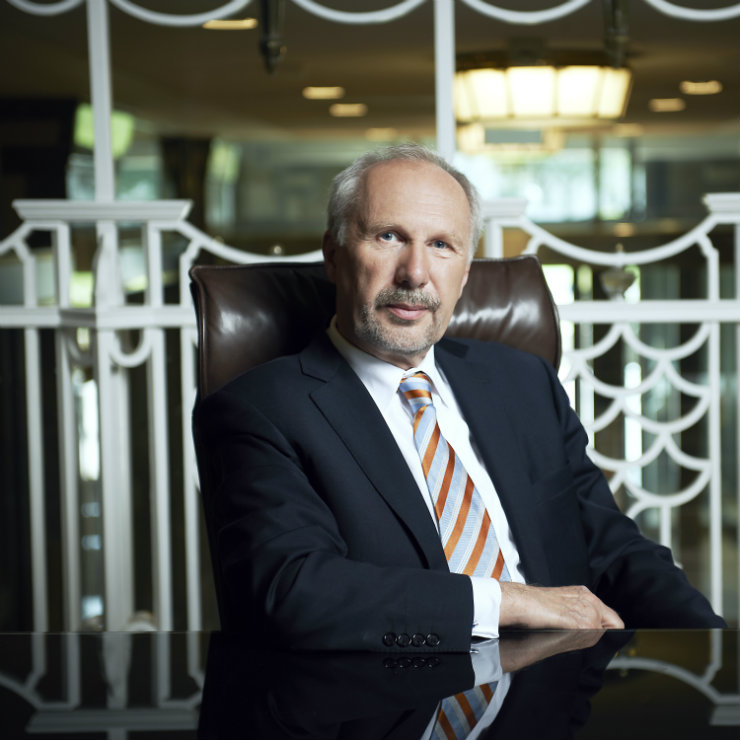 CE Financial Observer: How does the operation of a central bank look in practice after accession to the European monetary union? Has its importance decreased?

Ewald Nowotny: This is a complex issue. The central banks of the individual member states of the Eurozone are in reality the owners of the European Central Bank. The governors of these banks jointly participate in the deliberations of the ECB’s governing council and have an equal vote. For Austria this means that we in fact have a bigger impact on monetary policy than in the days when we had our own currency.

It’s simple. We are a small country, so in practice our theoretically sovereign monetary policy basically boiled down to following the policy set by the central banks of the major economies, and in particular the German Bundesbank. Today, as I’ve said, we are a part of the decision-making process at the European level, and not just in relation to monetary policy. There is a whole list of other areas that we can influence. We participate in the development of the joint financial supervision in the euro area, the banking union, and the stabilization mechanism. Incidentally, these are all open institutions and Poland could also participate in them, even though it hasn’t adopted the euro yet. Joining a bigger financial organism is beneficial because it integrates and strengthens the banking system. The Swedish bank Nordea has recently moved to Finland precisely because it wanted to have a European rather than a national regulator.

Let’s stay on the topic of monetary policy. One of the problems of the Eurozone is that the ECB, out of necessity, sets uniform interest rates for economies which are in different phases of the economic cycle. Let’s suppose that Germany needs higher interest rates and Austria needs lower rates. Will the voice of Austria, which is a much smaller economy, be heard at all?

It will be heard, but it will not matter much, because the ECB has to look at the economic situation of the Eurozone as a whole — just like NBP has to look at Poland as a whole, and not at its southern part or its central part. The argument that you’ve raised is correct in theory, but in practice the economic situation in Europe is not as divergent between the individual countries. When there is a crisis, it occurs almost everywhere, and the situation is similar in the case of a boom. Of course, there are exceptional situations, as we are now seeing with the heavily indebted and unstable Italy, but this uniqueness results from its national fiscal policy, and not from the European monetary policy. When you are a member of a monetary union, you have to maintain budgetary discipline. This is the price you have to pay for access to a larger market and the chance to obtain a more important role in the global economy. When you break this discipline, you’re in trouble. Let’s just say that there are some “problem children” in the EUR family, but you can grow out of problems, and I’m optimistic in this regard. The more issues that are discussed at the European level, the greater the chance that the fiscal problems will be reduced.

So is Austria happy with the EUR?

For Austria, as a small country, it was the obvious decision to adopt the EUR upon the introduction of that currency. This is especially the case because we know from experience what it means to be in isolation, and for us to remain outside the euro would in a certain sense mean isolation. Of course, Poland is a much larger country, but is it really so large that joining the euro wouldn’t provide it with tangible benefits?

Theoretically, each EU member state should ultimately join the monetary union. In Poland the prevailing belief is that it’s better to wait until the situation in the Eurozone stabilizes. How long will we have to wait for this stabilization?

Indeed, there was a period of time when the long-term stability of the euro was questioned. But that is now a thing of the past. Today the markets are absolutely convinced that the euro is holding up well. The European Union is first and foremost a common market, and it is impossible to have a common market to the full extent if there is no common currency. It is extremely important for all European countries where export is an important element of growth. Therefore the question concerning the euro is not just a question about the currency, but about whether we want to be a part of a single market or not? And — looking more broadly — do we want to develop at full speed, or do we want to pursue a slower growth path.

It’s just that the countries of the Eurozone are in fact on this slower path, at least when it comes to the GDP growth rate.

The Eurozone countries are developing at different rates. But even if they’re growing slowly, or hardly growing at all, like Italy, these are still huge, important markets, and presence on these markets means bigger revenues for companies.

Many economists emphasize that the long-term stability of the EUR depends on whether it will be possible to build a fiscal union in Europe. Do you agree with that?

Again — from the point of view of pure theory — I would fully agree. The need to create a strong central fiscal union certainly exists. At the same time, the point is not to transfer the entire fiscal policy from the national to the European level. It’s only about some of its elements. But when should we do that and how? The answer to this question is more complicated. Let’s look at the history of monetary unions — they developed in an evolutionary rather than revolutionary manner. Slowly. Why is that? Let’s keep in mind that a fiscal union means fiscal transfers from one country to another, and the wealthier countries are naturally opposed to such transfers. It is necessary to work out their scope. They cannot be too big, because then no one will agree to them. They also cannot be too small, because then they will not have the desired effect. In the United States they worked out such a system, but how long did it take? It took them 100 years before a central bank was established there!

And there was also a civil war along the way.

Unfortunately, you’re right. In Europe, the process of building a monetary union is progressing in a manner that is faster and more peaceful. Look at it this way — the EUR has only existed for 20 years, and we have already been able to create, for example, common banking supervision and stabilization mechanisms. Even a decade ago, nobody would have thought that we would succeed in this field. It simply takes time. We shouldn’t hurry. Changes in the financial system must be carried out with political support and not against political opposition.

I’m glad that you’ve mentioned the United States and the Fed. Americans are afraid of inflation and they’ve already started raising the interest rates. This hasn’t been the case in Europe. The interest rates are still kept at zero. Why is that?

The United States and the Eurozone are at different stages of the economic cycle. In the United States the economy recovered after the crisis much faster than in Europe, also because they pursued a much bolder fiscal policy. Even if it was to result in a higher level of deficit and debt, the Fed could and should have acted faster. And that’s what it did. The ECB doesn’t differ from the Fed in terms of strategy and follows the same path. What is different is the pace. In December 2018, we ended quantitative easing. This year we will probably start slowly and consistently raising interest rates, and eventually we will stop reinvesting the proceeds from bonds, which will reduce the value of the ECB’s balance sheet. In the United States, this third step was already taken a year ago.

Inflation in the Eurozone oscillates around 2 per cent, when just two years ago it was barely above zero. Is this not a signal that we need to act faster?

The difficulty with finding the right moment to change interest rates is a problem faced by every central bank. Perhaps, if we were to only take into account the wishes of selected members of the euro area, we could act faster, but that is impossible. This is also true in the United States, where the interest rate set by the Fed has a different effect on Texas than on California. Some averaging is necessary and such a policy works.

Does monetary policy works? I have to admit that this is a rather controversial thesis. After all, the 2008 crisis has shown that standard monetary policy no longer provides the adequate tools to deal with an economic downturn. Hence, for example, the need to introduce “quantitative easing”, which is a completely experimental tool.

I’m not saying that monetary policy is not subject to change and improvement. On the contrary — it should keep up with the development of the theory and evolve accordingly. And that is happening. For example, in the past the principle of central banks’ operation was primarily to regulate the money supply in accordance with the previously adopted objectives. No one does that anymore and today monetary policy is being conducted on the basis of inflation targets. This is a good approach, because it really stabilizes the economy.

What have the central banks learned from the last crisis, if anything at all?

Flexibility. Let’s take this policy of inflation targets. These are not rigid targets. No one assumes that if we set the inflation target at 2 per cent then we will manage to fully achieve it. This is due to the fact that the central bank does not govern the economy, and that it is largely unpredictable. It is therefore assumed that in the medium term the inflation rate should be around 2 per cent, with a possible deviation of a percentage point. Among the central bankers, a mechanistic approach to money, in which everything can be predicted, is a thing of the past.

Paul Tucker, a former board member of the Bank of England, has published a book entitled “Unelected Power”. According to him central banks, which have become the most powerful financial institutions in the world, should become more transparent and democratic. Has there been any progress in this area in the case of the ECB?

I agree that the independence of central banks is one thing, but it is equally important to trust them. Without it, they will not be effective. I think that the ECB is changing for the better. In the past, the reports from the ECB’s meetings were published after several years, and now they are released after three months. This is just one example, but there are more changes. You asked about the role of the national central banks after the accession to the Eurozone — one very important element of their operation is the financial education of the citizens, which allows them to understand the twists and turns of monetary policy. By the way, NBP is doing quite well in this regard.