The new EU budget: more funding, although difficult to obtain 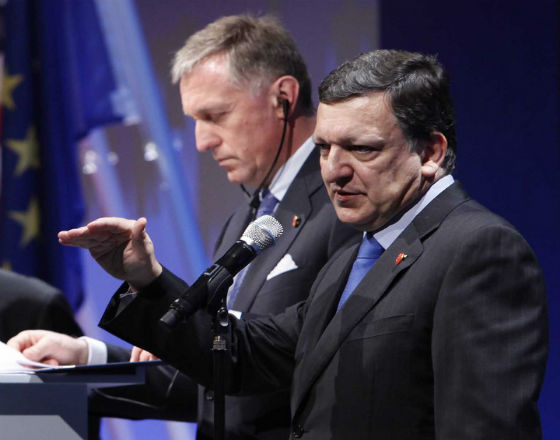 As compared to the current EU budget, Poland is to receive EUR 5 billion more in the budget for 2014-2020, but the funds will be more difficult to use. Local governments will benefit most from it if only they manage to master the new keywords.

‪The European Parliament will deal with a resolution specifying the Multiannual Financial Framework 2014 – 2020 in a few days, but a formal vote will probably not take place until September. The budget will have to be approved by the Member States. However, José Manuel Barroso’s declaration of 27 June, according to which a political agreement at the highest level had already been adopted, leads to believe that the end of this process is approaching and that it is now time tos think about the most reasonable way in which to spend the EU money.

– It will no longer be possible to finance simple projects that bring a visual, rather than economic effect; only projects driving the development of the entire area will benefit from funding – regularly reminds Minister of Regional Development Elżbieta Bieńkowska.

Indeed, although Poland will have about EUR 72.9 billion to spend (as compared to EUR 67.9 billion in the on-going financial perspective), freedom to dispose of such funds will be limited.

The EUR 72.9 billion are not all the money that Poland is to receive from the European Union in the period between 2014 and 2020 – the total amount is to approach EUR 106 billion. EUR 28.6 billion will be spent on payments to farmers and contribute to rural development projects; a maximum of EUR 72.9 billion can be spent on Cohesion Policy, which has been the most controversial issue. Money from this fund is used to finance the construction of roads and sewage treatment plants, as well as professional development programmes and support programmes for entrepreneurs.

EUR 72.9 billion is the equivalent of PLN 303.6 billion (the budget negotiated in EUR at constant prices of 2011; the amount in PLN is converted at the rate of 8 February 2013). This sum was displayed on a screen in Brussels when Prime Minister Donald Tusk was cutting a cake symbolizing this huge amount of money. 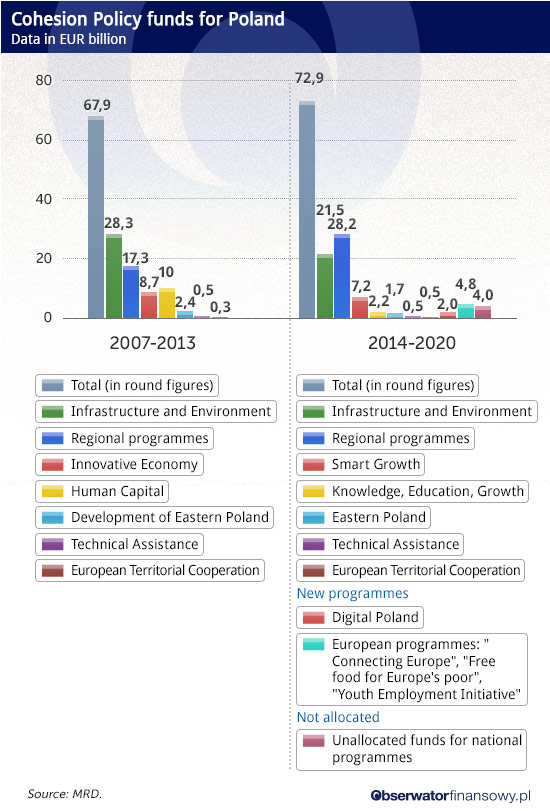 This is naturally the maximum of what we are required to get from the multiannual EU budget. The exact portion of the pie that we will get depends on us: to benefit from it, we must be well prepared in terms of having our own contribution and drafting reasonable applications. This may prove a major problem.

The Ministry of Regional Development (MRD) has already presented the first proposal for the allocation of funds in the new financial perspective. At the first glance, the new structure of the programmes is similar to the previous one, although with a few exceptions: the Human Capital will be replaced by Knowledge, Education and Growth, and the Innovative Economy with Smart Growth and Digital Poland – a new programme.

Regions are to benefit most from the new financial framework: they will have as much as EUR 28.2 billion to spend, as compared to EUR 17.3 billion in the current perspective. The devil is in the details and, in this case, the most important seem to be the conditions under which resources could be obtained.

It has so far been recommended that the EU money be earmarked for purposes related to the implementation of the Lisbon Strategy, which was comprehensive enough to include all the activities of local governments. The new financial perspective is to be in line with the Europe 2020 strategy, which is far more precise. The European Union focuses on innovation and low-carbon economy and, for the first time, this will be reflected in the legal package for the multiannual financial framework. The content of this document should be made public by the end of 2013.

In practice, it means that special funds from regional programmes, which have so far been used for the construction of roads, sidewalks, sewage treatment plants and water parks, will need to be allocated differently. At least half of the money must be spent on regional specialization. Instead of conducting operations in all 11 areas of local government activity, a maximum of five tasks will be selected.

Innovativeness, low-carbon economy and ICT are the new keywords to be quickly mastered by local governments.

– Assistance for research and development activities, as well as the implementation of their results in business will be of particular importance. Through the co-funding of joint projects carried out by business and science consortia, we wish to promote the innovativeness of enterprises. The idea is that instead of using the existing technology, they develop new solutions in areas of smart specialization; they are to be identified through a dialogue with entrepreneurs and with the use of existing scientific potential – says Stanisław Krakowski from the Ministry of Regional Development.

Nevertheless, local government officials complain that not every Polish community has the necessary scientific potential, as well as professionals who are capable of implementing new solutions.

– We expect that Poland will receive a lot more than it wants for the development of human capital, at the expense of infrastructure projects. However, we would like more money for infrastructure development – says Marek Wójcik from the Association of Polish Poviats.

Local government officials are not content that the European money will no longer be used to build local roads. This is the consequence of the decision made by the Polish government: the funds from the new perspective will be spent on completing the construction of motorways and express roads. Therefore, a determined commune head who wants to build a new road will have to account for it in a different manner. A local road can be financed if it is part of a larger project, such as the revitalization of an area, or of a major transportation route.

However, the greatest concern of commune heads, town and city mayors is to find the money to finance own contribution to EU-financed projects, given the introduction of individual and stringent debt limits for each unit of local government as of 1 January 2014.

– The macroeconomic situation and the State policy regarding local governments’ budget deficit is likely to deter local communities from any bold initiatives. It will not be as easy to achieve a high level of the use of the funding available in the new financial perspective – warns Jerzy Kwieciński, the former Deputy Minister of Regional Development.

– Municipalities will need to pay greater attention to their spending and debt levels, bearing in mind that the implementation of EU projects necessitates their own contribution – admits Stanislaw Krakowski from the MRD, adding that the 85-percent rate of EU financing, as well as the eligibility of VAT, has been maintained for implemented projects.

Thanks to this decision, local governments’ spending on own contributions will be lower.

The new perspective can also be perceived as an opportunity: village streets will no longer be paved with expensive concrete sett and there will be no ribbon cutting ceremonies for the opening roads that are of limited use and expensive to maintain. Local governments will need to look for more ambitious projects.

– It is a happy coincidence that in the framework of Europe 2020 strategy we will spend more money on research and development, innovation and low-carbon economy, just at the time when Poland is faced with the danger of falling into the middle income trap – says Jerzy Kwieciński.

He adds that if the conditions of the present perspective had been maintained, Poland could share the fate of Spain or Portugal – countries that suffered from overinvestment in infrastructure.