The single market is difficult for services

The principles of the single market of the European Union include the free movement of goods, capital and people. But the biggest challenges are faced in the case of the freedom of cross-border provision of services.

The free movement of goods seems to be the most obvious thing. However, the definition of goods seems to be a problem. This term can be understood as physical things, or it can be interpreted more broadly as all traded values, including services. The latter represent more than two-thirds of the GDP of the European Union and make up 90 per cent of the jobs in the economy. But in cross-border trade within the EU they account only for a little more than a fifth of the turnover.

The low participation of services in the international turnover largely stems from their specific nature. It is estimated that only 25 to 33 per cent of services can be transferred to other countries. Most of them are local in nature which applies in particular to public services. The development of technology, including the internet, broadens the range of services that can be transferred across borders.

Economists point out that in the services market there is a greater information asymmetry between the producer and the consumer than in the market of physical goods. Services are also more difficult to standardize and because of that trust in the company offering the services is more important. As a result, it is more difficult for a foreign service provider to compete with local firms which have already won the trust of clients.

The productivity of services grows slowly, which to a large extent results from the low intensity of competition limited by the persisting barriers. Services have the largest share in the trade turnover in Luxembourg (79 per cent of exports), Cyprus (75 per cent) and Malta (72 per cent). Germany, which is the largest exporter in the European Union, has a negative balance in the trade in services within the European Union. Poland’s services account for 16.5 per cent of exports which ranks the country below the EU average.

Free competition could drive down the prices of services, encourage innovation and accelerate the response of service providers to the changing needs of consumers. 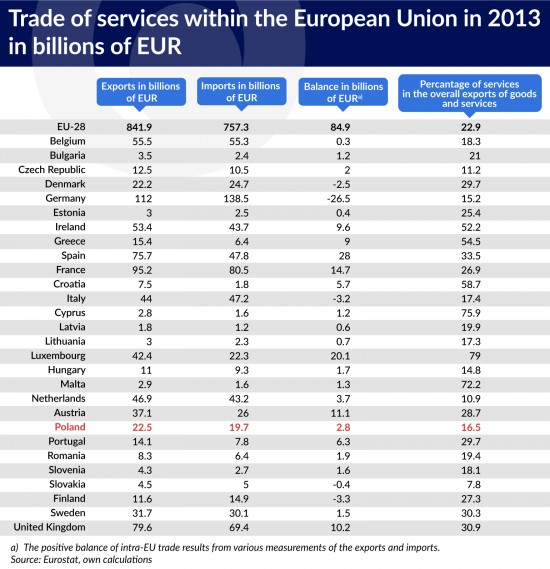 In January 2004, Frederik Bolkestein, a Dutch politician who served as the European Commissioner for Internal Market and Services in the years 1999-2004, proposed the adoption of a directive on services in the internal market providing for the complete elimination of barriers in this area. According to the calculations of the consulting firm Copenhagen Economics, an improvement of competitiveness in the services market would lead to the creation of 600,000 jobs in the European Union and an increase in consumption by EUR37bn.

Bolkestein’s initiative was met with opposition from France, and to a lesser degree also from Germany and Belgium. Philippe de Villiers, a French politician running for president, coined the term “plombier polonais”, which means “a Polish plumber”, posing a threat to French professionals. The French President Jacques Chirac described Bolkestein’s proposals as “unacceptable”.

Western politicians were afraid of “social dumping”, that is, competition from lower-paid workers from Central and Eastern Europe. They would be subject to the provisions of the labor laws of their country of origin, which are usually less demanding for the employers. Trade unions from the Western Europe argued that the competition of workers who are cheaper and have fewer social benefits would lead to an erosion of the system of social benefits in their countries. The opponents of the Bolkestein directive pointed out that it is in contradiction with the Directive of December 1996 concerning the posting of workers in the framework of the provision of services.

Some of the Polish trade union organizations, including “Solidarity”, also expressed their opposition to the Bolkestein directive. Polish trade unions demanded that foreign workers receive the same remuneration for work performed abroad as the local workers. On the other hand, the Bolkestein initiative was supported by the United Kingdom, Spain and the Netherlands, and the majority of the new EU countries.

A compromise version of the Directive was ultimately adopted in December 2006 and came into force in December 2009. All member states were required to create web portals through which any service provider can learn about the legal requirements they have to meet in order to operate in a given country.

Referring to Article 49 of the Treaty on the Functioning of the European Union, the Directive states that “the elimination of barriers to the development of service activities between Member States is essential in order to strengthen the integration of the peoples of Europe”. In accordance with the Directive, service providers could:

They were free to choose between these two freedoms.

The Directive of 1996 provides that an employee posted to work in another country shall be subject to the laws of that country, which includes, among others, the minimum wage, the maximum working hours, the occupational health and safety provisions, the minimum duration of the annual leave, and the conditions of accommodation. The Directive therefore imposes strong restrictions on companies providing services outside their own country. The number of posted workers in the EU is growing rapidly and currently amounts to approx. 2 million.

In March 2016, the European Commission adopted a draft amendment of the Posting of Workers Directive. It includes, among others, a proposal of equalization of remuneration of posted workers with the remuneration of local workers in a given profession. Fourteen EU member states protested against such a solution, but 4 countries with the highest earnings stated that the draft complies with the EU principles.

The Directive on the Posting of Workers is harmful to the Polish haulage industry. Germany, France and Norway demand that drivers from other countries (Poland is the leader in the European road haulage industry) be paid at least the minimum wage of the countries in which they provide the services. They also demand that Polish transport companies meet the social conditions in accordance with the laws of the host countries. These include the working time and the conditions of accommodation, among others.

Meeting these demands would lead to the loss of competitiveness of Polish haulers. The problem is associated with, among others, the method of calculation of remuneration. In accordance with the Polish law, a truck driver should receive, in addition to the basic salary, a reimbursement of travel expenses (the so-called “mileage allowance”). As a result, the actual earnings of truck drivers are several times higher than their basic salary entered into the employment contract and usually higher than the minimum wage in Germany and France. But the authorities in Germany and France only check the employment contract containing the low amount of the basic salary and on this basis determine that it violates the local regulations. Poland has intervened in the European Commission and has threatened to file a lawsuit to the European Court of Justice. The European Commission intends to propose a solution clearly defining the status of truck drivers next year. If solutions unfavorable to Polish transport companies are adopted, it will affect not only the industry, but also the whole of Polish exports to the EU.

The Services Directive was supposed to remove barriers for competition in the services sector, but its implementation has proven to be difficult, because there are strong interest groups in the EU member states that seek to impose controls on the prices of services (setting minimum prices) and limitations on the service providers’ ability to enter the market of another country.

The Directive itself limits the scope of services that should be subjected to free cross-border trade. It contains the following passage: “The provisions of this Directive … should apply only to the extent that the activities in question are open to competition, so that they do not oblige Member States either to liberalize services of general economic interest or to privatize public entities which provide such services or to abolish existing monopolies for other activities or certain distribution services.”

This provision gives the governments considerable freedom to maintain the previously existing restrictions, if they consider that to be necessary for the protection of the “public interest”.

Moreover, the Directive lists a number of areas which are not covered by the liberation of trade in services within the European Union. These areas include:

The freedom to provide services throughout the EU is linked with the recognition of professional qualifications by EU Member States. According to a survey from 2015, some 21 percent of European employees work in regulated professions. These figures are the lowest in Sweden and Denmark (15 percent), and the highest in Germany (33 percent). Directive 2005/36/EC of September 7th, 2005, on the recognition of professional qualifications, allows workers from seven professions to work in all the EU Member States, provided that they meet the harmonized EU-wide requirements. These professions include: doctors, nurses, dentists, veterinary surgeons, midwives, pharmacists and architects. Qualifications in many regulated professions in the field of crafts, trade and industry are recognized based on the professional experience of the person concerned. The Directive was amended in 2013. The new provisions include the announcement of the introduction of a European professional card for various regulated professions. The holder of such a card would have the right to practice their profession throughout the European Union.

How much can we gain?

In recent years, EU member states have carried out a number of changes in their legislation liberalizing services markets. According to conservative estimates, this will increase the GDP of the EU by 0.8 percent over 10 years. If the member states liberalized the services market at a faster pace, it would be possible to obtain an additional increase of 1.8 percent. The liberalization of the market of postal services alone would provide an additional value of EUR11bn per year, and the liberalization of the whole market to the level found in the United States would provide an additional value of EUR39bn per year.

According to the assessment of the European Commission, only some of the Member States carried out reforms of the services market – in particular the countries of Central and Eastern Europe, which benefit from EU funds. The report of the European Parliament of April 2016 entitled “Reducing Costs and Barriers for Businesses in the Single Market” indicates that many services sectors in the EU are still over-regulated, which limits competition.

This applies in particular to digital services, retail trade and professional services. In many countries foreign companies providing services are required to have an additional insurance policy, even though they already had one in their own country. Contrary to the Directive on the recognition of professional qualifications, some countries require local certificates and licenses for the provision of certain services. In EU Member States there are 368 regulations concerning services and thousands relating to regulated professions. Professional services are the least regulated in the United Kingdom, Ireland and Finland. The regulations in these countries are less stringent than in the USA. The highest level of regulation is found in Italy, Luxembourg, Slovenia and Germany.

The OECD presented a critical assessment of the European services market in the “Economic Surveys: European Union” study from April 2014. According to the study, EU Member States are not making progress in the deregulation of services, and some countries are even regressing, in spite of the Services Directive.