11.01.2014
Rarely do new ideas appear among concepts of how to return to speedy growth following economic crisis. Ideas that have already been tested garner the most references. A renewed hope is found in the notion that if the economy can’t fix itself, then the state should do so. And from there it is only a small step to a full return of the state to business. 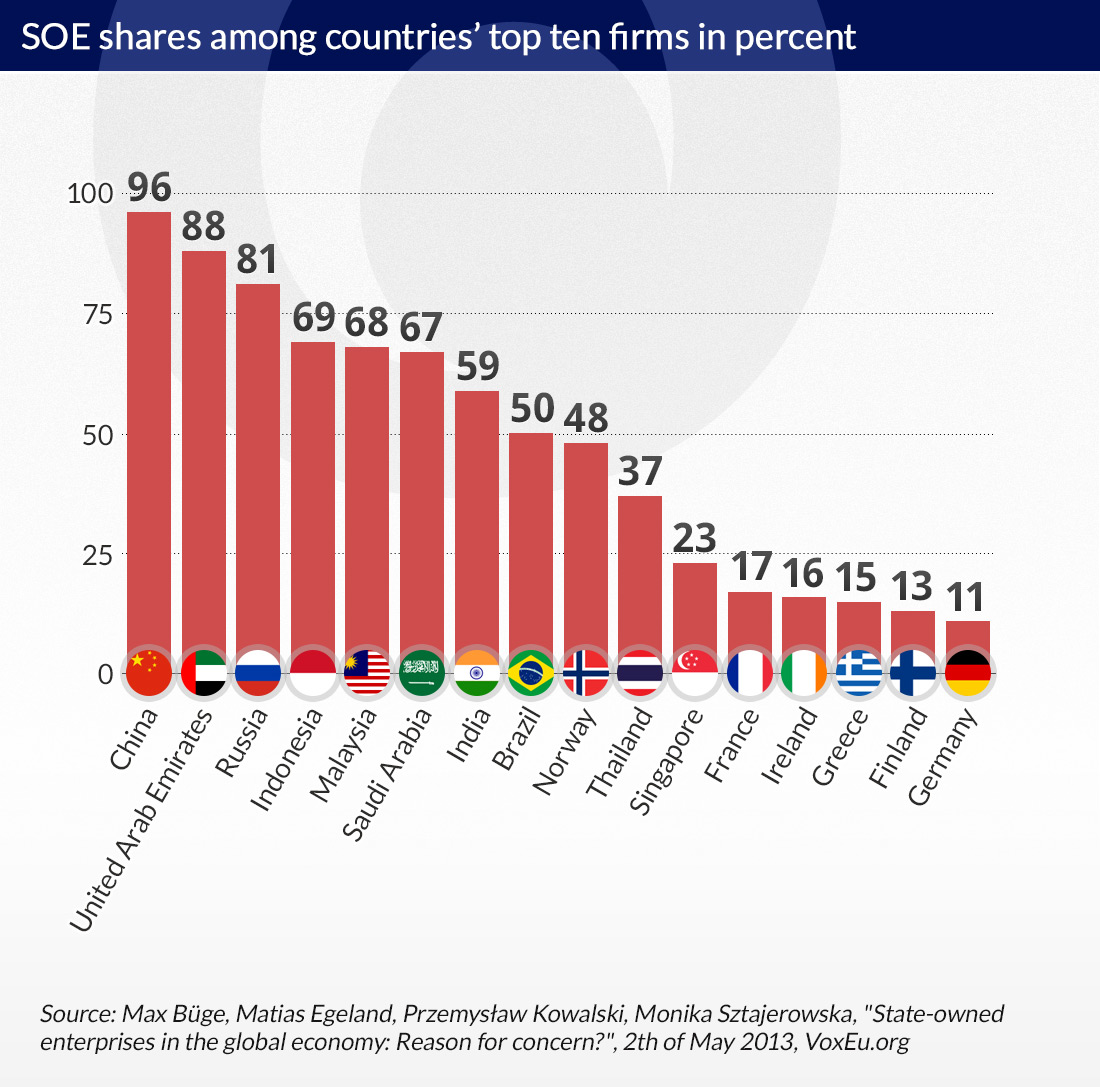 An example of being enchanted by ideas from the past, spurred on by the SLD, is the idea of a return to a state controlled construction sector within the economy, akin in shape and audacity to the pre-war Central Industrial Region (COP). A new wave of economic state intervention would protect struggling investments, as well as guaranteeing the creation of new jobs.

Because only few remember those times, the idea could seem very attractive. It is worth having a closer look at the circumstances that led to the construction of the pre-war COP, as well as looking at the potential costs of setting up such an imitation.

The pre-war COP, built in the vicinity of the Vistula and San river fork, has grown into a legend. It was to be the medicine for the consequences of the Great Depression before the 1930s and a step toward industrialization through the rearmament of the military. The latter was also a chief goal for the creation of the COP. Poland, which had hostile neighbors to the East and West, needed its own arms industry irrespective of the costs. Today, a few new cities and numerous power stations and factories are all that is left of the COP. In truth construction of most of these finished after the war had started. Germany, which had occupied Poland, also needed arms factories. After their post-war renovation, most of these did very well, but only under an economy whose main advantage over the competition were very poor employment conditions for the labor force.

In any case, the most significant legacy left by the Central Industrial Region are the still active, but lacking any notable successes, sports clubs. The clubs are just surviving, similarly to most of the flagship companies of the former-COP. There are, however, a few exceptions to the rule. Most of the time these are privatized or completely new (thanks to special economic zones) aviation sector factories or such examples as the Rzeszow-based Zelmer (now part of the Bosch und Siemens group), which in its pre-war guise constituted the embodiment of the famous, but only up till 1989, Poznan factory Hipolit Cegielski.

COP in its new guise

The SLD’s plans are more modest than those of the Sanation authorities. Some 60 per cent of all the funds due for investment between the years 1937-1939 were spent on creating the pre-war COP.  That is nearly 2 billion in today’s zloty. Modern-day imitators would like to build new mini-COPs in the vicinity of the motorway intersection at Łódz, the Northern Industrial Region near the Tricity area, and a southern branch between Kraków and Katowice – as if there wasn’t enough industry in this most densely industrialized region of the country.

The state would set up infrastructure in these three artificial regions, as well as injecting a minimum of 1 billion PLN in live currency for each region. What can be gathered from the somewhat unclear explanations is that funds collected from taxes would go toward funding maximum state shares of 25 per cent in the companies created at these new COPs. It is also unclear how this would work with regard to public funding under the European Union.  Apart from that state subsidized credit preferences would also exist, obviously, as if there wasn’t enough opportunity for corruption in Poland. There is also talk of using the final agreements signed for special economic zones. All this would apparently create 5 million new jobs in the next 5 years.

The authors of this plan have a short memory that doesn’t cover the story of the famous plasma factory/laboratory, which was erected for the ‘higher purpose of the whole’ by industrialists and politicians in none other than Mielec – at the location of the pre-war COP. Following a media storm, prolonged investigations and other sad occurrences, some 20 years since the aforementioned company was set up the plant may finally start work as a completely private initiative.

Distrust and even hostility of the state toward business is so great in Poland that a large dose of naivety and irresponsibility is required to postulate the development of public-private partnerships that come from state support for the creation of hundreds of new, small (read: difficult to control) companies, which are majority owned by the state.  Job placements, in enterprises created with the appropriate impetus by party amateurs, would of course be created. However, and to the delight of SLD’s political adversaries, even more work placements would be created in consequence at the Central Anti-Corruption Bureau (CBA) and akin agencies.

State presence in the Polish economy, even without ideas for its full restoration, is still large. According Forbes Magazine, a business monthly, out of the 10 largest companies in terms of revenues 8 are state giants (Orlen, Lotos, PGE, PGNiG, KGHM, Tauron, PZU and PKO BP). Private capital is represented only by trading companies Jeronimo Martins (4th place in 2012) and Eurocash in 10th place.

The absolute domination of state companies among its economic heavyweights puts Poland in the company of countries such as China, Russia and India. This was brought home in an analysis carried out by four researchers employed at the OECD (Max Büge, Matias Egeland, Przemysław Kowalski and Monika Sztajerowska), published in May 2013 by web portal VoxEu.org. The analysis is entitled “State-owned enterprises in the global economy: Reason for concern?”

The authors ranked countries in terms of the presence of state owned companies among the 10 largest companies. China came first with an indicator of 96 per cent. If the Forbes methodology was used, Poland would also be at the forefront with 80 per cent.

It is worth mentioning that in France and Germany, where it is impossible not to notice a very strong influence of the state over the economy, its running and supervision is carried out using more refined and appropriate methods to the usually incompetent ownership control method. In modern-day ‘paper’ capitalism were performance is gauged with indicators and tendencies, and the majority of share, stake and bondholders do not have much of a clue what their companies do, there is an increasing conflict known in literature as the principal–agent problem. In short, it is based on the idea that company managers act in an increasingly brazen manner, mainly in their own interest, while caring less and less about the interests of owners and clients.

This syndrome appears to be equally strong if not stronger in state capitalism, and especially in countries such as Poland where important politicians with an outstanding knowledge of business-economics cannot even be counted on the fingers of one hand. State companies in Poland lack proper state control. It is enough to look at supervisory board memberships, where first fiddle is played by ministerial personnel, and whose fate depends 100 per cent on the caprice of ministers or, even worse, deputy-ministers who appear and disappear in a recently constant rhythm of so called government reshuffles. This is just one reason why Poland is not suitable for inventive experiments with new COPs and the creation of hybrid companies with a controlling state share. It is not worth it. It is a waste of hope, effort and money.

In spite of the opinions being spread over the last few years about the reputed conversion of the world to state control, this is not happening. Although on a global scale the share of the state in the running of economies seems to be increasing, this is mainly because for various reasons the significance of a few large countries, previously seen as colossi with clay legs, has increased beyond measure. I am talking about China, India and Russia, which continue to nurse their state-financial empires with great care. One can have a lot of empathy but a potential admiration for the social-economic order of these states would be the fruit with a very specific flavor.

Another group of countries that boost the indicator group for the increase of economic state control are Asian states such as Indonesia, Malaysia, Thailand and Vietnam, where state assets are the only significant source of capital. Brazil is a different example.

The third and most prominent reason for the general impression of an expanding state presence in the economy is connected with the depletion of crude oil reserves. Fears over the drying out of raw materials has led to a concentration of control over liquefied natural gas and petrol energy resources by companies that are completely state owned or effectively state-controlled. In 2010, out of the 15 concerns with the largest oil reserves, or equivalent, there were only two private enterprises. ExxonMobil was 11th and Lukoil 15th (source: State Capitalism, The Economist, January 21, 2012). The shale revolution (as long as it spreads beyond the U.S.) might change this picture.

The consensus about a significant state presence in enterprise becomes blurred when looking at the diagram below. It is apparent that leading technology sectors and production branches remain outside of state control. 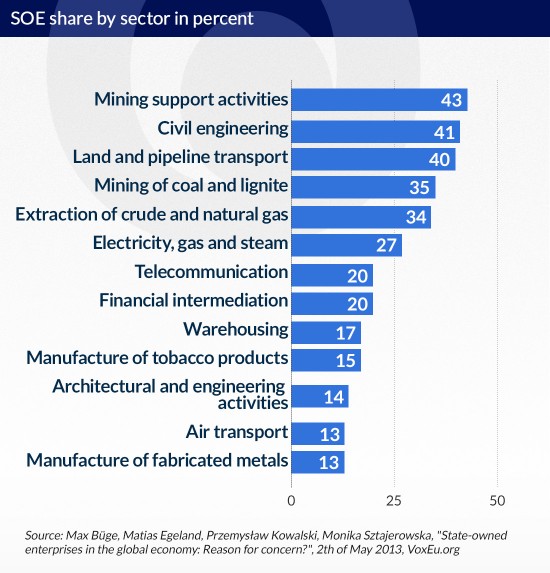 The diagram is part of a report published in 2013 by the OECD, entitled: “State-owned Enterprises, Trade effects and implications.” It states that “overall, the public enterprises sector in the OECD area has, overtime, become significantly smaller than in many emerging countries. Still, SOEs remain important across the board in a few OECD economies and in particular in network industries (energy, telecommunications, and transport) and the banking sector.” The data presented in the report indicates that that shares and stakes of state owned companies exceed 20 per cent of the GDP of some OECD countries. The average for the whole area is 8 per cent.

A state that runs a company is not a benefactor. Although it doesn’t have to be a parasite, its results when dealing with financial, material or human capital, are often mediocre. If one were to look for the so called objective reasons behind the presence of the state when running a company, then it is quite natural to assume that the state uses this to cover up its incompetency and failures within the legal sphere of institutions and tools used for solving conflicts, as well as social security services (health, pensions, education, private and social failures, especially those resulting from unemployment).

Further efforts at a rational valuation – one that is more or less stripped of ideology and politics – use the argument that state ownership gives the treasury access to predictable revenues in the form of dividends and taxes. This argument, used by so called industrial-politics (the optimization by the state of production in expectance of needs, changes and challenges) is very appealing. Hopes pinned on this idea never cease, although the only marginally successful examples of industrial-politics come from countries with a military-type social discipline (Japan South Korea, Singapore). Of course one can imagine industrial-politics that are run not by divisions, armies and fronts for state companies, but as a result of reasonable regulatory activity. However, in the face of the complete decline of Polish politics, these are merely pipe dreams.

State ownership could be a desired form in the case of natural monopolies, or those where this is viewed as rational (energy transfer, railway, gas deliveries). A completely separate sphere consists of services in the healthcare sector where there is accountability and questions of effectiveness. But there are also calls for a larger state presence here due to the largely blameless differences in earnings. The state does not have to be the enemy as long as it knows its place, as long as it is reasonable, efficient and effective in protecting the interests of its citizens.