The Varangians in Kiev

11.05.2015
The landing force of foreign specialists, known in Ukraine as “the Varangian team”, are appointed to successive positions in the state administration. Are Varangians the last hope of Ukraine or just a fig leaf used by the new government? 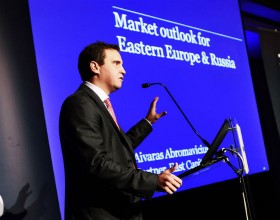 The Minister of Economy, the Lithuanian Aiwaras Abromavicius has an Ukrainian wife and has been living in Kiev for many years. (CC By East Capital)

According to supporters, it is a remedy against the major scourge of Ukrainian society – corruption. Sceptics argue that it is a smoke screen for the authorities, who lead the same life as Yanukovych’s team did.

The “Varangian team”  is the name once given to Scandinavian Vikings who wandered into the regions of today’s Ukraine.

In autumn last year, the administration of the Ukrainian President, through the National Council of Reforms, commissioned head-hunting agencies to indicate 24 people for key positions in the state administration. “They have management experience in the economy, politics and business. The team  includes Georgians, Lithuanians and Americans, including former ministers,” said the head of the Petro Poroshenko’s parliamentary group, Yuriy Lutsenko.

According to the information published by the Kiev Centre of Political Studies and Conflictology (KCPSC), the US authorities are believed to be standing behind the “foreign landing force” in the Ukrainian government. The appointment of foreign ministers is supposed to have been one of the conditions imposed on President Petro Poroshenko by the American Vice President, Joe Biden, as the prerequisite to grant macroeconomic aid to Ukraine.

Ultimately, 17 candidates were selected. Two of them,  Aiwaras Abromavicius and Natalie Jaresko, were appointed as ministers; others ended up on the “substitute bench”. The “Varangian team” has been supplemented, or rather dominated, by the landing force from Georgia composed of the former President of this country, Mikheil Saakashvili, and members of his team. Saakashvili used to study in Ukraine, and his relations with this country are very close, whereas the charges of power abuse brought against him by his successors forced him to leave the country. Ukraine was the natural direction of political emigration for him.

The USA, like Canada, due to the presence of a large Ukrainian diaspora in those countries, is the traditional destination from which Ukraine has been importing professionals for years – descendants of emigrants do not face major problems related to adaptation in their ancestors’ country. From the Ukrainian point of view, the Baltic states are almost not abroad.

Foreign landing force in the government

On 2 December, the Ukrainian Parliament approved the composition of the government consisting of three ministers from other countries.

The position of Minister of Finance was taken up by an American of Ukrainian origin, Natalie Jaresko, formerly employed in the Bureau of Economic and Business Affairs of the US Department of State, having acted in 1992-1995 as the head of the economic department of the US Embassy in Kiev. From 1995 she worked for the investment fund Western NIS Enterprise Fund operating in Ukraine and Moldova, becoming its President in 2001. In 2006 Jaresko established the Horizon Capital company, comprising the investment funds Emerging Europe Growth Fund I and II. In the years 2005-2010, she was a member of the Consultation Council for foreign investment affairs, established by the former President Viktor Yushchenko and the consultation committee of the Ukrainian Foreign Investment Promotion Centre acting at the Council of Ministers.

The Minister of Economy, the Lithuanian Aiwaras Abromavicius has an Ukrainian wife and has been living in Kiev for many years. He is a partner of the Swedish investment company, East Capital, which invested USD 200 million in Ukraine. Earlier, Abromavicius worked for East Capital in Russia.

The Estonian, Janika Merilo was appointed as his advisor – she will deal with attracting foreign investments, improvement of investment climate, coordination of international programmes and development of the “electronic government” programme.

Although Merilo had been presented as the managing director of the Ukrainian Venture Capital and Private Equity Association, with rich experience in the investment, media have disclosed that she took up that position only four months before her appointment to the function in the government.

The Ministry of Health has been entrusted to Alexander Kvitashvili, who acted in the same capacity in the Georgian government in 2008-2010. According to KCPSC Kvitashvili owes his nomination – like Vice Minister of the Ukrainian Ministry of Interior, Eka Zguladze – to Wladimir Gurgenidze, the former Prime Minister of Georgia in Saakashvili’s period, who earlier held managerial positions in the American ABN AMRO Corporate Finance and the Canadian investment bank Putnam Lovell NBF.

The former President of Georgia, Mikheil Saakashvili had initially been indicated as the head of the newly established National Anticorruption Authority; however, when it finally turned out that in accordance with the law he would have to renounce his Georgian citizenship, he resigned from running for this position, becoming an advisor to Petro Poroshenko.

The Varangians of contemporary Europe

The idea to appoint foreigners to governmental positions has raised mixed reactions in Ukraine. The supporters of this solution argue that the presence of foreigners in the government is the only solution under the circumstances of the lack of political will among top authorities to conduct reforms, whereas without their appointment Ukraine would not even have the slightest chance of receiving macroeconomic aid from the West.

“The presence of foreigners in the government, even those holding an only slightly recognisable name, is the guarantee that the financial aid granted by the West will be returned. It is also evidence that the western partners do not trust the Ukrainian authorities,” claims Andriej Jermolajew, from the “New Ukraine” Institute of Strategic Studies.

The newcomers will be more effective than the local staff, since they have gained experience in conducting successful reforms, and at the same time they are not associated with the local interest groups, they have no political ambitions – argue the supporters.

On the one hand the critics stress that the governing team admits their lack of competence and political backing, and on the other hand, it expresses the aversion to develop new Ukrainian elites based on young, non-discredited people. Petro Poroshenko, as the founder of the Party of Regions and Minister of Economy in the times of Yanukovych and Arseniy Yatsenyuk, publicly praising the Yanukovych’s Prime Minister Mykola Azarov indicating him as an example to follow in politics, are obviously not interested in the development of Ukrainian political competition that is not embroiled in corruption.

In the Ukrainian politics, the “Varangians” will be always perceived as a foreign body and so do not pose such a threat to the governing team as would a new, professional and non-discredited elite of the country originating from Maidan.

According to the critics, both Poroshenko and Yatsenyuk participated for many years in the development of the corrupt system and they know very well what should be done to demolish it.

“The current elite knows perfectly well what to do in order to change the situation in Ukraine and this is the reason why they do not do it – changes would inevitably limit their capacity. Foreign advisers in Ukraine are needed, according to the best scenario, to mislead people,” judges Valentin Hładkych, the expert of the Kiev Lewiatan analytical group.

Anyway, the possibilities of foreigners are seriously limited. Already at the very beginning the “Varangians” received politically-appointed vice ministers for cooperation, who effectively block changes.  Mikheil Saakashvili, the advisor to Petro Poroshenko, has been applying for a residency permit in Ukraine for almost two months.

“The officers of the immigration service demand that I pay a bribe for issuing the document, and I am not going to pay it,” he complained in the commentary for the Ukrainian media, reporting the effects of his work in Ukraine.

Another member of the “Georgian landing force” – the deputy Prosecutor General, David Sakwarelidze – has disclosed in an interview published by the Dzerkało Tyżnia weekly that after taking up his position he was offered “maintenance costs” and USD 10 million per month in exchange for protecting illegal business deals. However, the institution led by him initially refused to accept the notification of an offence submitted in that case by one of the MPs.

According to the media reports, Aiwaras Abromavicius threatened that he would leave the government. “The Minister was attacked in the Parliament that he is unprofessional, doesn’t understand anything and in general, should go away,” commented Ihor Żdanow, the Minister of Youth and Sport, on Facebook.

Let’s give them our customs

Despite the relatively bad beginnings and poor forecasts the “foreign landing force” is still seen as the only remedy for Ukrainian corruption. Recently, MPs of the Self-Help party, members of the governmental coalition, have proposed that the customs service – generally recognised as one of the most corrupt institutions – should be taken over by specialists from the West.

“Due to the corruption at the borders, Ukraine loses enormous amounts of unpaid duty. Let’s do the same as Bulgaria and Romania did some time ago – let’s hand over our customs offices for management by Swiss, German, or even American customs officers for a year or two,” Oleh Bereziuk, the head of the Self-Help parliamentary club argued at a meeting of fraction leaders of the Ukrainian Parliament.

The internet public opinion survey conducted by the party has shown that Ukrainians support such a solution. 88 per cent of respondents submitted positive answer to the question of whether management of the Ukrainian customs service should be entrusted to Germans or other EU member states. People believe that only foreign specialists can eliminate corruption.

So it is highly likely that soon the British will join the Baltic and Georgian landing force of civil servants.

The Minister of Economy, the Lithuanian Aiwaras Abromavicius has an Ukrainian wife and has been living in Kiev for many years. (CC By East Capital)