Ukrainian amber is a problem, but it could be an opportunity

03.07.2017
Ukraine is a global leader when it comes to amber deposits. However, large sums of money that could be earned from the amber business are still bypassing the Ukrainian budget. 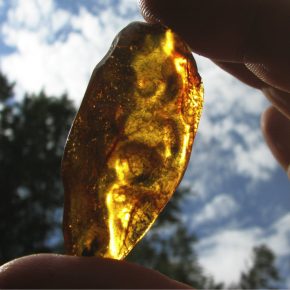 With amber deposits estimated at 15,000 tons Ukraine is ranked the second in the world with the largest deposits of this commodity. In addition Ukraine has the highest share of amber jewelry in its deposits. The areas of amber deposits cover 380,000 hectares of land. According to the official data legal mining currently reaches 3-5 tons per year. However, hundreds of tons of amber are mined and exported abroad illegally. In the summer 2016 the Ukrainian Prosecutor General Yuri Lutsenko estimated that the scale of illegal revenues from amber mining are so high that they would be sufficient to cover the country’s defense expenditures.

According to the estimates of the Ukrainian Ministry of Ecology and Natural Resources, illegal mining of amber has led to the destruction of 2.6 thousand hectares of land, including forest areas in the Volyn Oblast, Rivne Oblast and Zhytomyr Oblast.

Amber Republic in the Volyn and Polesia regions

In Kiev, the territories of the Ukrainian-Belarusian borderlands suffer from “amber rush” and are overrun by thousands of armed miners. They are now increasingly referred to as the „Amber Republic”, similar to those created in the parts of the Donbass region seized by the pro-Russian separatist. The power of the central government in this region is purely illusory, and the national guard and police subordinated to Kiev are not able to control the situation.

Until recently, there were clashes only between diggers and the government forces. Over the last few months internal feuds between the groups of diggers have also been observed.

In January in the town of Olesk in the Volyn Oblast – the informal capital of the Amber Republic – one person was killed and several were wounded as a result of clashes. Several dozens of attackers armed with automatic weapons were throwing grenades at local residents. According to the police the raid was an attempt to intimidate the local population, which did not want to share the right to illegal extraction with the criminal groups from outside the region.

In search of amber the diggers even destroyed the local railway line. The media reported, that at the beginning of March a few hundred armed diggers have been extracting amber for several days using water pumps, washing out the embankments of the railway tracks.

Finally, in response to these events, the authorities decided to send national guard units to the Ukrainian-Belarusian borderlands. This did not change much. Only a dozen or so days later, near the town of Sarny, almost two thousand illegal amber miners blocked the international route Kiev-Kovel-Chełm, demanding the release of one of their colleagues arrested a few days earlier, and protesting against the policy of the authorities who have been issuing amber mining licenses to companies from outside the region. In the Oblast capital, the city of Rivne the police headquarters rocket-propelled grenades.

„There are no other jobs in the area, so amber digging is their main occupation,” explained the reasons for the blockade Serhiy Bakaj, the deputy chief of the illegal mining task force appointed by the Ministry of Interior.

„In the Zhytomyr and Rivne Oblasts the situation got out of control. In fact, we now have a tiny state functioning within our state, with its own laws and rules, where the national guard cannot enter and where the police are not able to control the situation. This could have serious consequences and is a matter of national security,” concluded Dmytro Dobrodomov, a member of the Ukrainian Parliament.

„The issue of illegal extraction of amber could be resolved through legislation. The fact that it hasn’t been adopted proves that it’s profitable for some people to maintain the current situation. In the first place, it is a lucrative business for defense and law enforcement institutions,” he argued.

„The thugs’ assault on the residents of the village of Olesk is a clear example of how the inhabitants of the „amber country” have been suffering for many years from lawlessness and criminality. Where there is big money, a lot of blood is shed. The Supreme Council’s failure to adopt appropriate regulations has resulted in human death,” commented Borislav Rozenblat, a member of the Ukrainian Parliament and one of the co-authors of the draft law on the amber market.

He argued, that the Act, if adopted, would simultaneously solve several problems. First of all, the ecological issue, because it would impose the obligation of post-mining land reclamation. In addition it would take the amber trade out of the grey area through the creation of regional commodity exchanges, and would inject cash to the local budgets as they would receive a part of fees for the extraction and a part of taxes from companies involved in amber mining and trade.

However, the majority of Ukrainian MPs had a different opinion and at the beginning of February the Act was rejected in a vote. The ultimately failed struggle for a statutory regulation of the situation with Ukrainian amber took almost two years. The first reading of the draft Act on mining and trade in amber took place in the parliament in the spring of 2015. In the summer of that year, the Ministry of Ecology and Natural Resources revoked the previously issued amber mining licenses and stopped issuing new ones until – as it announced –a transparent mechanism regulating amber production and trade is developed. The Ministry called for the toughening of penalties for illegal mining.

Borislav Rozenblat, the author of the Act rejected by the parliament, argued that the decision of the MPs is the result of „the lack of political will” on the part of the state leadership, which is not interested in the elimination of illegal mining. He also announced the submission of a new draft act.

Ukrainian political scientist Alexei Jakubin expressed a similar opinion in an interview with the radio station Golos Stolitsy. „They didn’t adopt the ‚Amber Act’ in the parliament as they do not want to change anything about the illegal amber business. The MPs are satisfied with the lack of transparency in the amber business. They will do anything to delay its statutory regulation The politicians claiming that we need to take the amber business out of the grey area are attempting to conceal the desire to preserve the current situation in order to obtain maximum profits,” he commented.

According to the Ukrainian MP Serhiy Yevtushok, the attempts to adopt the Act on the extraction of amber have been to no avail as top state officials are earning huge amounts of illegal income taking advantage of the lack of regulations in the amber business. He argues that the regulation of the amber business could bring to the Ukrainian budget approx. UAH5bn per year, i.e. more than USD185m, solely due to the fees and taxes.

Meanwhile new companies affiliated with Ukrainian politicians are now entering the amber market. At the beginning of the year, Volynprirodresurs company was granted licenses for the extraction of four deposits with a total surface area of 46,000 hectares. The governor of the Volyn Oblast, Ihor Palytsia claimed that these deposits gave the possibility to generate annual profits ranging from UAH500m to UAH1bn.

The company did not hold its licenses too long. In February at the request of the court, the Prosecutor’s Office launched an investigation concerning the way in which Volynprirodresurs obtained the licenses. As it turned out, the company with a share capital of UAH280,000, is run by Palytsia’s business partner. The court questioned the legality of the funds that were used to pay for the amber mining license. According to the media, the investigators were not able to find the accounting records of the company that took over amber deposits worth hundreds of millions of dollars. Its address also turned out to be fictitious.

Lithuania ahead of Poland as regards the amber business

Regardless of the failure of the project of statutory regulation of the amber business, new ideas are emerging on how to fix the problem. In mid-March, the State Service of Geology and Mineral Resources of Ukraine announced plans to launch the Ukrainian amber market.

„We hope that the European partners will cooperate with legitimate Ukrainian companies only. For the time being, the problem of amber in Ukraine and its illegal mining remains unresolved. The State Service of Geology and Mineral Resources of Ukraine sees a way out of this situation in the cooperation of three parties – the state, the business and the local population, with the state performing the regulator’s function and the business providing financial resources, the culture of utilization of deposits, modern technologies and safety. In this way the local population will gets job, legal income and will be guaranteed safe working conditions,” said Iryna Suprun, an adviser to the Head of the State Service of Geology and Mineral Resources of Ukraine, while presenting a vision of a solution to the amber problem.

At the same time the authorities of the Volyn Oblast proposed the creation of an association called „Ukrainian Amber” bringing together Ukrainian companies involved in the legitimate extraction of this commodity, the geological survey of deposits, processing and trade in finished amber products. The proposal also includes the creation of an internal legitimate market for amber, which would be sold in a specialized commodity exchange.

Although Poland is currently among the leading European manufacturers of amber jewelry, it’s not the Poles but amber manufacturers from the tiny Lithuania that now have the best chance to play a leading role in the regulation of the Ukrainian amber market and indirectly control the world’s largest deposits.

In March, during the Amber Trip exhibition held in Vilnius, amber producers from Lithuania and Ukraine agreed on mutual cooperation. According to their arrangements the association of legitimate companies operating in the amber industry in Ukraine could be established in the coming months under the guidance of the Lithuanians. The Ukrainian amber would enter the international markets through Vilnius, which wants to participate in the certification of origin of amber from the Polesie and Volyn regions. 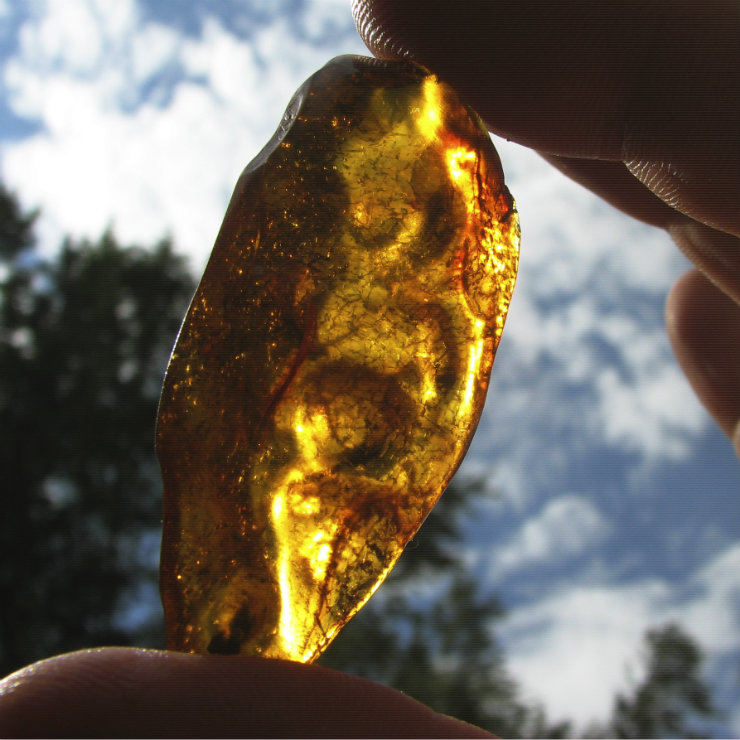