14.04.2015
The labour market is really a bright spot of the Polish economy. Employment and wages are growing, unemployment is falling, and a number of indicators show that companies report increasing demand for employees. However, we still face significant lags in economic activity, in particular, among the elderly and women. 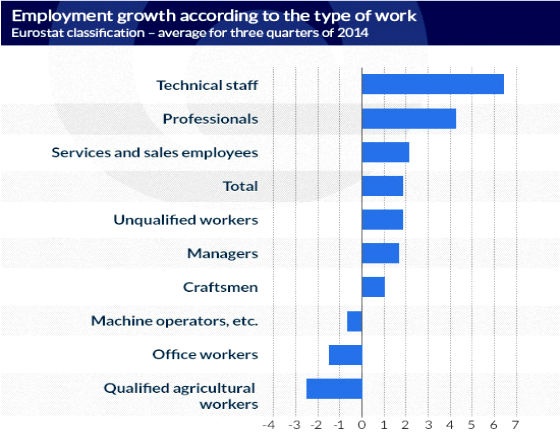 Despite what pessimitis claim, this is due to emigration, expansion of bureaucracy or problems with data. The improvement in the Polish labour market is genuine, visible in many indicators and results mainly from growing labour demand among private enterprises. Consumer sentiment indicators show that people feel it. Obviously, this does not mean that everything is perfect ― the Polish market still needs many changes and many years before it will be possible to say that the situation is acceptable.

Consumers satisfied with their lives

At the beginning of 2014, the mainstream view was that  could approach 12% by the end of the year. Instead,  it dropped to 11.5%. Over the last 18 months the average decline of the seasonally adjusted unemployment rate was 0.15 percentage points per month. Unemployment measured by survey method is only 8%. Thus, we need only a few months to reach the previous record low of 6.9%. The labour market is very slowly transforming from an employer’s market into an employee’s market. We are still not at that point, but somewhere in the area of 7-8% is the level below which employees gain a bargaining position strong enough to be able to negotiate a solid growth of wages. 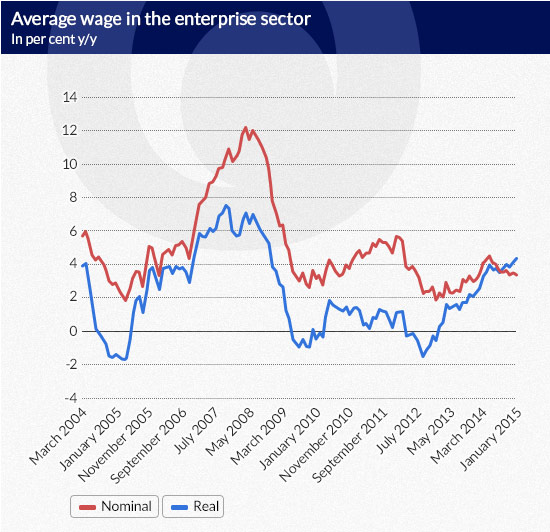 Questionnaire survey data from the whole economy shows employment is growing at 2%, while data from the enterprise sector (defined by the Central Statistical Office (GUS) as non-financial enterprises employing over nine persons) shows growth of 1.2%. Contrary to widely held opinions, bureaucracy is not  responsible for labour demand. Questionnaire data shows public sector employment is stable, while the private sector is responsible for the bulk of growth. Rising labour demand is also confirmed by economic activity ratios. In February, the employment sub-index in the PMI reached its second historical peak. At the beginning of 2015, the employment forecast indicator published quarterly by the National Bank of Poland increased to the highest level since 2008. It is really difficult to claim ― as some do ― that the improvement in the labour market is a statistical anomaly.

Consumers also feel what is going on. The Polish Statistical Agency’s consumer sentiment index is close to the level consistent with a peak of economic expansion. In a survey conducted by the CBOS organisation in December 2014, the question: „Does your family have a good life?” was answered positively by more than 50% of respondents for the first time in Poland’s modern history. Interestingly, this indicator (the percentage of „yes” answers to the question) had three waves of growth over the last quarter century: the first one occurred in 1993-1997, when the economy bounced back very strongly out of the post-transformation slump; the second one ― in 2005-2008, came when the economy experienced the positive effects of the EU accession; and the third one began in 2013. Clearly something is happening in the economy that is improving the mood of the population.

Work for the qualified

Where does the labour market improvement come from? From improved economic forecasts and sentiment among entrepreneurs. Companies hire when they see improved growth perspectives. Employment growth and changes in unemployment are strongly correlated with investment ― expenditure on fixed assets also represents a function of expectations related to the sustainability of the business cycle. Investment throughout the recent year grew at a rate of 9-10%. This mainly includes investment in renovating existing fixed assets, whereas major development projects are still missing. Thus, future trends in the labour market will depend on such large projects. 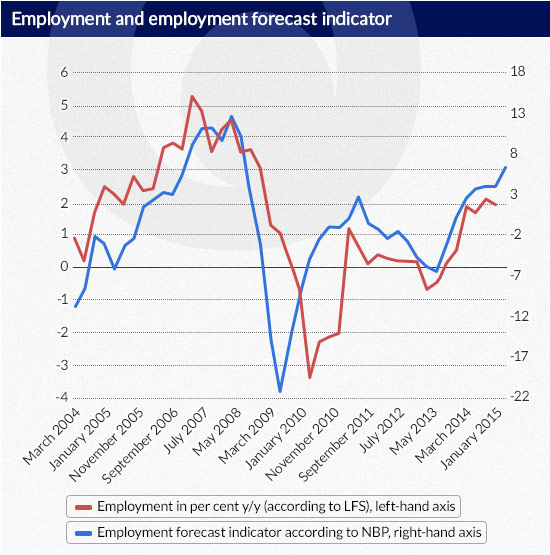 It is clear that foreign investment in back-office centres plays a significant role in the labour market. Kraków, Wrocław and Gdańsk are magnets for such centres. This is where foreign corporations deploy, for example, their accounting services, etc. 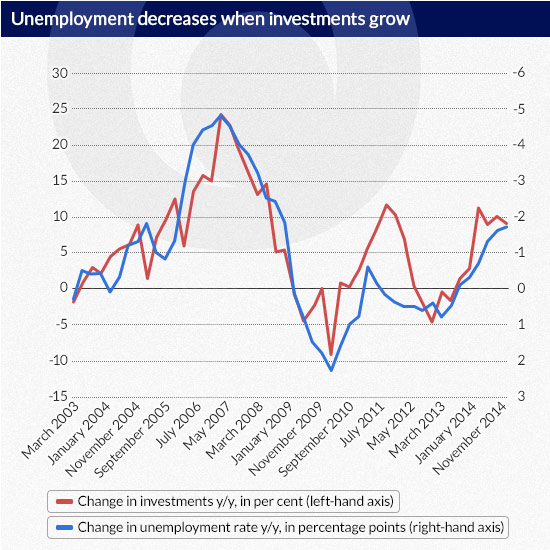 Other areas recording the highest employment growth include services like  lawyers or architects, information and communication and trade or catering. The fastest rate of employment growth is for positions requiring skills above elementary level. This refers to positions requiring broad knowledge and analytical skills, as defined by Eurostat. These are professions for which university education is necessary. That means the  economy is generating higher value added jobs.

The employment rate still too low

Obviously, the improvement in the labour market does not mean that everything is fine.

This problem is particularly visible among the young, the elderly and women. The employment rate among people aged 15-24 and 50-64 in Poland is approximately 10 percentage points lower than the average for the EU and approximately 20 percentage points lower than in Scandinavia. One of the reasons for low youth employment is that Poland has a relatively high percentage of student, but the percentage of young people who do not study and do not work is also higher in Poland than in many western countries. Among the elderly, a pension system which for many years encouraged early retirement, is the reason for the low employment rate. However, this is changing. Since 2007 the employment rate among people aged 50-64 has increased from 35 to 44% and will probably continue to grow due to the raising of the retirement age and elimination of early retirement.

The diagnosis for the lower employment rate among women is more difficult. Is this due to cultural factors? Or maybe a dysfunction of the labour market? Do we face discrimination due to gender? Or maybe, the model of a mother looking after the home plays a major role? The thesis of the “Polish mother” is difficult to confirm since it would be accompanied by increased fertility rate, whereas in Poland the fertility rate is one of the lowest in the EU. In addition, the correlation between the employment rate among women and the fertility rate is clearly positive in the EU. This suggests that people decide to have children in areas where it is easier for women to find a job.

I would search for reasons for the low employment rate among women, among others, in the lack of institutions allowing for flexible working arrangements. In Poland, only every tenth employed woman works part-time, whereas in the European Union it is every third woman. In Poland, a woman has to face the following choice ― either she will be fully devoted to work, or she will have nothing. In developed countries, it is much easier to combine work with family duties. 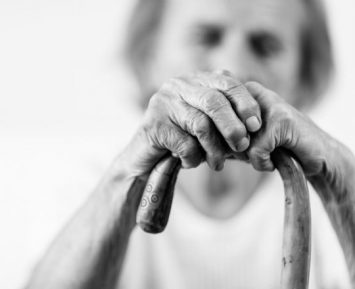