Western assistance is only lining the Ukrainian authorities’ pockets

06.07.2015
Ukraine could be firmly back on its legs within a few years with a reasonable support of the West, despite all its current problems. But this requires a change of the mindset of the ruling class – a challenge far greater than obtaining the funds. 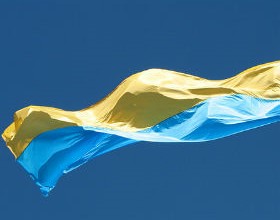 The trade data announced by the State Statistics Service of Ukraine (Ukrstat) show that the Ukrainian finances are in a much better shape than the authorities would like to suggest. Unfortunately, the rulers won’t let a single opportunity slip when it comes to making money on the war hoping that the West will not leave the 46 million citizens they are holding as hostages without help.

It’s a paradox that – according to the Ukrstat data – the Russian invasion has boosted the balance of external trade. In contrast to the deficit of USD 8.5bn dollars recorded in 2013, Ukraine has clocked a surplus for the first time since 2005. The positive balance at the end of last year amounted to USD 3.9bn. This was a result of a dramatic decline in imports – the deficit in foreign trade of goods had fallen from 13.5 billion in 2013 to only 470 million. And while the traditional surplus in the trade of services – resulting mainly from the transit of Russian gas – dropped by USD 1bn, reaching the amount of USD 5.6bn, Ukraine recorded an overall surplus.

In general, the reduction in Ukraine’s trade exchange with foreign countries had a positive impact. Imports of goods and services dropped by almost 40 percent while the corresponding exports by only about 17 percent. Data for the first quarter of 2015 are even better. The surplus has grown to USD 1.2bn (about USD 120m more than last year), and the positive balance of trade in services was – for the first time in many years – accompanied by a positive balance of trade in goods. It is currently amounting to USD 380m dollars, while a year ago it posted a deficit of 175 million. What is particularly optimistic is the radical reduction of trade with Russia and the forced search for other markets, which will pay off in the coming years.

The debt is there, but is hardly felt

According to the Ministry of Finance, Ukraine’s debt, including direct state debt and state guarantees, reached USD 60bn at end of 2014, thus being about USD 3.3bn lower than the year before. Due to the devaluation of the hryvnia, the debt denominated in the national currency increased by 90 percent. Despite that, Ukraine’ external debt – even in comparison with the Polish one – seems fairly decent-sized. It is currently standing at USD 30bn.

“This year we have to pay off 90 billion hryvnia of foreign debt commitments”, said Ukraine’s Prime Minister Arseniy Yatsenyuk in mid-May. With the hryvnia’s having lately strengthened to the dollar, this amounts to about USD 4bn. The figure that Poroshenko and Yatsenyuk’s team is trying to present to the Western financial institutions as a burden that would be unbearable without another tranche of macroeconomic support could in fact be repaid by Ukraine on its own without much trouble. The problem is that the money that Ukraine could and should have spent on servicing this debt, has been for years siphoned off to the oligarchs’ accounts in tax havens or simply embezzled by members of the ruling camp, instead of supporting the budget in the form of taxes.

Sticky hands of the ruling elite

This is clearly illustrated with the example of the Ministry of Defense spending. Finance Minister Natalie Jaresko talks of military expenditure reaching USD 5m per day. In talks with Ukraine’s Western partners, president Poroshenko quoted a daily amount of USD 10m. In annual terms, this adds up to an outflow of USD 1.8-3.6 billion from the State budget to the army. These are some of the expenditures that – according to the official story – are putting such a strain on the budget of the war-tormented country that further tranches of financial aid are necessary. The problem is that the soldiers both on the battlefield and in the backlines haven’t seen this money. It is not the Ministry of Defense, but thousands of volunteers who are buying with their private funds food, uniforms, basic medicines, and even weapons which, according to military account books, have been supposedly purchased for millions of dollars.

Citizens use their own money to assemble armored vehicles from scrap, to buy helmets, bullet-proof vests, first aid kits, to sew uniforms for the recruits. The soldiers wait for months for the officially promised payments – the money only features in the army’s accounting books. In one incident, hundreds of newly drafted recruits, who were held hungry, without uniforms or equipment in a training center in the West of the country staged a regular revolt demanding that the equipment purchased for them – according to the official documents – be released to them.

In 2014 volunteer organizations estimated the scale of plunder carried out by ruling camp representatives – at the expense of the soldiers – at 70%. There are many indications that this is even greater in 2015. In May, the Parliamentary Committee for Fighting Organized Crime and Corruption dealt with the allegations of embezzlement of budget money against the government and the heads of State-owned companies. Only during the first two meetings the Committee confirmed the embezzlement of 3.2 billion hryvnia and at the end of May the Office of the General Prosecutor revealed the embezzlement of 6 billion hryvnia allocated by the central bank to four banks under a refinancing scheme. Their executives allegedly granted huge loans to insolvent companies controlled by themselves and bought their junk bonds.

If we were to add up only the major and recently disclosed scandals in the Ukrainian ruling elite, the amount that Ukraine would recover would be enough to pay for more than half of this year’s foreign debt obligations.

Mariupol – the key to trade balance

Ukrainian analysts predict that the devaluation of the hryvnia and the associated increase in the prices of imported goods, along with the simultaneous reduction in the purchasing power of Ukrainian consumers, will further strengthen the downward trend in imports, rendering a highly positive balance of trade once again. And it would take the Russians several years to realize the threat concerning the diversion of the supplies of natural gas to European customers so as to bypass Ukraine, depriving it of the transit revenue. If it actually were to be implemented.

Maintaining the Ukrainian control of the strategic port of Mariupol on the Sea of Azov, through which a large part of the Ukrainian metallurgical production is exported, will be a key element in the game for this year’s positive trade balance. If the port falls, or rather is handed over to the Moscow-backed hit squads as a result of further back room deals of the ruling camp with the Kremlin, the positive balance of trade and the perspective of a recovery of the Ukrainian financial system will become a pipe dream. This may happen, as indicated by a decision taken at the end of April 2015 by Poroshenko’s group Roshen, which decided to shut down its sweets factory located in Mariupol and evacuate its production lines from the city, and Poroshenko’s accompanying proposal for a demilitarization of the village of Shirokino blocking access to the city. It is seen as an attempt to open the road to Mariupol for the Russian militia.

The more you look at Ukraine’s economic performance and financial indicators, the clearer it becomes that with relatively little macroeconomic support and a reasonable program of government debt restructuring – even in the face of the war – our Eastern neighbor could be out of the woods within a few years. It would only require meeting a few simple conditions.

The oligarchs who took power after the overthrow of Viktor Yanukovych’s regime would have to stop playing their double game, in which they simulate the defense of the country and at the same time lead behind-the-scenes talks with the Kremlin on the protection of their Russian businesses, stop defrauding budget money, learn to pay taxes and to think about developing the economy instead of holding out their hand to the West, pleading for further billions in assistance funds, which then go straight into their pockets. The past year of their exercise of power shows that this is very unlikely.