A long way to the euro, even if we want it

11.05.2015
The chances of Poland entering the euro area in the coming years are slim. The reasons for this are political and are connected with the constitutional provision that Narodowy Bank Polski has the exclusive right to issue money and implement monetary policy in Poland. 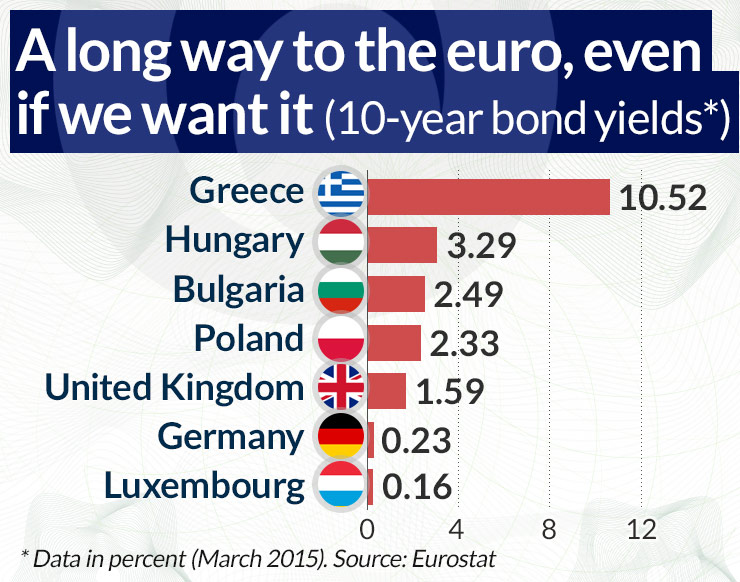 Also from an economic standpoint, Poland still does not meet all the conditions required to join the euro area.

Article 227 section 1 of the Constitution adopted in 1997 provides that National Bank of Poland „shall have the exclusive right to issue money as well as to formulate and implement monetary policy. The National Bank of Poland shall be responsible for the value of Polish currency”. Such unambiguous wording means that the introduction of the euro requires an amendment of the Constitution, which in turn requires a two-thirds majority in the National Assembly. This is highly unlikely amidst the current sharp political conflict.

That nothwithstanding, the Bureau of Government Plenipotentiary for Euro Adoption in Poland prepares a monthly Nominal Convergence Monitor, which examines the preparation of the Polish economy for accession to the euro area and the degree to which the convergence criteria (the Maastricht criteria) are met. The Monitor also assesses compliance with the convergence criteria in the individual member states and examines the market expectations concerning the date of adoption of the euro by Poland. In April the Monitor was published with data for February 2015. The data indicate that we are increasingly similar to the countries already belonging to the euro area.

In accordance with the definitions of the European Union, prices are considered stable if the average rate of inflation recorded in the course of the preceding year does not exceed that of the three member states with the most stable prices by more than 1.5 percentage points. Inflation is measured by the Harmonised Index of Consumer Prices (HICP) indicator used by the Eurostat.

The interest rate convergence criterion is fulfilled if over the preceding year the member state has had an average nominal long-term interest rate that does not exceed that of the three member states of the EU with the most stable prices by more than two percentage points . The interest rate is measured on the basis of the yields of long-term government bonds or comparable securities, taking into account differences in national definitions.

The exchange rate criterion means the participation of the country’s currency in the mechanism of the European Monetary System. The exchange rate must remain within an agreed fluctuation band, without severe tensions for at least the last two years before.

The public finance criteria are met when the country is not placed under the excessive deficit procedure. This means that the ratio of general government deficit to GDP cannot exceed 3%, unless the excess is exceptional and temporary, and the deviation from the threshold is only slight. The ratio of public debt to GDP should not exceed 60%, and if it does, it should be sufficiently diminishing and approaching the threshold of 60% at a satisfactory pace.

Many economists believe that the convergence criteria are no longer appropriate to the situation in the European Union following the financial crisis. Interest rates in most EU countries are very low and inflation is negative. Meanwhile, both the inflation and interest rate criteria refer not to absolute values, but to reference values. Low inflation results from the fall in fuel prices and weak economic growth. The low yields of government bonds largely result from the interventions of the central banks, and in particular the ECB. The debt of countries which are not in the euro area is lower than of those which have been using the single currency for the past 15 years.

When calculating the reference values for inflation and interest rates, the data from countries which significantly deviate from the averages is rejected. This further strengthens the arbitrary character of the assessments.

Like some of the other Central and Eastern European countries, during the first years of transformation Poland struggled with high inflation, significantly exceeding European Union standards. In 2008, Lithuania was not accepted into the euro area because its inflation exceeded the reference level by 0.1 percentage points. 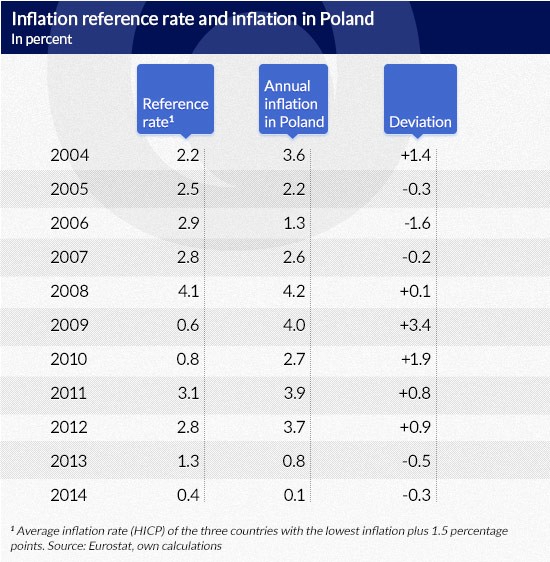 The volatility of inflation in Poland means that monetary policy needs to be more restrictive than in Western Europe if we want to keep it at a level consistent with the convergence criteria.

In February 2015, the rate of inflation in Poland was among the lowest in Europe. It was negative and amounted to -1.3% in relation to February 2014 (-1.2% in March), while the average inflation for the last 12 months was 0.2%. Lower average inflation for the last 12 months was recorded in Bulgaria, Greece, Spain and Hungary. Taking into account the reference inflation calculated on the basis of data from Spain, Hungary and Poland and rejecting data from Bulgaria and Greece, where deflation deviated significantly from the EU average, Poland currently fulfils the inflation criterion. In February, inflation was lower than the reference rate by 1.4 percentage points. According to European Commission forecasts, inflation in Poland will remain at a level lower than the reference inflation until the end of 2016.

In February 2015, the 10-year bond yield in the euro area reached 1.05% and in March it fell to 0.95%. In February the yield was lower than 1% in 11 countries. The lowest yield of 0.20% was recorded in Denmark, a country which does not belong to the euro area. The Danish krone has been in the ERM II for a number of years and its exchange rate is virtually pegged to  the euro at 13.400 Danish kroner for 1 Euro. In the last five years, the lowest exchange rate of the krone was 13.447 and the highest was 13.372, which means that fluctuations were no greater than +/- 0.25%. 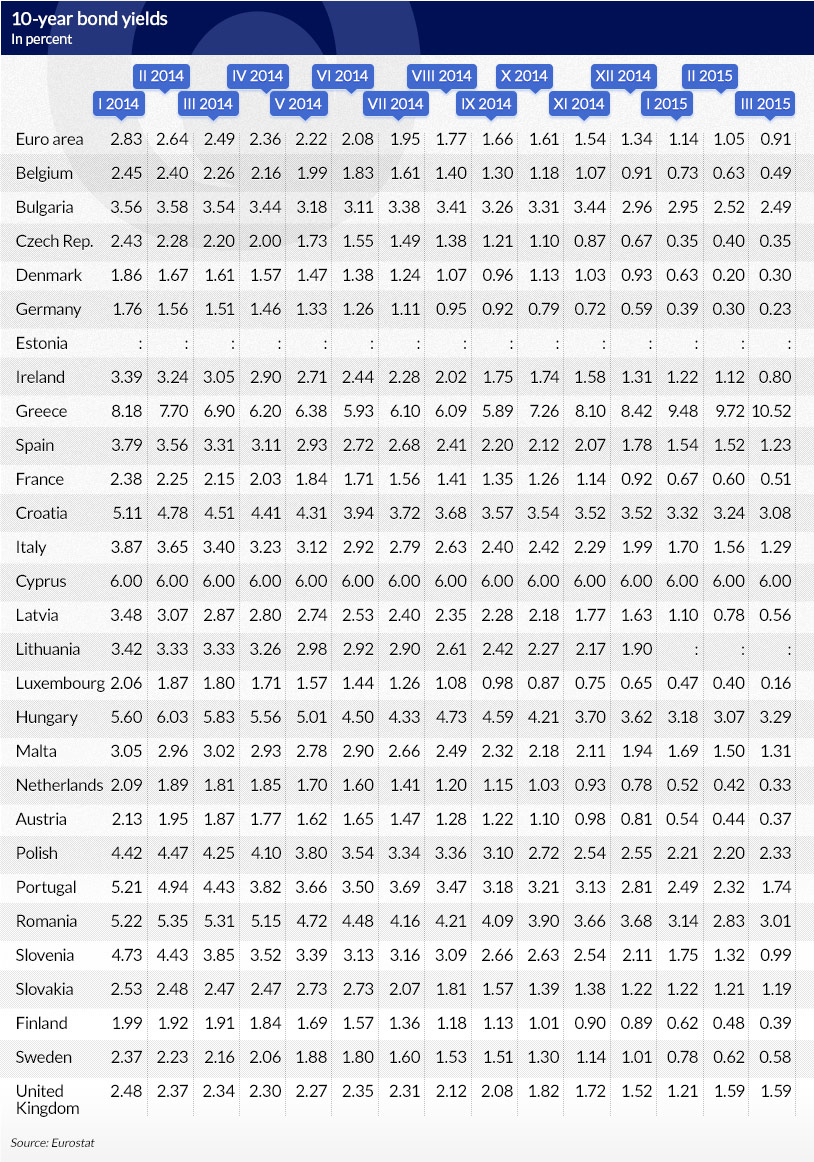 Poland does not participate in the ERM II and will not join it, as it has – for political reasons – no chance of a adopting the euro soon. The exchange rate criterion is the most difficult for Poland to meet, as joining the ERM II is associated with risk. Currency stabilization would require defending the exchange rate through interest rate changes implemented more frequently than those currently carried out by the Monetary Policy Council as well as currency interventions. There is a risk that the złoty would come under pressure of a speculative attack, especially in the event of extraordinary developments in emerging markets. This has happened several times in recent years. The crises in Turkey, Hungary and Ukraine have all led to a fall in the exchange rate of the złoty.

In the last 12 months, the average exchange rate of the złoty against the euro in NBP was the lowest on 24 December 2014, at 4.306 PLN for 1 euro, and the highest on 21 April 2015, at 3.9822 PLN for 1 euro. The difference between the minimum and maximum exchange rate over a period of several months was therefore as much as 8%.

Much bigger fluctuations occurred between July 2008 and April 2009, when the złoty lost more than 30 percent of its value against the euro. At that time it was one of the factors supporting the growth in exports and the maintenance of positive GDP growth.

Entry into the ERM II will require negotiating the band of the acceptable fluctuations of the exchange rate and the central rate with the European Commission and the European Central Bank. Poland would presumably prefer a band of +/- 15%, but it is not certain whether the EU authorities would accept that. A low exchange rate of the złoty would be more beneficial for our economy in the short term, although it would be associated with a greater risk of inflation following accession to the euro area.

Poland has been placed under the excessive deficit procedure (EDP), which means that it does not fulfil the fiscal criterion. Poland has no problems with the general and local government debt, which fell to below 50% after the partial liquidation of the open pension funds. However, the deficit of that sector in the previous year exceeded 3%. According to the estimates of the European Commission, it amounted to 3.6%, whereas according to data from the Central Statistical Office (GUS) of 16 April 2015, it was lower, standing at 3.2%. The European Commission forecasts that in the current year the deficit will drop to 2.9%, while in 2016 it will sink further to 2.7%. This would allow for the excessive debt procedure applied to Poland to be removed.

It should be noted, however, that Poland is currently in a phase of economic recovery and is one of the fastest growing economies in the European Union. Consequently, it should have a lower deficit. Estimates of Poland’s growth presented by the European Commission are slightly understated and so the evaluation of the structural deficit. The European Commission also overstates the potential GDP growth in Poland, as it takes into consideration data from the years 1996-2013.

The average growth rate in the coming decades will most likely be lower than in the previous ones. In other words, the current growth of the Polish economy, nearing 4 percent, is higher than the potential growth. Thus the structural deficit is higher than the actual deficit.

According to the European Commission, the structural deficit in Poland reached -3.0% of GDP last year and this year it will reach -2.7% of GDP. This is a high figure compared to the European Union average. According to the Fiscal Pact signed by Poland (as well as other agreements on the stability of public finances), the structural deficit should not exceed 1% of GDP.

In 2014, Poland ranked fifth in the European Union in terms of the size of the structural deficit. According to the European Commission’s forecasts, it will also rank fifth in the current year and will slip into eighth place the next year.

However, reality may turn out to be worse than the forecasts, because in the next few years more funds from the EU’s budget perspectives for the years 2014-2020 will begin to pour into Poland. This will increase the tensions in the budget and could delay the date when from the excessive deficit procedure in relation to Poland is removed. 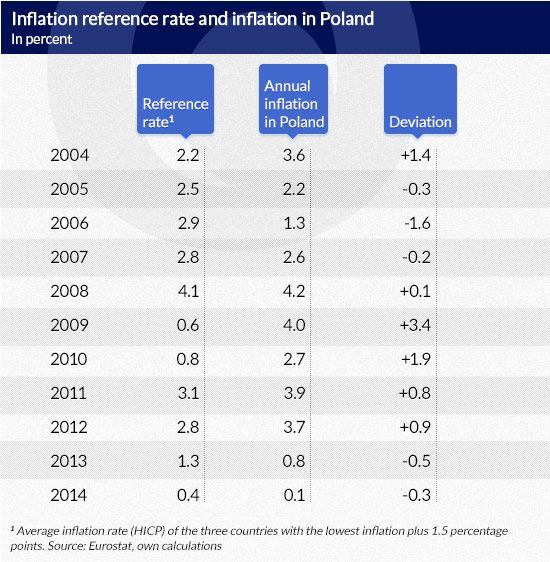