26.02.2015
Over a year ago the US Senate accepted a project for amnesty of illegal US residents as well as new rules for new immigrants. First, however, work on the project was suspended, and now, because of the Republican majority, the idea to deport as many as 11m people has returned.

In the previous term of Congress, the Republicans, then a minority, declared their support for an immigration reform bill called S.744, but at the same time, through inaction they let the draft bill which was to legalise the stay of at least some illegal immigrants expire. The white gloves have been thrown away in the present Congress. With a majority in both houses, the Republicans have openly started a discussion about deportating illegal immigrants.

To enable the deportations, the Republicans need (and want) to cancel all of President Barack Obama’s proposals, which were aimed at legalising residence of, for example, those who were educated in the United States (the so-called DREAM-ers, from Development, Relief and Education for Alien Minors Act), as well as changing the policy of the Department of Homeland Security, which so far has only deported illegal immigrants who committed serious crimes. According to the new plans of the Republican majority, being illegally present in the United States is to be a sufficient condition for deportation.

They contribute more than they cost

Immigration is one of the problems most deeply dividing Americans, mainly for economic reasons. Historical analysis shows that immigrants clearly fuel the United States. The inflow of talent, people determined to achieve financial success, willing to work and often to start their own business – these are the flagship arguments for the open door. The sheer number of incoming people also translates into an increase in the size of the economy and its profits. However, not right away. First, society must bear the cost of receiving the “newcomers”. These two dimensions of immigration cost and the calculation of benefits is based on two different methods.

The first is a static method and takes into account only the current circumstances (or a historical period), without taking into account future changes, e.g. in education or income. It does not anticipate how immigrants will change the financial reality of the federal coffers and those of individual states (it also does not take into account any cyclicality of tax revenues and expenditures, but is based on  current budget deficits and surpluses). Meanwhile, how immigrants affect future taxes and spending is more interesting . Such a prediction is made possible by “active” methods of calculation. The static method provides arguments for opponents of immigration and amnesty, the dynamic methods show the reasons for opening the door.

In its report, the right-wing Heritage Foundation lists the four main areas in which the American taxpayer „maintains” immigrants. These are:

* education (the cost of educating a  student in a public school is about $12,300 a year), and for children of low-income parents, such as immigrants, it is either entirely or largely financed by the federal or state governments,

* state services and care in the form of the police, fire service, transportation infrastructure etc. (as calculated by the National Science Academy quoted by the foundation, spending on these has to be increased when new immigrants join a community).

The average value of benefits and services received in 2010 by one immigrant household,  paid for by American taxpayers, amounted to $31,584.

Heritage authors point out that the vast majority of immigrants do not have education beyond primary education, yet in 2010 households run by people without a high school diploma received aid valued at an average of $46,582 annually, paying only $11,469 in taxes. Thus, the deficit came to $35,113.

The argument for opening the door wider for immigrants is as follows: who will replace the boomers when their generation, which today accounts for about 25% of American society, retires in the coming years or finds jobs appropriate for their age?

Using different methods, economists from politically independent institutes, such as the Congressional Budget Office, the Census Bureau and Bipartisan Policy Center, a think tank,  calculated that immigrants increase the supply side of the economy through a direct increase in labour supply. This raises greater tax revenues for state coffers, but does not particularly burden aid programmes.

In 2013, the Congressional Budget Office carried out a cost-benefit analysis of the S.744 project using both methods. In the static model (assuming no change in education, lack of career advancement of immigrants etc.) the introduction of an amnesty would lead to a public deficit reduction within 20 years (by 2033) of $875bn. An analysis using a more dynamic CGE model (computable general equilibrium) pointed out that at the same time, GDP would increase by 5.1– 5.7%, because of the increase in the workforce. More workers would raise the productivity index, which would stimulate investment growth. This increase would reduce the federal deficit by $1,197bn, i.e. by $300bn more than under the static model.

The Bipartisan Policy Center, following the example of the CBO and using dynamic models, calculated that the proposed amnesty for 11m people would reduce the federal deficit by $180bn within the first 10 years, and by another $990bn within the following decade. The labour force would increase during this time by 8.3m, i.e. 4.4%.

Rarely at the doctor’s office

The legal status and the laws governing access to means-tested benefit programmes exclude illegal immigrants. The only benefit they enjoy is Emergency Medicaid, which is relatively small. Legal immigrants also use state-paid health care far less often than those born in the United States. They go to the doctor’s office two or three times less often; therefore, they are not currently a burden for taxpayers. According to studies by the Congressional Budget Office and the Census Bureau, they bring a positive contribution to the two basic aid programmes – Social Security and Medicare. In the years 2002-2009, contributions from immigrants amounted to 14.7% of the entire Medicare fund. However, they consumed only 7.9% of all expenses, thus adding an average of $13.8bn net per year to the programme. At the same time, people born in the United States generated an average annual deficit of $30.9bn.

On the other hand, the contribution to the Social Security pension system varies. According to some studies, immigrant men pay 76% of what men born in the USA pay before reaching retirement and get 83% of the benefits of the latter. In the case of women, these values are 78% and 80% (immigrant women vs. women born in the US).

There is no evidence that immigrants choose to settle in states where social care is more generous. The selection criterion is rather the economic growth rate of the state and demand for labour. In the places they settle, migrants increase the demand side of the economy, e.g. in the housing market: renting, secondary and, to a lesser extent, primary market, as well as in the construction industry.

According to a 2007 study by Albert Saiz,  director of the urban programme at the Massachusetts Institute of Technology (MIT), under stable conditions 1% population growth in a given area results in a 1% increase in rent prices. But when such an increase is sudden and unexpected, prices rise by 3.75%. Economist Jacob Vigdor of Duke University calculated that given the 40m legal immigrants living in the US in 2011 and the fact that each of them adds more than  11 cents to the value of dwellings in his or her local community, it raises the value of tax on housing throughout the United States by approximately $3.7 trn. According to an analysis by the Bipartisan Policy Center, the adoption of the amnesty regulation would stimulate the demand for housing construction, and the average expenditure on construction would increase within 20 years by about $68bn.

Democratic think tanks fully support the amnesty. On a website devoted to immigration, the Center for American Progress shows a clock with an increasing sum that the Treasury is losing in uncollected taxes by not adopting the amnesty. They estimate it is $37m a day.

In then summer of 2014, immigration was considered more serious than other problems of the country. In a survey by the Gallup Organisation in January this year , only 3% of respondents indicated the problem of immigration as the most serious one, in July it was already 17%. This is a result of the crisis with children from South America who arrive at the border with nobody to take care of them. To solve this problem, President Barack Obama demanded $3.7bn from Congress.

The 17% figure is unique, but according to Gallup, 16-20% of Americans express  dissatisfaction with government policies and legislators every month.

It is nothing but business for Canada

Meanwhile, Canada has been implementing immigration reform for several years. From 1967 until recently, the Canadian system had three major criteria for granting the right to stay and to apply for Canadian citizenship – education, fluency in English or French and professional experience, and ignored race and country of origin. These criteria led to a situation where  the dominant group of immigrants in the past half-century are Asians. At the same time, however, many of those who were admitted did not find jobs (due to peculiar names or diplomas from non-European countries) despite their education and experience.

Since 2006, Canadians have admitted more and more people who were offered jobs by Canadian companies. On 1 January 2015, this system gained an advantage in the form of the so-called express paths for people with such an offer. The problem is that the pro-state criteria, i.e. talent, education, and experience, gave way to low wages for which Canadian employers want to hire immigrants. The Canadian Government introduced a point-based system which is to balance the criteria, and if talent, education and experience coincide with a gap in the supply of domestic labour and the candidate is 20-30 years old, then he or she has a chance to obtain the right of permanent residence more quickly. As acknowledged in the British magazine “The Economist” by Canadian Minister of Citizenship and Immigration Chris Alexander, on average, Canadian immigrants have higher education diplomas more often than the original population of Canada. Canada admits the best and those best matching the requirements, and the increase in the limit of admitted immigrants has in no way met with opposition from the public.

Category: Macroeconomics 29.01.2020
Climate change was one of the major topics during this year World Economic Forum in Davos with Greta Thunberg on one side and the US President Donald Trump on the other. Meanwhile, the IMF says a slowdown in global economy is unavoidable. 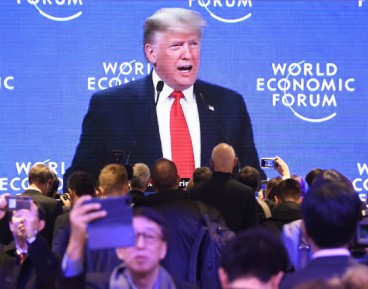