Ukrainian migrants are not only a cheap labor

Thousands of Ukrainians who have already come to Poland in search of work, and potentially several million people waiting in line, are not only cheap and unskilled workers. Educated and enterprising people are increasingly willing to emigrate as well.

Ukraine is increasingly growing not thanks to the development of the economy, but thanks to the billions of dollars in remittances coming from economic migrants. Foreign exchange inflows from them are already several times higher than the credit tranches from the IMF.

An important part of GDP

Ukraine is ranked 29th on the list of countries with the highest participation of economic emigration in GDP. According to the data of the State Statistics Service of Ukraine, the participation of economic migrants in Ukrainian GDP reached 6.45 per cent in 2015. This is almost as much as the construction and mining industry combined, and more than twice the value of the insurance and financial sector.

The increase in remittances from expatriates as a share of GDP is, on the one hand, the effect of the drastic decrease of Ukraine’s GDP denominated in USD –  it shrank as a result of the huge devaluation of the hryvnia and the crisis of the economy. It decreased from USD180bn in 2013 to USD80bn in 2015. On the other hand, it is the result of the gigantic scale of economic migration. In the last two years, 5 million people have left Ukraine for work.

Aleksey Kush from the Association of Ukrainian Banks assessed that  this year economic migrants may transfer up to USD 7.5 billion to Ukraine. According to the data of the International Organization for Migration (IMO), the main countries from which Ukrainian expatriates sent remittances in 2014 were Russia, which accounted for 30 per cent of the total amount, Poland (21 per cent), Italy (11 per cent) and the Czech Republic (15 per cent).

According to the IMO, official statistics only capture 60 per cent of the total amount of remittances from economic migrants. And this means that they could have reached up to USD6.3bn in the first half of this year.

However, such a situation will not last forever – economic migrants who have put down roots abroad are slowly beginning to bring over their families that still remain in Ukraine, thus will eventually stop transferring the money earned abroad.

According to this year’s IMO report report on the Ukrainian migration, the attractiveness of Russia, as the target of economic migration of Ukrainians, is decreasing with each year, while the attractiveness of Poland is increasing (more here). In 2013, the number of Ukrainians leaving for Poland surpassed the number leaving for Russia. This happened in spite of the fact that in order to enter Poland, Ukrainians have to obtain a visa, whereas Ukraine enjoys visa-free travel with Russia. 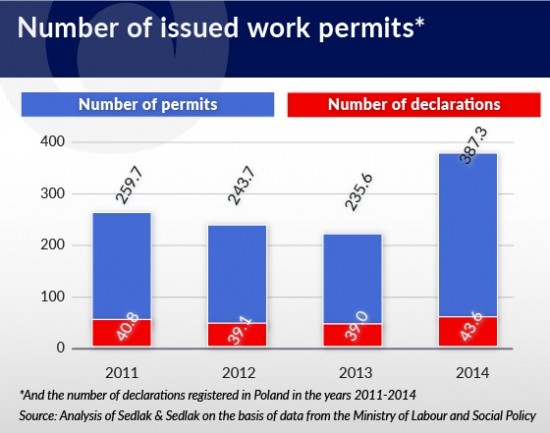 Poland is now the main destination country for long-term Ukrainian economic migration. Russia is still main competitor when it comes to short-term migration, but Poland will probably soon take the lead in that category as well.

“When we examine the short-term perspective, it becomes obvious that the attractiveness of the Russian Federation as the destination country for short-term economic migrants will decrease from the current figure of 47 per cent to 12 per cent over the next 12 months. At the same time, Poland and the Czech Republic will become much more attractive (32 per cent and 19 per cent, respectively),” assess the authors of IOM’s report.

While at the moment the vast majority of long-term migrants coming to Poland are the inhabitants of the western regions of Ukraine, according to the IMO this structure may change. In Ukraine, there are currently 1.6 million refugees from the Russian-occupied Crimea and the war-torn areas of the Donbass. Some of them will be looking for opportunities to work abroad.

It’s time to update our views

According to the traditional Polish approach, economic migration from Ukraine is viewed from the perspective of a source of cheap unskilled workers, ready to work for low wages and perform simple manual jobs which are avoided by Polish workers. Meanwhile this vision leaves out the most promising piece of the “immigration pie”: Ukraine is currently a huge reservoir of intellectual potential and capital.

“Ukraine is starting to implement the model of a country of pensioners, in which the economically active part of the population leaves the country, and citizens at the pre-retirement and retirement age remain,” says Aleksey Kush.

According to experts, Ukraine is in for an even greater wave of migration and an outflow of the most qualified workers, who simply cannot achieve their professional ambitions in an oligarchic country. The middle class, pushed out of the increasingly oligarch-dominated Ukrainian internal market, is also joining the group of potential migrants.

According to the analyses of the industry portal HeadHunter, 68 per cent of Ukrainian senior managers are ready to leave the country. This is as much as 14 percentage points higher than in 2014.

“In the past two years the central government in Ukraine has been completely revamped – a new President, a new Parliament, a new Council of Ministers. But nothing has changed in the state’s attitude towards business. In the absence of the much-hyped reforms and amid growing administrative pressure on business, entrepreneurs are packing their bags and leaving the country. While the first mass wave of emigration from Ukraine in the 1990s was impressive due to the sheer numbers of people migrating, today’s exodus exceeds it in terms of quality. Great minds and fat wallets are leaving the country,” this is how the Ukrainian reality was described by the business portal Capital in a report devoted to economic emigration from Ukraine.

According to a survey published in October, about 40 per cent of Ukrainians want to look for work abroad, and 30 per cent are ready to leave the country forever. Most of the potential economic migrants are people with a higher level of education and income.

The number of such potential workers will increase even further. According to the data published by the State Employment Service of Ukraine, registered unemployment has now reached almost 10 per cent. In reality it is even higher, because some of the companies sent their employees on unpaid leave or moved them to a part-time employment.

The biggest number of such people earning paltry salaries (as much as 14 per cent of the total number of employees) can be found in the industrial regions – the Zaporozhye Oblast and in the part of the Donbass controlled by Kiev, with the average for the whole of Ukraine at 5.5 per cent.

In addition, a quarter of a million Ukrainians have already received news of planned redundancies from their employers. According to the data of the State Employment Service, 60 per cent of them are professionals employed in the budget sector, such as teachers and doctors.

A few years ago Latvia set an example of how the potential of the Ukrainian economic emigration could be utilized by launching a program to promote the immigration of people with capital and qualifications. Ukrainian entrepreneurs can obtain a residence permit there within a few weeks. 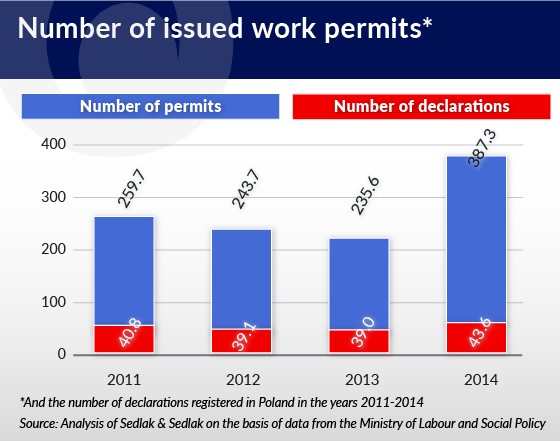