03.01.2013
Americans are terrified when looking at  the rapidly growing debt resulting from student loans. The situation is further complicated by the increase in unemployment. In order to repay their loans, over one third of graduates take on jobs that do not require university-level education. The enterprising and capable students tend to leave school before graduation. 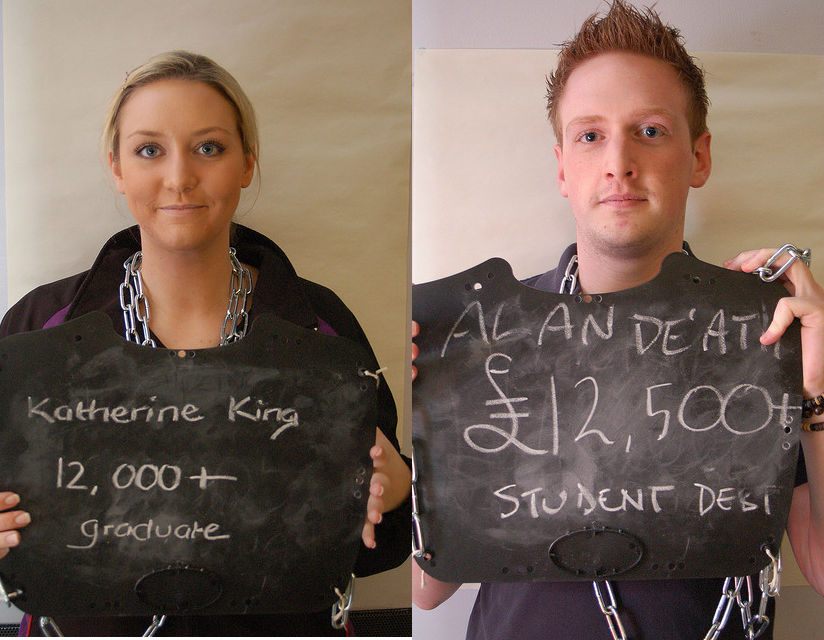 Every year, thousands of American families are faced with a difficult decision: the choice of college or university for their children. They need to decide whether to choose a acclaimed, and usually more expensive university, whose graduates are more likely to find a good job, or a less prestigious school, where the fees may be lower, but chances of finding a good job are not the same.

Both young people and their parents try to find out which universities and colleges offer scholarships, how much money is offered to students, and determine the chances of being granted a scholarship. They also check the percentage of loans taken out by students of a given institution were repaid on time, as this figure gives an idea about the likelihood of finding a job by graduates.

Those who have family in Europe, for example, consider studying on the Continent, as the cost of higher education in many European countries is lower than in the United States.

The decision is significant, because it may determine not only the future of a young person, but also the burden  of debt incurred to finance his/her studies, which will be carried over to his/her adult life. That debt will also impact their future creditworthiness.

According to the calculations made with the use of a special CNN Money calculator, a year of studying at Columbia University in New York City costs around USD 51,700; USD 41,600 for tuition fees and the remaining sum to cover the cost of living and textbooks. A student that comes from a family with an annual income between USD 75,000 and 110,000 and who has been granted a scholarship will need to spend USD 24,500 for the first year of his/her studies. In the case of Harvard University, it is USD 52,700, 36,000 and 10,600 respectively.

About two-thirds (data for 2011) of graduates of American colleges and universities have taken student loans. When they started their studies, the economic situation was much better than at the moment. The unemployment rate was 4.7 per cent, whereas upon their graduation, in the middle of 2011, the unemployment rate was twice as high and reached 9.1 per cent.

The data collected by the Institute for College Access and Success indicate that unemployment among university graduates is even slightly higher than the national average. Moreover, as many as 37.8 per cent of 2011 graduates are working in positions that do not require university-level education. In addition, average salary of graduates continue to plummet. Citigroup calculated that since 2000, the average salary of people aged 25-34, who have completed four years of university education, decreased by almost 15 per cent.

According to a quarterly statement published by the Federal Reserve Bank of New York, the share of non-performing student loans (that is those that have not been reimbursed for a period of 90 days or longer) increased by 2 percentage points to reach 11 per cent of their total value between July and September 2012. As noted by the Fed, the rate would be twice as high if only loans that are in the process of repayment were taken into account in the calculation.

In the opinion of people responsible for credit risk in American financial institutions, the rate of non-performing student loans will increase in the coming quarters. The level of debt resulting from these loans is also expected to rise. In the third quarter of 2012, it grew by USD 42 billion, and since the end of 2003 – by about USD 700 billion.

Studying in the United States has never been cheap. However, in recent years, its cost has increased significantly. Since 2000, the average cost of tuition and other fees borne over a period of four years of university education have increased by over 70 per cent. The increase of education costs is significantly higher than the accumulated rate of inflation. Moreover, the rate of government interest on student loans increased dramatically in 2012 – from 3.4 per cent to 6.8 per cent.

In practice, one in five American households is in debt due to student loans. In the households of persons aged under 35, this ratio reaches  40 per cent. Student loans are paid back not only by graduates in their 20s or 30s. As much as two thirds of the total value of student loans is being paid off by persons over 40; even a number of 60-year olds are in debt due to student loans. The majority of them are parents, and sometimes grandparents and great-grandparents of former students who have taken over – often as guarantors – part of their descendants’ financial commitments.

One’s own business instead of debt

Given the high cost of higher education, more and more young and talented Americans decide not to go to college or to leave university. They believe that starting  adult life with a debt of USD 200,000 is too risky and that instead of studying for four years, it is better to use that time to develop their own business.

There is no shortage of role models in this respect. Steve Jobs, the late charismatic founder and CEO of Apple said that abandoning his studies at Reed College in Portland (tuition fees – USD 42,000 per year) was one of the best decisions he had made ​​in his life. Similar decisions were taken by Mark Zuckerberg, co-founder and CEO of Facebook, and Bill Gates, co-founder and former CEO of Microsoft. Both abandoned their studies at Harvard (tuition – USD 36,300).  Michael Dell, founder and CEO of Dell, also gave up from his studies at the University of Texas in Austin (tuition fees – USD 9,800 for the inhabitants of the state of Texas and 32,500 for other students).

Among the co-owners of new and thriving companies that were recently established in the United States, a large number either left university before graduation or never started their studies in the first place. Just as Zuckerberg, Kevin Rose, founder of Digg, and Evan Williams, who founded Twitter also abandoned their studies.

David Karp, aged 26, who launched the blog service Tumblr in 2007, never went to university; moreover, he completed his high-school education through home-based learning. In 2010, „Technology Review” magazine published by the prestigious Massachusetts Institute of Technology listed Karp among the top 35 young innovators in the world.

Those who abandon their studies to start their own businesses can count on the support of entrepreneurs who have already made millions. The most famous project supporting the decisions of students aged under 20 is the Thiel Fellowship programme created in 2010 by Peter Thiel, co-founder of PayPal – payment processing company offering online money transfer services. Every year, between 20 and 30 people are selected among those who have submitted their application awarded USD 100,000 to develop their own business.

– In the Silicon Valley, the decision to abandon one’s studies is almost considered to be a matter of honour – said Mike Hagen in an interview for „The New York Times”; in 2006, Hagen interrupted his studies at Princeton University (tuition fees – USD 37,000) and moved to San Francisco, where he is currently co-creating Undrip – a social networking application.