A boost for research and development

The situation of support for research and development activities in Poland was so bad that it could only change for the better.

The current tax incentives are not attractive, the amendments in the law prepared by the government are still not enough but even these minor changes will be good for Poland.

In January 2016, a new act on the support of innovative activities and new tax credits for research and development entered into force. Entrepreneurs can now deduct 10-30 per cent of the eligible costs of R&D activities, even for projects launched previously and which turned out to be unsuccessful.

At the beginning of the year, the government announced changes. The draft of the so-called small act on innovation presented in March by the Ministry of Science and Higher Education abolishes the taxation of in-kind contributions in the form of commercialized intellectual property, including the proprietary copyrights to a computer program, and provides for a super tax-break – the possibility for small and medium-sized companies to deduct up to 50 per cent of the total eligible costs incurred on R&D activities, and for large companies to deduct up to 50 per cent of the personnel costs and up to 30 per cent of other costs related to R&D. There was also a proposal to extend the period in which entrepreneurs can deduct these costs from three to six years.

The program is supposed to come into force on January 1st, 2017. The Ministry of Science emphasizes that the tax breaks in Poland will be higher than those in the Netherlands, where they amount to 32 per cent. This is true but in the Czech Republic they reach up to 110 per cent, in the UK up to 130 per cent, and in Hungary up to 200 per cent.

For the time being Poland is trailing behind

The act, which has already been in force from the beginning of the year, will greatly improve Poland’s position in the R&D rankings which was rather poor until now, to say the least. In the Global Innovation Index 2015 Poland was ranked 46th among 141 countries. In the Innovation Union Scoreboard 2015 Poland is ranked 24th – the fourth from the bottom. In a summary http://www.oecd.org/sti/rd-tax-incentive-indicators.htm comparing R&D tax incentives Poland achieved indicators of zero in all categories. While in some countries the indicator was negative, Poland still found itself almost at the bottom of the list. Profitable small and medium-sized companies can gain the most in France, Portugal and Spain, whereas large profitable companies can gain the most in Spain, Portugal and Ireland.

Some countries allow the use of tax incentives, even if the companies are not profitable enough in order to use them in the current period, e.g. through refunds. Few do that to a substantial extent, however. In Austria and Norway, refunds from the authorities allow companies to benefit from tax incentives as if they were profitable. Such facilitations usually mostly benefit SMEs and young companies – this is the case in Australia, Canada and France.

A trend for changes

The positive changes that have occurred in this area in 2016 were already predicted by the Deloitte report “The Global Survey of R&D Incentives” in December 2015. Poland was listed in the group of countries planning to introduce legislation that will have an impact on the support of R&D activities. The latest edition of the report which has been published for several years now, shows that most of the 34 OECD countries offer preferential taxes for expenditure on R&D.

These include tax deductions, relief and credits, as well as accelerated depreciation of capital expenditure on R&D. Some countries offer solutions in which the profit from the intellectual property resulting from research and development activities is taxed at lower rates. In addition, all the OECD countries offer research grants, loans and other financial incentives.

The authors of the report admit that many countries have changed their policy since the previous study (March 2014). There is no single trend of cutting or increasing incentives for R&D activities. Several countries increased certain incentives while reducing others. Many governments are still looking for the right proportion of incentives to increase research and development activities.

The majority of countries examined by Deloitte increased their incentives. These countries include the following:

Three countries – Australia, Japan and the United Kingdom – have reduced the tax incentives from March 2014. Several countries have introduced more transparent rules. In Brazil, the Ministry of Science, Technology and Innovation updated the system for the submission of electronic applications in 2014. The Italian government has clarified the requirements for companies that can apply for a 35 per cent tax credit when employing researchers. In 2015, Latvia and Romania published a list of activities where tax relief is applied. Facilitations for taxpayers were introduced in the United States.

The fourth group of countries are the states that have proposals which could affect the system of tax incentives in the future. In some cases this could be negatively, in others positively. Australia had plans to reduce the tax credit to 43.5 per cent for SMEs (from 45 per cent) and to 38.5 per cent for other companies (from 40 per cent) starting from July 1st, 2014. In Greece, the government provided for a change in the definition of expenditure eligible for tax exemptions. In the Netherlands, changes were planned for 2016. South Korea announced a reduction of tax credits from 3 per cent to 1 per cent for large companies and from 5 per cent to 3 per cent for SMEs starting from January 1st, 2016. Spain was planning to make some changes starting from July 1st, 2016, which, among others, included removal of the requirement for the company to participate in the intangible assets at the amount of at least 25 per cent.

The USA were to extend the exemptions in force until the end of 2014, which is nothing new: the exemptions have already been extended 17 times since 1981, when they first entered into force.

In search of money

Tax exemptions are not the only thing deciding the location of R&D activities in a given country. Access to EU grants is equally important – that is the conclusion of the 2016 Global R&D Funding Forecast https://www.iriweb.org/sites/default/files/2016GlobalR%26DFundingForecast_2.pdf  published at the beginning of the year. The forecast is prepared by the Industrial Research Institute (IRI) which brings together 200 major research and development organizations and many American laboratories, and the “R&D Magazine” portal. Perhaps that is why in this study, Poland was listed among the countries in Europe which are attractive locations for research centers. 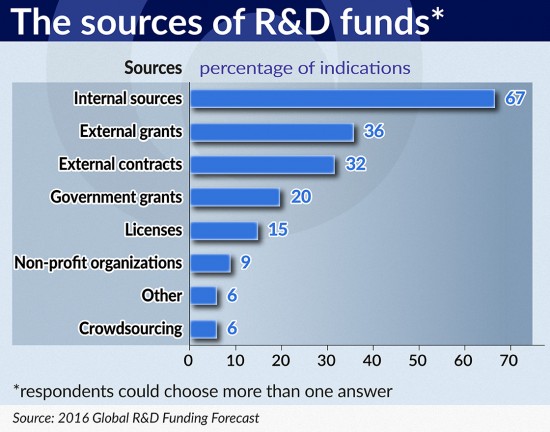 Germany is leading because of its strong economy: GDP (which is expected to reach USD3.7 trillion in 2016), R&D, industrial R&D and industrial production, as well as a large number of publications and patents. The global leader, however, is the United States. Although each country has its own strong areas in R&D, the USA wins in most of them: advanced materials (59 per cent of world expenditure on R&D), agriculture and food (68 per cent), civil aviation (62 per cent), communications (57 per cent), energy (49 per cent), environmental protection (37 per cent), instrumentation (41 per cent), life science and health care (43 per cent), defence (78 per cent), as well as pharmacy and biotechnology (56 per cent).

Only in expenditure on research and development in the automotive industry, is first place taken by Japan (32 per cent), followed by Germany (29 per cent) – in this country research is carried out by Volkswagen (the company is the first in the world in terms of spending on R&D, although – as shown by the diesel gate – expenditure does not always equate with quality), Daimler and BMW, which are among the top ten technology-based companies.

Expenditure going up, shares going down

Although, according to forecasts, Europe’s global share of expenditure on R&D is supposed to fall to 21 per cent in 2016 (from 21.5 per cent in 2014), this is due to faster growth in Asia. 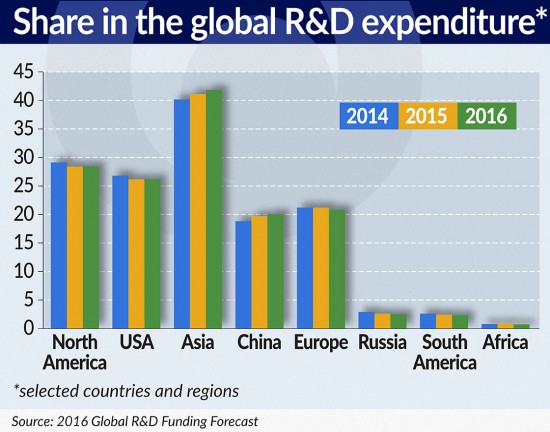 In reality, the expenditure in Europe increased by 3.6 per cent in 2015, and this year it is supposed to increase by 1.9 per cent. Three of the 10 world leaders in research expenditure are members of the EU: Germany, France and the United Kingdom, which are to allocate, respectively, USD109.25bn, USD60.05bn and USD45.54bn for that purpose. The report predicts that global spending on R&D activity will increase by 3.5 per cent, up to USD 1.9 trillion. Let’s hope that it is also higher in Poland, because 0.9 per cent of GDP is not enough. 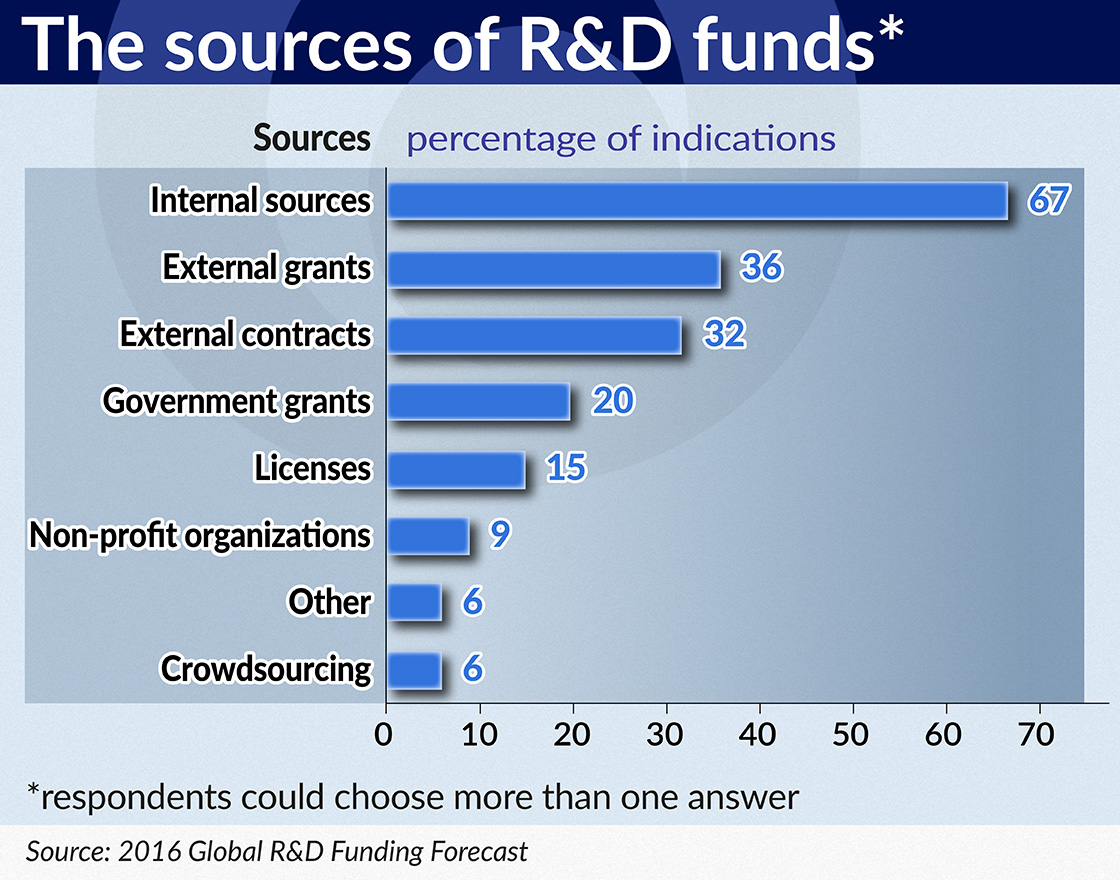 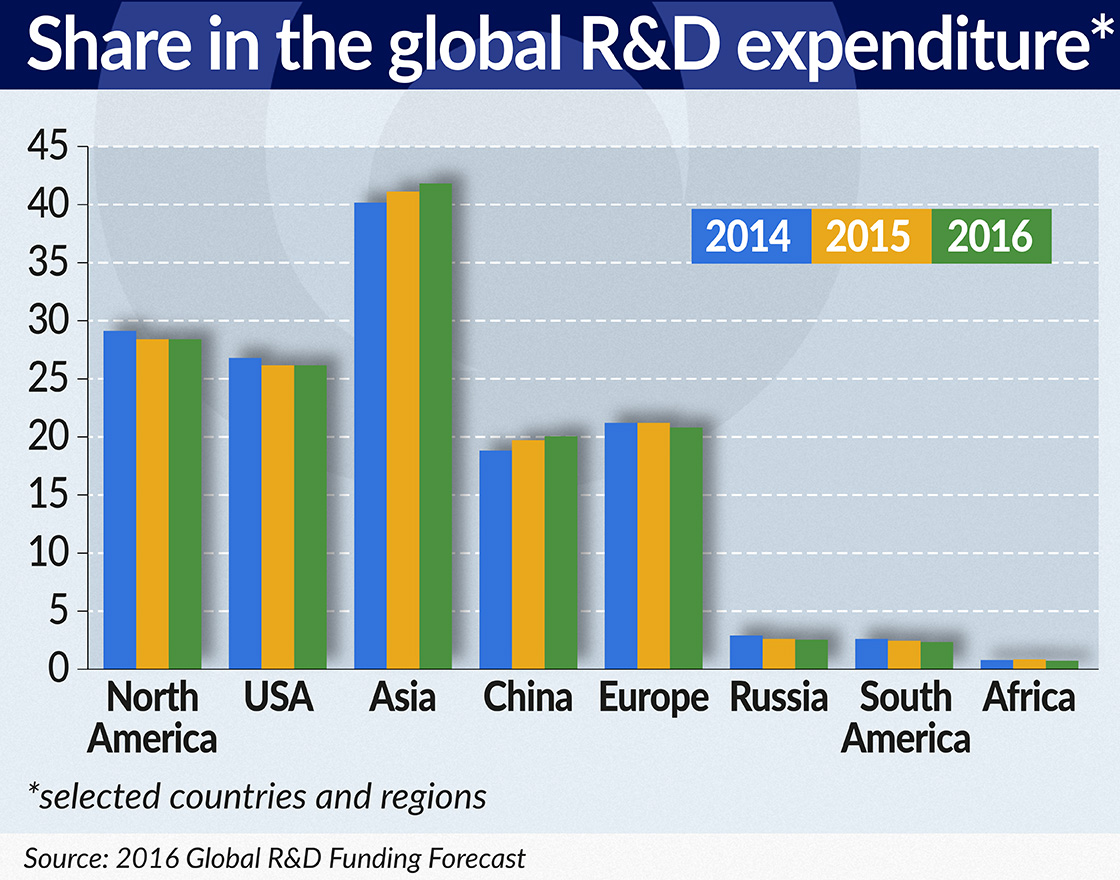