24.02.2020
By 2040, Europe’s air traffic is expected to grow by nearly 50 per cent, according to conservative estimates. Most of that growth will be driven by the booming aviation markets in Central and Southeast Europe. Only the Polish aviation hub has started preparations to meet the demand for flying. 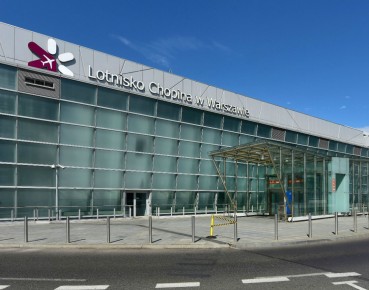 According to the latest report published by the European Organization for the Safety of Air Navigation (EUROCONTROL), European airports will have to handle 16.2 million flights by 2040, a 53 per cent increase from 2017. That is a more conservative estimate, the so called “regulation and growth scenario”, taking into account the growing global sustainability concerns and only moderate economic growth.

The more sanguine scenario, based on the assumption of a strong economic growth and early adoption of technologies to mitigate the effects of sustainability challenges, foresees an 84 per cent growth in flights to 19.5 million by 2040.

Both projections are based on various factors, such as demographic trends, new routes and destinations, GDP growth, potential of EU enlargement, price of oil, and operating costs. “The traffic growth will be faster in the early years (2018-2030) than in the late years (2030-2040), stronger in Eastern Europe and stronger for flights leaving and arriving Europe than for intra-European flights,” the report reads.

A fast growth in air traffic is no novelty on the global aviation market. Over the period of 1988 to 2008, air traffic in Europe had doubled. The growth was a function of deregulation on the European aviation market, the emergence of low-cost airlines, and the expansion of the EU from 12 to 27 member states.

Due to the economic crises combined with high oil prices, the next period from 2009 to 2017 saw much slower growth rates in European air traffic.

According to a more recent 2019 report published by Boeing, air traffic in Europe will reach an annual growth of 3.6 per cent. This means that, according to Boeing’s estimates, European air traffic will increase by more than 72 per cent by 2038.

It is already clear that many European airports will not be able to satisfy the growing demand for air traffic, putting a cap on growth levels due to infrastructural limitations. According to the Eurocontrol’s report, around 1.5 million flights (accounting for 8 per cent of the demand) will not be accommodated in 2040. Relying on data provided by 111 major European airports, the report says that limited airport’s capacities will be a major factor in slowing the growing demand.

Similarly, the Boeing’s report warns of insufficient capacities of airports around the world to accommodate the growing demand for air traffic. “After nine straight years of above-trend passenger growth, many airports are experiencing pressure on operational capacity. This is particularly acute in high-growth regions, such as Southeast Asia, China, and India and in Western airports where airport expansion is artificially restricted, such as in many parts of Europe,” the report says.

Perhaps nowhere else will the missing capacities of airports be felt as much as in the high growth Central and Southeast Europe. Airports at major regional hubs, such as Warsaw, Prague and Budapest are already nearing their operational capacities. However, there are major differences in the way those airports have been preparing to meet the growing demand. 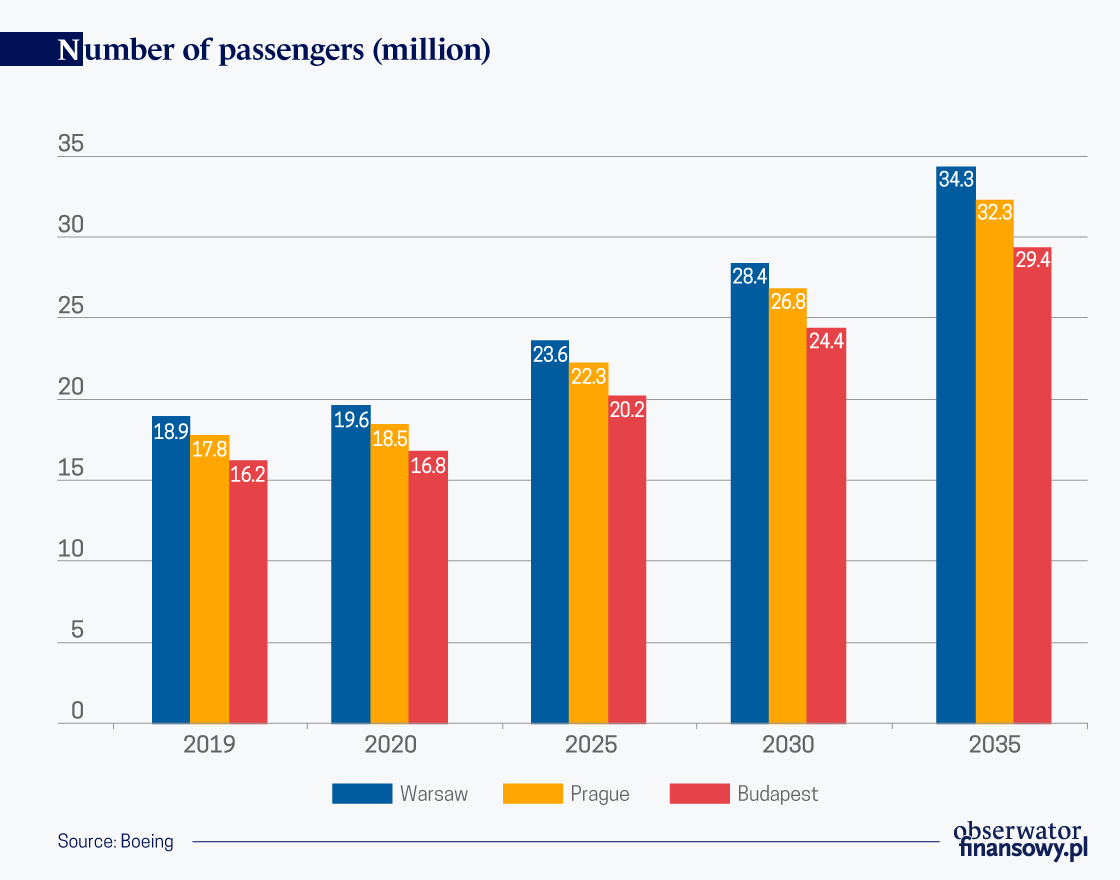 To deal with the influx of passengers, the Czech Ministry of Finance already allocated EUR640m for the enlargement of the second terminal. The projected is to be completed by the end of 2028. There are also plans to construct a new runway, the work on which is expected to commence in 2025. The goal is to be able to service 23 million passengers by 2035.

However, even according to the more conservative Boeing’s estimates, the current plans fall short of the projected increase in passengers. Given the fact that the amount of passengers and taking into account a 3.8 per cent annual increase rate, there is a potential for more than 32 million passenger by 2035.

Since there is no other major international airport in the Czech Republic able to meet the increase in demand, the current plans for enlargement of the Prague airport are grossly insufficient.

The traffic at Budapest Ferenc Liszt International Airport has been growing even faster than air traffic at the Prague airport. Over the last decade, Hungary’s largest airport nearly doubled the amount of passengers from 8.2 million in 2010 to 16. 2 million in 2019. In fact, Budapest airport’s skyrocketing passenger increases have made it the fastest-growing airport in the CSE region, according to Budapest Times https://www.budapesttimes.hu/2019/01/15/new-terminal-among-plans.

To deal with the increasing demand for air traffic in Hungary, the Budapest airport is preparing series of infrastructural investments worth EUR700m, which should be finalized by 2024. Among other things, the plan includes the construction of a brand-new terminal right next to the existing terminal 2. But it’s questionable whether Budapest will be able to service the projected 29 million passengers in 2035.

It is safe to say that Hungary’s largest airport is already in a far better position than Prague to meet the growing demand for air traffic in the region. The German owners of the Budapest airport have shown enough foresight to start investing early on in major developmental projects.

However, it remains to be seen whether those plans will be enough to deal with the nearly 80 per cent projected increase in the amount of passengers at the airport by 2035.

Just like its regional competitors in Budapest and Prague, also Poland’s largest airport, Warsaw’s Chopin International Airport, serviced a record-high amount of passengers last year. Growing by 6. 2 per cent y/y, the airport recorded 18.86 million passengers in 2019. This number makes Warsaw the largest regional airport, at least as far as the amount of serviced passengers is concerned.

To be able to service the projected 34 million passengers in 2035, Poland has embarked on a far more ambitious mission than its regional rivals. Instead of simply extending the capacity of its existing airports, a brand-new airport, Warsaw Solidarity Airport, will be built by 2027.

According to the Simple Flying portal, Poland plans to invest up to EUR9bn in the construction of a new airport with the capacity to service 45 million passengers, and the ability to grow to 100 million in the future. The ultimate goal is, according to the portal, to help LOT Polish Airlines “reach their goal of tripling passenger numbers and developing their long haul services to Asia and the US.”

The plan is to construct a Central European hub that will be able to compete with major European hubs such as Amsterdam, Paris or Frankfurt. Passengers from the region would be able to fly to any major world’s destinations directly from Poland, without the need for a layover in a major western European airport. The new Polish airport will be located around 40 km outside of Warsaw. The decision to build it has been made back in 2017, and was ratified by the government in May 2018.

If the plan for a new airport in Poland finally materializes, it will undoubtedly become the most important aviation hub in CSE, far exceeding both Prague and Budapest in its operational capacity. 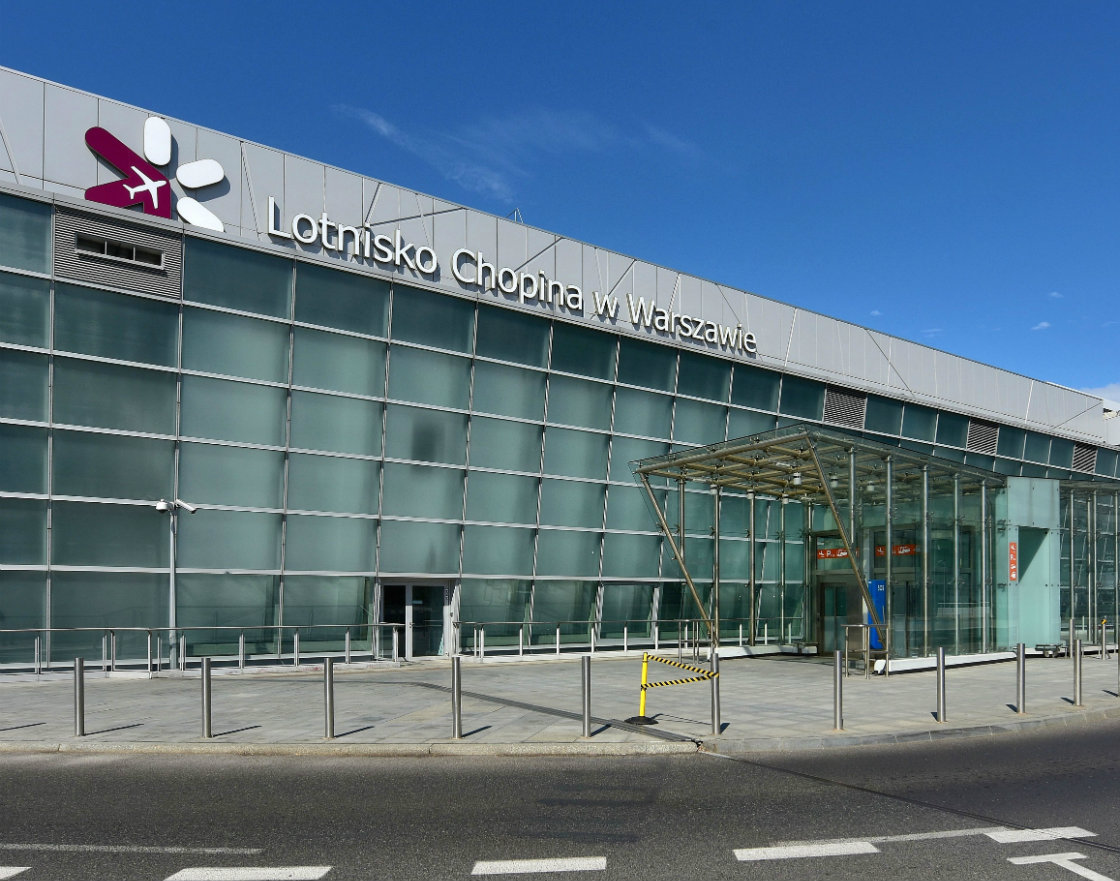 How will we fly after the pandemic?

Category: Business 27.05.2020
All airlines are reporting slashing revenues as global air traffic comes nearly to a halt due to the pandemic. Now as many governments are beginning to slowly roll back the lockdown measures, airliners are preparing themselves for a post-corona environment. 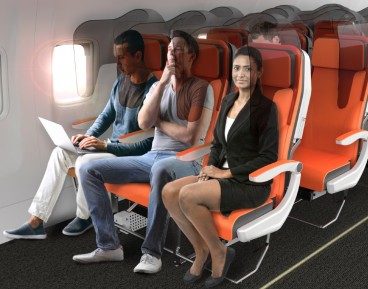