The automotive market has shaken the European economy

The downturn in the automotive market has contributed to a slowdown in the European economy. This is affecting the German car industry and its suppliers, mainly from Central and Southeast Europe (CSE).

In September 2018, there was a sharp decline in the registrations of new passenger cars in Europe. According to the data of the European Automobile Manufacturers’ Association (ACEA — Association des Constructeurs Européens d’Automobiles), almost 340,000 fewer new cars were registered in EU member states y/y. This meant a decrease of 25 per cent compared to September 2017. The Volkswagen group suffered the most, reaching a decrease of registrations of nearly 50 per cent. A decrease in demand for new cars was expected, but its scale was significantly greater than previously predicted. Consequently, its impact on the deterioration of macroeconomic data was bigger.

One of the direct cause lies in the introduction of new emissions standards known as the WLTP (Worldwide Harmonized Light Vehicles Test Procedure). The above regulations are both the result of technological changes and higher requirements for the reduction of CO2 emissions, as well as a consequence of the so-called Dieselgate scandal disclosed in September 2015. The previously applicable standards were developed back in the 1980s.

The negative macroeconomic consequences affected the German economy to the greatest extent, but they were also felt in several other EU countries, owing to the strong international ties within the European automotive industry. Largely influenced by declines in the automotive sector in the Q3’18, the annual GDP growth in the Eurozone slowed down to 1.6 per cent, i.e. the lowest level recorded since 2014. In Germany the GDP only increased by 1.2 per cent y/y, and turned out to be 0.2 per cent lower compared with the Q2’18. The slowdown in the European economy was particularly visible in the trade volumes. According to Eurostat estimates, in the Q3’18 the exports of goods in the Eurozone decreased by 0.4 per cent q/q, which was mainly due to the decline in exports in Germany by 1.6 per cent q/q.

The decrease in German GDP and exports was the result of a significant drop in the number of exported cars. In the Q3’18 it decreased by 19 per cent y/y. The decline in German exports was strongly influenced by the collapse in the exports of diesel-powered cars, which decreased by over 180,000 units, i.e. by 40 per cent compared to the Q3’17.

This was the sixth consecutive quarter of decline in the exports of diesel-powered cars manufactured in Germany. However, the magnitude of the collapse in exports in the Q3’18 exceeded a similar situation which occurred during the crisis in 2009. According to the analysts, this could mean the end of cars with diesel engines, which would have a particularly negative effect on the German economy. Diesel-powered cars have played a very important role in German automotive exports thus far. Until 2016, they accounted for over 40 per cent of the total number of cars exported by Germany. Meanwhile, by the Q3’18 their share in vehicle exports dropped below 30 per cent.

The German sector of diesel-powered vehicles wasn’t the only one to suffer from a collapse in demand. The exports of cars with gasoline engines also declined in the third quarter of 2018. The exports of such vehicles decreased by 7 per cent compared with the previous year, following three consecutive quarters of rapid growth in sales. This clearly indicates that some manufacturers of gasoline-powered cars also weren’t well prepared for the introduction of the new emissions standards. 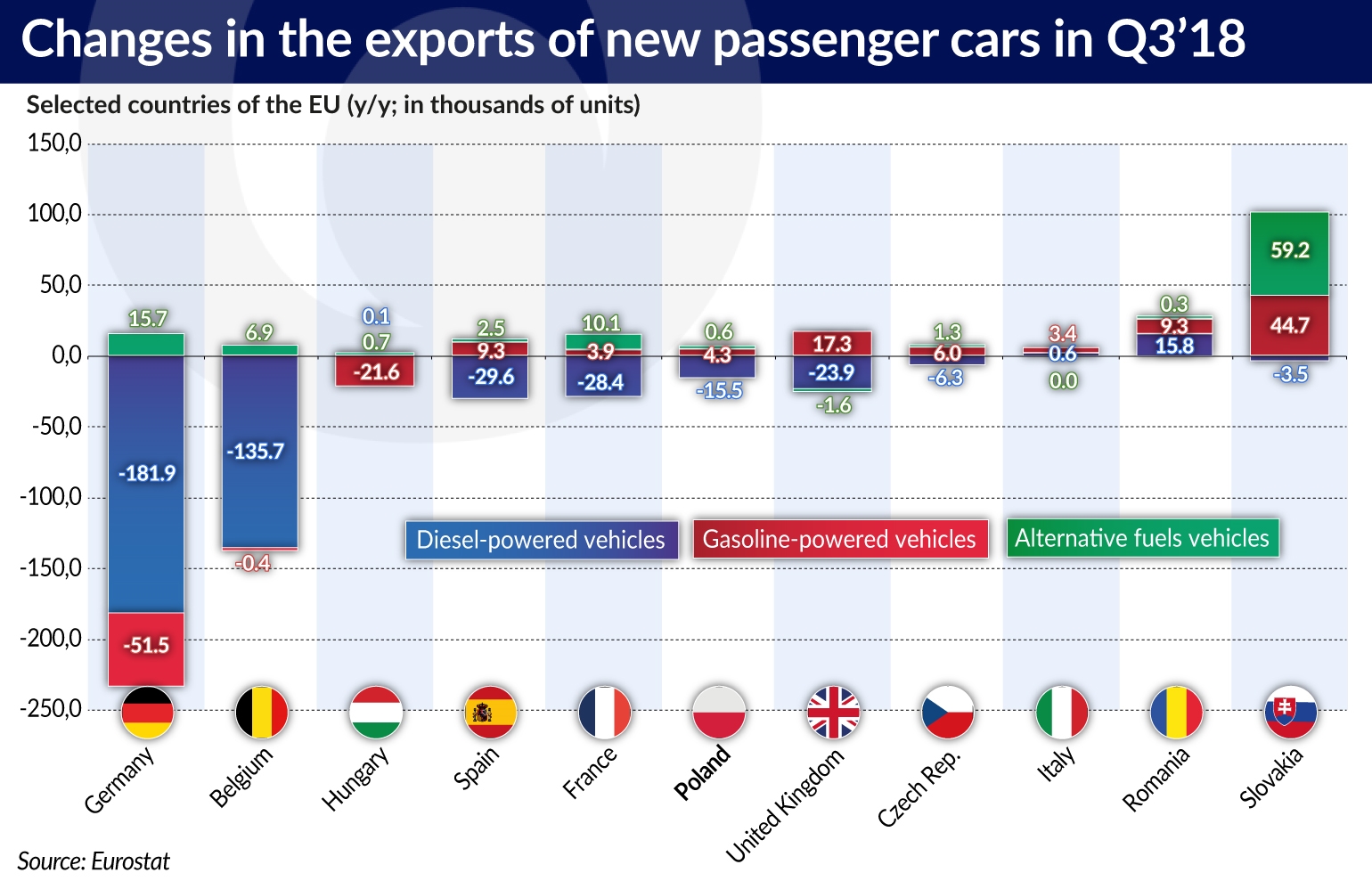 The slowdown in the production and exports of cars led to a decrease in the German factories’ demand for car parts. In the Q3’18, the value of imports of automotive parts into Germany, expressed in EUR, decreased by 6 per cent compared with the previous year. The drop in demand has primarily affected suppliers from the countries of Central and Southeast Europe (CSE), which are the most important exporters of automotive parts to Germany. The imports of car parts from the CSE region decreased by 11 per cent in this period. However, the decline in the imports of automotive parts from Poland turned out to be relatively smaller (5 per cent). This resulted, among other things, from a further increase in the share of gasoline engines — which are less affected by the weakening demand — in Polish exports. They currently account for 44 per cent of the engine exports in the automotive industry (a year earlier they accounted for 32 per cent of all engine exports).

Polish exports of car parts to Germany decreased in the Q3’18. This decline was partially compensated by an increase in the supplies from Polish factories to Slovakia and Romania. In the Q3’18 both of these countries recorded a large increase in car exports — in Slovakia the exports increased by 100,000, and in Romania by 25,000 units compared with the previous year.

Slovakia can be seen as a positive exception in the context of the deteriorating situation in the European automotive market. In 2018 Slovakia’s production and exports of cars grew. In the first three quarters, the number of new passenger cars exported increased to 980,000 units, i.e. by almost 30 per cent compared with the previous year. In the Q3, Slovakia became the fourth largest exporter of cars in the European Union, overtaking the United Kingdom, France and the Czech Republic over the course of twelve months. 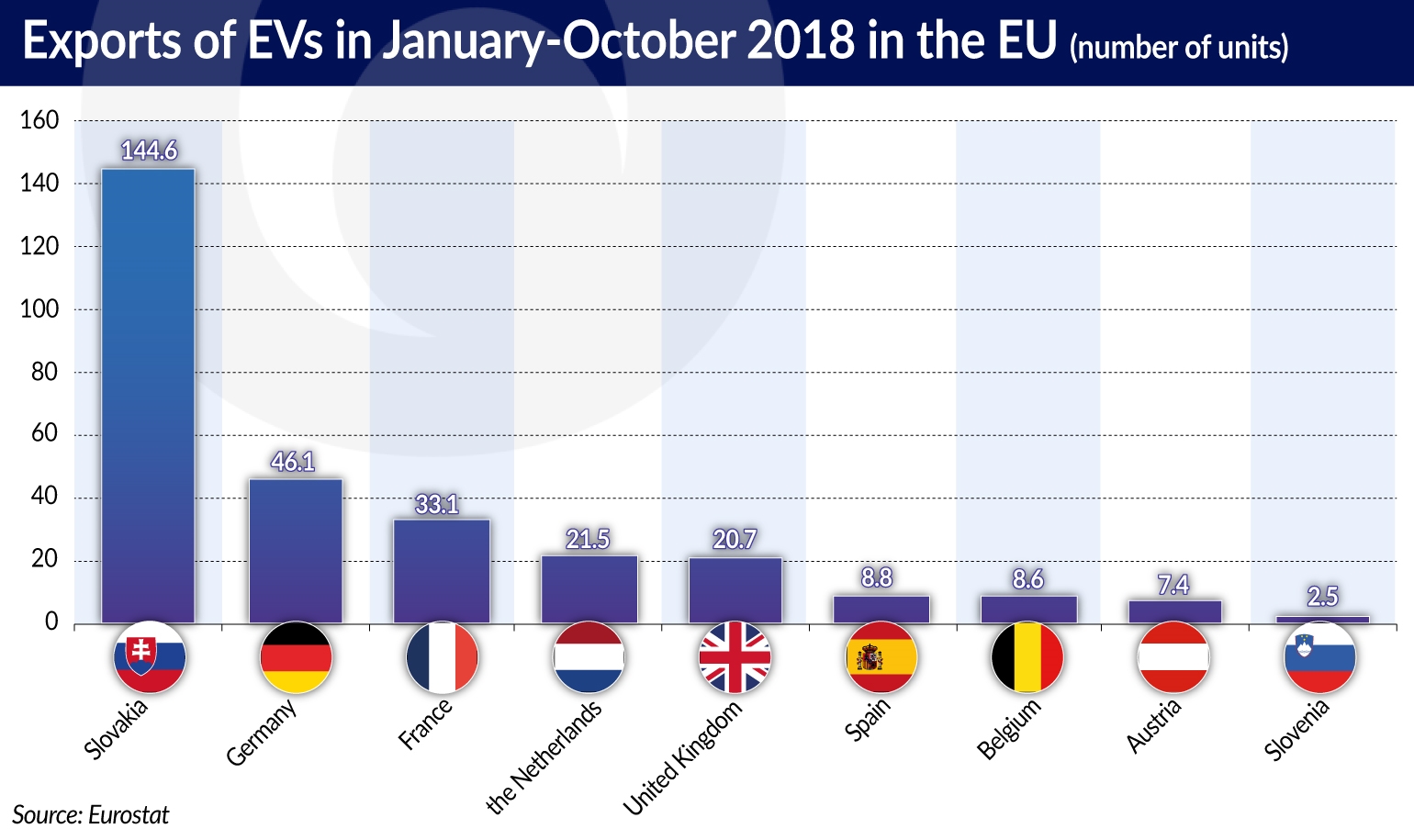 In the Q4’18 the situation on the automotive market also remained far from stable. Potential buyers continued to put off the decision to purchase a new car. This is indicated by the declines in the number of registrations of new passenger cars in the subsequent months. In total in the EU member states 8 per cent fewer cars were registered in the Q4’18 than in the same period of the previous year. This had a negative effect on the production in the automotive sector. According to data from the German Association of the Automotive Industry (Verband der Automobilindustrie — VDA), in Germany in the Q4’18 production and exports decreased by 14 per cent compared with the previous year. German factories exported less than 930,000 cars, which was the weakest result since 2008.