82 per cent of EU subsidies goes to 20 per cent of the largest agricultural farms. The Common Agricultural Policy in its present form is pushing European agricultural to a dead end: it causes the sector to be dominated by big, industrialized farms.

The Common Agricultural Policy (CAP) accounts for as much as 40 per cent of the European Union’s budget, and its value is approximately EUR58bn euro per year. A lion’s share of that (as much as 75 per cent) is allocated to the so-called direct payments (the rest goes to the Rural Development Program). Direct area-based payments, provided for each hectare of cultivated land, account for 90 per cent of the aid. This means that large farms receive the same amount per hectare as smaller or the smallest farms.

According to the authors of the report entitled “Agricultural Atlas 2019: Facts and figures on EU farming policy”, prepared by the German Heinrich Böll Foundation and the Polish Institute for Sustainable Development, this structure of CAP has disastrous consequences. As much as 82 per cent of EU subsidies go to 20 per cent of all farms — the largest and most profitable ones.

The European Union’s agricultural sector is increasingly dominated by large, industrial farms, which are taking over more agricultural land and, consequently, a growing share of EU subsidies. On the other hand, the number of small and medium-sized farms is quickly falling. In the years 1990-2013 the number of large farms (over 100 hectares) in some EU member states increased fivefold. Meanwhile, in the years 2003-2013 the overall number of farms in the European Union declined by one-fourth (and in Slovakia and Bulgaria by as much as two-thirds). These figures reflect the closing down of hundreds of thousands of small and medium-sized farms. One contributing factor here are the persisting differences in the amounts of direct agricultural subsidies: in Western Europe, these subsidies are still much higher than in Central and Southeast (CSE) Europe. 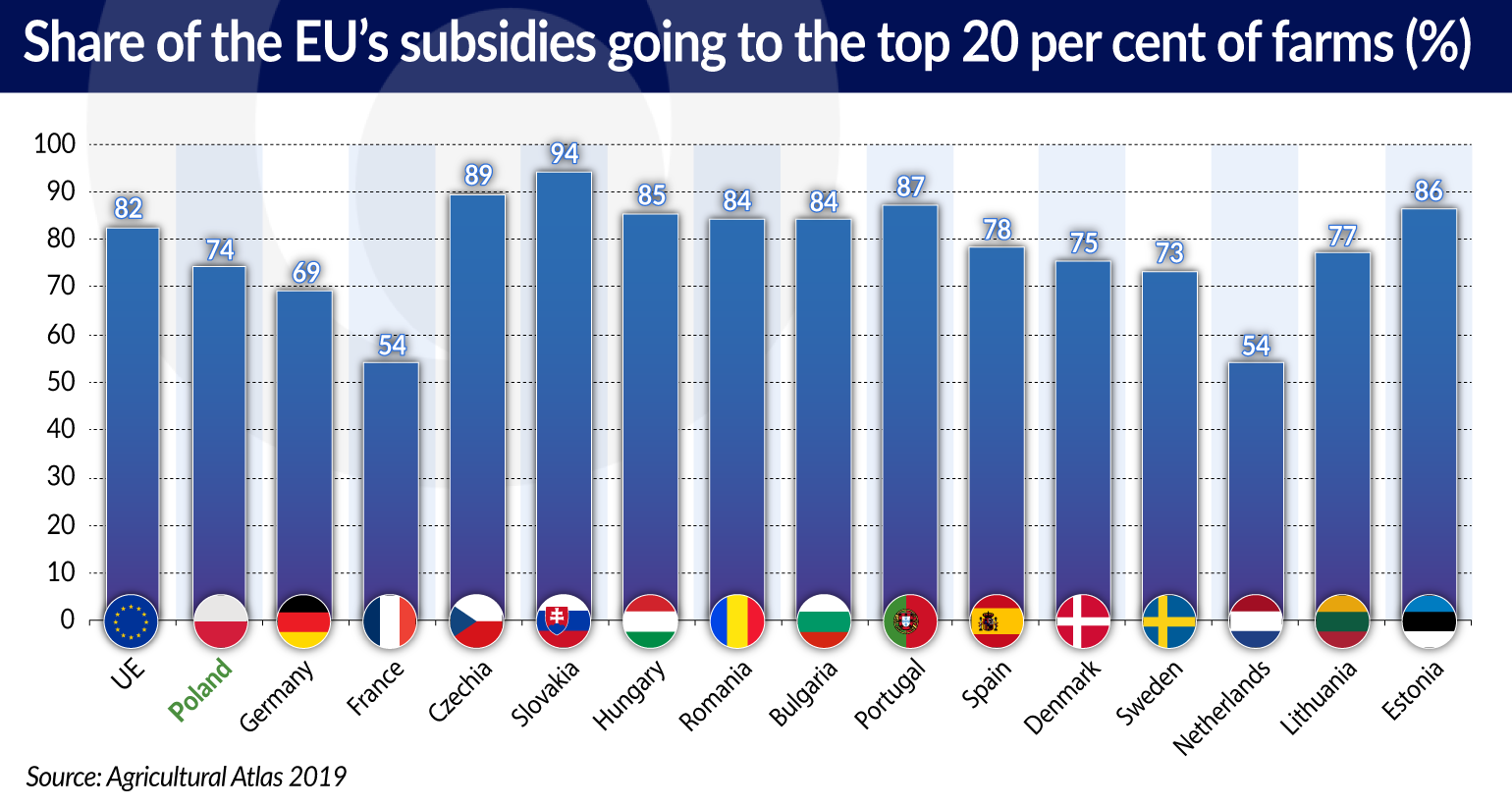 EU subsidies have also led to an increase in the prices of arable land. In Poland in the years 2011-2017 these prices doubled (to almostEUR10,000 per hectare) and are now higher than in some Western countries, such as France, Sweden and Finland, not to mention Czech Republic, Croatia and Hungary. The increase of land prices is mainly because it’s seen as an investment. In Poland, many people are leaving agriculture, but they refuse to sell their land. Instead, they lease it in order to continue receiving EU subsidies. This is confirmed by data presented by the Statistics Poland (GUS), which indicate that the number of active farmers is decreasing, while the number of those collecting subsidies from the EU remains at the same level.

As a result, as much as half of the agricultural land in the EU is leased. If we consider the fact that more than 50 per cent of the agricultural land in the European Union belongs to just 3.1 per cent of all agricultural holdings, the picture is quite horrifying. Contrary to popular beliefs, the European Union’s agriculture, just like the agricultural sector in the United States, is dominated by large agricultural companies and industrial livestock farms, which are primarily focused on efficiency. In half of all the EU member states, more than three-fourths of all animals are raised in very large farms, while in the Benelux countries and in Denmark this share reaches 90 per cent. At the same time, the number of animals raised on small farms has decreased by half since 2005.

Large farm holdings raise their productivity by simplifying crop rotation, introducing intensive animal farming and large-scale monocultures, replacing native feeds with soybeans imported from outside the EU, and relying on the extensive application of pesticides, artificial fertilisers and antibiotics for animals, despite the fact that this is harmful to human health and to the natural environment. According to the authors of the “Agricultural Atlas”, in Poland the use of pesticides tripled after the accession to the EU.

Another issue is soil contamination, as well as the reduction – over the long term – of soil depth and soil fertility. This is also caused by the way in which land is being fertilized. In large farms natural fertilizers (manure) are replaced with artificial fertilizers, which are not well absorbed and largely run off from the farmlands into streams, rivers and lakes. This leads to water eutrophication.

Agricultural production boosted by pesticides and artificial fertilizers is only one side of the coin. The other is that majority of animal husbandry in the European Union’s agricultural sector is the so-called industrial livestock production, with cages and slatted flooring made of concrete, metal or plastic, rather than a traditional straw bedding. Such methods are cheaper, and the animals are growing faster. As a result, the animals raised in industrial farms often suffer from health problems and diseases that need to be treated with antibiotics, which contributes to the emergence of drug-resistant bacteria. However, this phenomenon affects not only animals, but also people.

Intensive, large-scale agriculture generates so many serious problems that it is difficult to list and describe all of them. Such agriculture could be compared to economic overexploitation, which is a policy that has already been abandoned by developed countries. Why are we waging a war against smog, but remain so passive when it comes to intensive, industrial agriculture, even though its effects on human health and the environment are just as alarming as in the case of excessive air pollution?

The European Union’s Common Agricultural Policy was established in the very early days of the European integration, over 60 years ago. Its objective was to ensure that the countries belonging to the European Community have enough not too expensive food. So it supported the growth of productivity in farms. It also attempted to stabilize the prices of agricultural products, and to provide farmers with a level of income and a standard of living which would ensure that there are enough people willing to work in agriculture. Because of guaranteed prices and incomes, already in the 1970s European agriculture started to produce more food than the population of the EU was able to consume. The European authorities responded to this production surplus by introducing subsidies for the exports of food products outside the EU.

It initially seemed that the problem was solved, but such price dumping ruined the prospects of agriculture in other parts of the world, and especially in the Third World countries and developing countries, inhibiting the growth of food exports and, consequently, the development of local economies. This gave rise to widespread criticism. As a result, the EU reduced the subsidies on food products exports, and in 2015 abolished them. And also started to gradually withdraw from a model of direct payments to agricultural holdings in which the value of subsidies depended on the achieved production volume and replacing it with area-based subsidies, calculated for each hectare of land.

The last reform of the CAP, implemented in 2013, consisted of a set of environmental sustainability measures. Increased subsidies were provided for the introduction of environmentally friendly methods of crop cultivation and animal breeding. When the reform was prepared, there were proposals to introduce a limit on direct agricultural subsidies at the level of EUR300,000 annually per farm. The objective was to ensure that these subsidies are not used by large-scale farms and wealthy farmers who don’t really need it. This idea was rejected.

Today, as the EU budget for the years 2021-2027 is being negotiated, some claim that the Common Agricultural Policy requires further reform. Just like in the past, this generates serious disputes among the member states. This is due to the fact that the agricultural sectors in the individual EU member states are different, and it is difficult to create a common policy that could reconcile the interests of all countries.

Polish agriculture is in a particularly difficult situation for a number of reasons. Firstly, Poland has worse climatic conditions for agriculture than most of the EU member states and less fertile soils. Secondly, Poland suffers from insufficient freshwater retention. As a result, its agriculture is more vulnerable to droughts. Thirdly, in conditions of low unemployment the Polish agricultural sector has started experiencing labor shortages. And finally — the Polish agricultural sector, like in Romania or Greece, is still much more fragmented than in the majority of EU (the average size of a farm holding in Poland in 2018 was 10.81 hectares, while in Germany and France it was over 50 hectares, and in Czechia and Slovakia it exceeded 75 hectares).Polish farmers are not organized, only a very small percentage of them belong to producer groups and cooperatives. In Western Europe, a large part of the agricultural and food processing industry belongs to the local farmers.

In 2017, food prices in Poland were the lowest among the EU member states. This could be seen as good news for the consumers. However, we have to ask about the quality of the food, and how this situation translates into the condition of the Polish agricultural sector. A lot of the small farms only exist “on paper” — for the purpose of collecting EU subsidies. Medium-sized farms are also in a difficult situation, as they too are being driven out of the market by large-scale farming operations.

In Poland — as opposed to Western Europe — the number of organic farms is decreasing. Their numbers were growing rapidly until 2014, but have been falling since then. This is, among other things, due to the fact that when it comes to food purchases, the decisions of Polish consumers are mainly based on the price (organic products are more expensive).

On the other hand, since food is cheap, a lot of it is being wasted. Nearly 90 million tons of food is wasted in the EU each year, and Poland accounts for 10 per cent of that amount. If food products were more expensive and of a better quality, they could be stored for a longer period of time, which means that people would be buying and also throwing away much less of them.

The authors of the “Agricultural Atlas” report recommend a number of solutions that share one common feature: differentiating the EU support for farm holdings. More support than before should be provided to small and medium-sized farms, for organic farming and production methods. At the same time, direct payments to large farms should be reduced or even eliminated. For example, natural methods of crop protection, which are harmless to human health and the environment, could be used instead of pesticides, and manure could be used instead of some fertilizers. Such methods can only be applied in small and medium-sized farms.

According to a report entitled “Prospects for sustainable agriculture in Poland”, prepared by the Institute of Public Affairs and the German Heinrich Böll Foundation, Polish farmers are not happy about the fact that they have to use more and more pesticides and fertilizers, and their transition towards intensive, industrial agriculture. They are well aware of the negative consequences. However, the conditions in which Polish agriculture currently functions are conducive to the implementation of industrial methods of crop cultivation and animal farming. As a result, the farmers are forced to use increasing amounts of pesticides and fertilizers, and to forgo crop rotation.

This means that simple incentives, such as reducing or eliminating subsidies for large farms, and increasing subsidies for small and medium-sized farms, or facilitating their access to the markets, would be enough for the European Union’s agriculture, as well as Polish agriculture, to become truly sustainable, and to stop the sector’s transition towards increasing industrialization.