28.09.2016
German Chancellor Angela Merkel visit in Warsaw was only one station of her travel diplomacy with the aim of at least symbolically containing the shock after the Brexit referendum. 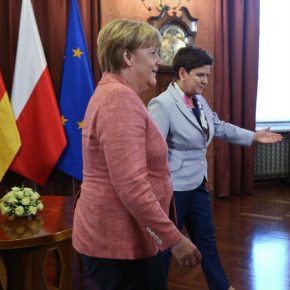 Before her visit to Warsaw, Merkel met with the Italian Premier Renzi and the French President Hollande on the Italian island of Ventotene, where they visited the grave of Altiero Spinelli, one of the so-called founding fathers of European integration. A working meeting followed on the Italian aircraft carrier “Garibaldi”, the key component of the EU’s refugee-rescue mission in the Mediterranean. All heads of states declared that “this is the beginning of a new Europe”. All of this conspicuous symbolism and public reassurances point to a deep insecurity the EU has found itself in after the Brexit referendum.

The diplomatic marathon is the beginning of the so-called “reflection process”, during which the EU will attempt to find solutions to the most conflict-ridden issues and problems, while at the same time London is expected to make up its mind about when to notify the EU about the intension to leave the bloc (which it didn’t do so far). Such reflection phases are rather typical for the EU history, as they often follow “shock situations”. A more recent reflection period occurred after the failure of the Constitutional Treaty in 2005, when it took two years to assume new treaty negotiations. But then the main concern was to rescue as much as possible from the Constitutional Treaty into a new one. This time, though, the challenges are more complex. There is one major risk the EU has to deal with: regional fragmentation.

Germany’s leadership in the crisis

Berlin has put two main topics on the agenda of its revived Europe project: the strengthening of the Eurozone and the refugee crisis. The aim is to stimulate a new integration dynamic in these two areas. However, it is quite likely that Berlin has badly misread the situation, since exactly these two policy fields can become catalysts of regional fragmentation in the EU.

Concerning both issues Germany can officially count on the support of the six founding members but in reality this support is questionable. So far the refugee relocation mechanism has not functioned at all, even in the supporting countries, despite the EU’s decision in September 2015 to relocate 120,000 refugees from Italy and Greece to the remaining countries (with the exception of the UK, Ireland and Denmark which negotiated their way out of the EU’s Common Asylum System). According to the EC’s data in 2016 the number of refugees taken by the EU countries have ranged from 2 in Bulgaria, 140 in Finland to 540 in France, which makes less than 1 per cent of the target. It clearly shows that in this matter Berlin is not supported by Paris. DGAP, the Berlin leading policy think tank, suggests in its analysis that France has been the main “brakeman” of the German attempts to institutionalise the relocation mechanism at the EU level. Even though both countries publically defend the idea, request European responsibility for the refugee crisis, and criticise nationalism in Central and Eastern Europe (CEE), Paris has done little to give more substance to this policy. As the DGAP analyst Mathieu Tardis argues, the French-German collaboration is merely a façade which camouflages France’s lacking investments in the asylum system and its more general avoidance of burden-sharing. This will not change until presidential elections in France in 2017 and perhaps even afterwards, as the current government is under pressure from the right wing Front National regarding the refugees issue and it has to play the ball in the right field. Also, France has in fact lost its status as a target country for refugees which further diminishes the will to really support Berlin. Moreover, it is not only the CEE countries (which become often demonised in the German press and public debates as the only culprits draining the EU funds but refusing to show solidarity) but also their Nordic counterparts that show reluctance towards the relocation plans. Both in Stockholm and Copenhagen there are minority governments with limited space for manoeuvre facing ring-wing populists in parliaments (Sweden Democrats, as the third party, and Danish People’s Party, as the second party). In Finland, the populist and Eurosceptic the Finns Party is a part of the current government and it also controls Foreign Ministry thus a refugee-friendly policy in Helsinki is rather out of question.

It was obvious that Angela Merkel did not come to Warsaw to shame the V4 countries, as they expressed their resistance against the EU’s relocation regime quite often and unmistakably (with Slovakia filing a lawsuit against the relocation decision at the European Court of Justice in December 2015, and Hungary holding a referendum on the issue on October 2nd). It was rather a signal that Germany wants to keep the topic on the agenda and Berlin is not afraid of dealing with it, even under less than friendly circumstances. However, further pressure by Berlin might alienate the relocation sceptics and lead to a fragmentation of the EU, where separate sub-blocs would emerge with differences difficult to bridge.

The Eurozone: The core of integration or disintegration?

The pressure to expand the Eurozone might have similar fragmenting effects. The authors of SWP’s, German Institute for International and Security Affairs in Berlin, analysis ­-­ Tobias Etzold and Christian Opitz – wrote that the Nordic EU members (Denmark, Sweden and Finland) and the Nordic EU associated countries, Norway and Ireland, are the most concerned ones about the consequences of the Brexit and they might feel compelled to readjust their position within the EU. The UK is a highly relevant trading partner for them and with the exception of Finland all the Nordic countries do not belong to the Eurozone. After the Brexit referendum the Sweden Democrats, the Danish People’s Party and the youth organization of the Finns Party demanded exit referenda in their countries. Since the Finns are members of the government, their leader and the Foreign Minister Timo Soini proposed a referendum after the parliamentary elections in 2019. Even though there is currently no majority in favor of exit referenda in the countries in question, it still might change if the pressure for expansion of the Eurozone should increase. In this case, the Eurozone can be more convincingly presented as a threat to a national sovereignty of the non-Euro countries, which in turn might fuel populist’s exit campaigns. According to the SWP analysis, there is an on-going debate in Sweden about Stockholm replacing London as the speaker of the non-Euro countries. This might allow a stronger Swedish-Polish collaboration in this area. Both countries have already closely collaborated in the past, for instance on the Eastern Partnership initiative in 2008, and always belonged to the most fervent critics of the German-Russian Nord Stream pipeline (even though they were unable to effectively hinder the project).

There is a further aspect which Berlin seems to overlook. Pressure has never really worked in the EU. Most of the progress in the European integration have been achieved through package deals rather than alienation and pressure. The latter did work only when resistance came from a single country, for instance Poland during the Lisbon Treaty in 2007 or UK during the 2014 voting on the new President of the European Commission. That is why the main source of the institutional failure of the refugee relocation is the misapprehension of the role majority decisions in the EU really play. In September 2015, the EU introduced the relocation mechanism by the majority decision that was clearly against the interest of a number of countries including Romania, Hungary, Slovakia, and the Czech Republi, which were outvoted. The breaking down of the relocation mechanism is the consequence of the decision-making mode, since the majority decision has been always used in the EU as an institution of the last resort, mainly to discipline the countries to make a decision, so negotiations do not take forever. In contrast, the compromise-seeking and package deals have always had a higher chance of success.

There are two instruments that can be used to prevent further fragmentation of the EU. First, the EU would be well-advised to revive multilateral institutions that cut across regional cleavages. Like the Weimar Triangle created by Germany, France and Poland in 1991 to facilitate Poland’s integration with the Western institutions. It remained inactive in the recent years, mostly as a result of French disinterest. Interestingly, there has been recently some new interest by all countries to breathe new life into it. The Triangle could be used to coordinate controversial policy issues.

Second, Berlin should put democratization of the EU on the agenda of the “reflection phase”, as one of the main reasons for the increasing political support for Eurosceptic populist parties in almost every member state are limited opportunities of political participation of average citizens. A new European convention might be an appropriate platform for reflecting on such reforms, as it could be modelled after the Convention on the Future of Europe in 2001-2003 which saw participation of a variety of actors representing governments, parliaments and civil society debating on the European Constitutional Treaty.

Ireneusz Pawel Karolewski is an Associate Professor of Political Science, Willy Brandt Centre for German and European Studies, University of Wroclaw in Poland. He was Kosciuszko foundation fellow at Center for European Studies, Harvard University in 2014 and Visiting professor at the John F. Kennedy School of Government, Harvard University in 2015. His research interests are social and political theory, European Union governance and EU foreign policy. 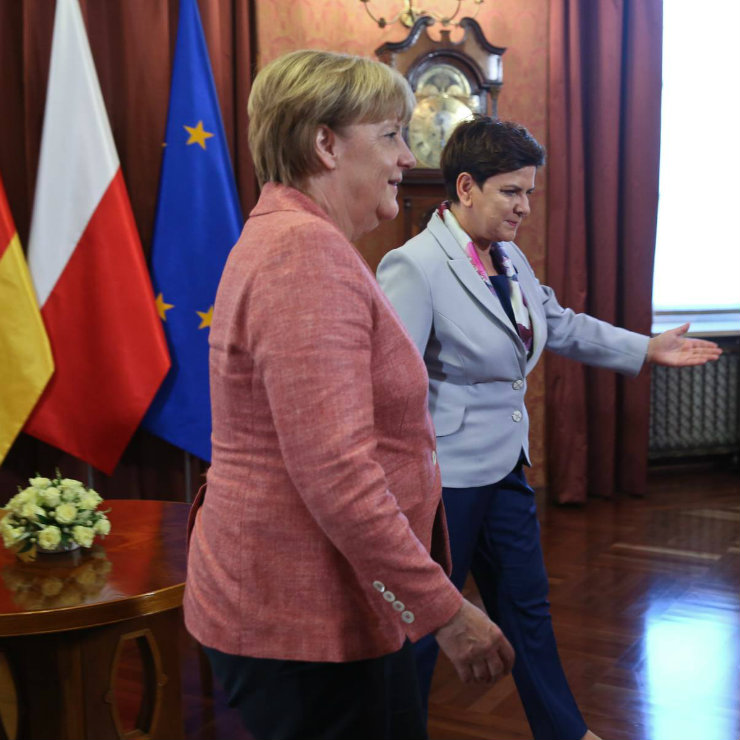