14.02.2013
One may have the impression that few months before the elections, Angela Merkel's government has no serious worries, especially in the light of 2012 economic indicators, published on 15 January by the German statistical office. Germany's economy grew in 2012, albeit slightly, and will continue to grow in the future. The country has found a way out of the European export deadlock. One cannot say, however, that it has managed to solve all its problems. 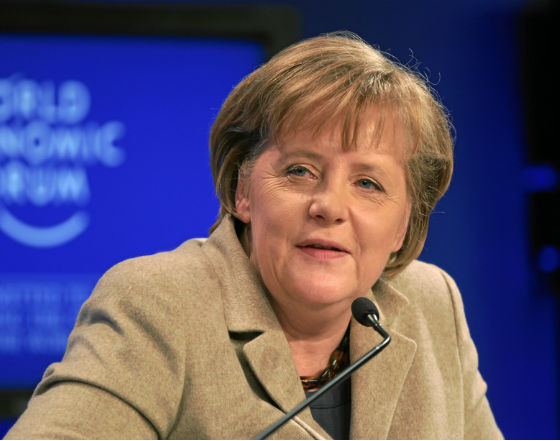 The average growth rate in Germany for 2012 was 0.7 per cent. Despite the apparent decline in relation to the previous years (in 2011 and 2010, the economy grew by 3 and 4.2 per cent, respectively), it is still a success in comparison with the performance of other European countries. Germany’s growth has been slow, but stable. According to most forecasts for 2013, German economy will continue to grow.

What is more, the government managed to operate within its budget in 2012, and even to reach a surplus estimated at about 0.1 per cent. This has been the first balanced budget in German since 2007. It is therefore understandable that „Der Spiegel” felt no need to focus on economic questions when it published, on  January 3, 2013, a list of challenges to be faced by Angela Merkel in the coming months.

Not surprisingly, instead of focusing on the economy, „Die Welt” devotes its space to the controversy that has arisen around Philipp Rösler – Asian-born German Minister of Economy. Space fillers are predominant in German newspapers. An example of this phenomenon might be Phillip Wittrock’s article of January 3, 2013 on the five tasks that the Chancellor of Germany must address before the autumn elections. These are:

– the need to speak out on important social issues (Wittrock calls Merkel „Ms Foggy” and accuses her of not favouring any specific solutions that could, for instance, contribute to improving the living standards of the elderly, or introduce different tax reliefs for traditional and same sex marriages),

– the need for making her public appearances more accessible (Merkel’s speeches are said to be  gruff),

– stabilization of Europe in its fight against the crisis (Wittrock refers to this task in a specific manner, pointing out that as the elections approach, the CDU government’s enthusiasm for the idea of ​​”more Europe” and delegating powers to Brussels is waning, as this attitude does not go down well with German voters),

– developing a succession plan (Merkel has been the leader of the CDU for 13 years, and the Chancellor for eight years – even if she wishes to continue for four more years, she should already present her successor),

– replacement of some Cabinet members (reproaches: popularity of the ministers is too little, and those who are better recognised may attribute their popularity  to scandals and controversies, such as accusations of plagiarism brought against such the Minister of Education Annette Schavan).

When reporting pre-election disputes between the CDU and the SPD, media focus on the weaknesses of the left-wing candidate for Chancellor, Peer Steinbrück (former Minister of Finance in 2005-2009). He is said to be doing  everything to make Angela Merkel continue as German Chancellor for the next term of office. Every now and then, the press reports some minor scandals involving Peer Steinbrück. At one time, in autumn last year, a price list of his speeches was disclosed. It was revealed that he earned a total of EUR 1.25 million for paid lectures from 2009 to July 2012; having been paid EUR 14,000 per lecture). Another time, he blundered when he said that the Chancellor of Germany earned too little (less than a president of a medium-sized bank).

The potential economic topic worthy of a wider debate was „dismantled” at the end of 2012, in an interview given by Minister Wolfgang Schäuble to the „Bild” newspaper. The minister denied that the CDU / CSU government was planning to implement austerity policy in Germany after the elections.

He said that his intention was only to draw up (before the election) a budget providing for a balance between revenue and expenditure (which, as shown by Destatis, was already done in 2012). He stressed that he did not know anything about austerity measures to be introduced after the elections. He also referred to last year’s sensational news published by „Der Spiegel”, according to which the Conservatives were planning to cut social spending and raise value-added tax after the autumn elections. –The situation is better than we expected. It is due also to the intensified trade exchange with the United States and Asia. Therefore, the German economy can expect a decent growth in 2013 – Schäuble reassured the readers.

However, several reasons for concern stem from both the Minister’s remarks and the data published by Destatis. These include:

Despite the sluggish economic growth, wages in Germany are rising. On 7 February, Destatis published data on wages in the German economy. In 2012, they grew by 0.6 per cent as compared to the previous year. This means the third consecutive year of wage increase in Germany (in 2011, they increased by 1 per cent and by 1.5 per cent in 2010). Household income in nominal terms had grown by 2.6 per cent and the prices of goods and services had risen by 2 per cent. (more information here).

Schäuble warned against significant wage increases. – It seems to me that moderate increases are possible, but wages should not  rise excessively in the economically uncertain times – he said in an interview for „Bild”. This is, among other things, due to concerns about the competitiveness of the German economy. Although Germany ranked sixth in the competitiveness ranking published by the International Economic Forum in Geneva in September 2012 (it came just before the United States), commentators often point to German labour market’s limited flexibility . This refers mainly to the possibility of staff rotation (redundancies) and wages; the complicated tax system aggravates the problem. 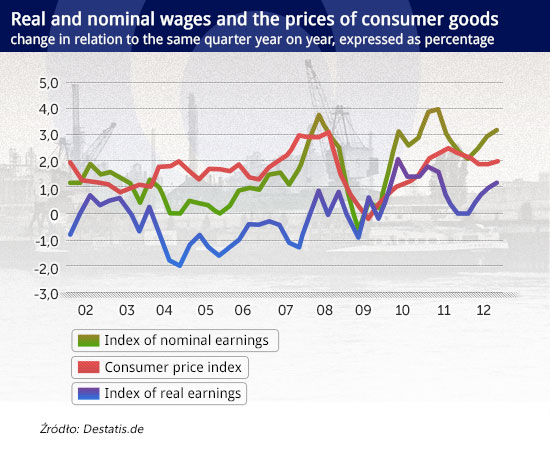 The demographic problem faced by Germany has an impact on the labour market. According to Stratfor research institute, the aging of the German society is one the country’s most important challenges for the coming years.

At the same time, life expectancy in Germany is high, reaching 80 at the moment. Both factors combined may result in a decrease of the German population from 82 million to 65 million people by mid-21st century. In addition, more than half of the population will be over 51 years old by that time. Not only will it affect (decrease) the productivity of German workers, but it  may also weaken strength and importance of Germany on the international stage.

What can be done to halt the unfavourable demographic changes? This topic should be included in the pre-election debate – and, to some extent, it has already been done.

– Every year about EUR 200 billion in the state budget are spent on pro-family policies. According to recent studies, a large part of these resources go to waste because they neither effectively help the poor nor contribute to an increase in births. The majority seem to support the 19th-century family model, in which one person (the husband) works, while the other (the wife) stays at home. The opposition promises to change the entire system – says Dr. Hanno Beck of the University of Pforzheim.

According to 2012 data, German companies stopped investments. Despite the economic growth, the amount invested in fixed assets and equipment (GFCF) had not increased, and in some cases it had even decreased –for the first time since 2009. Investments had shrunk by 1.1 per cent in the construction sector and by 4.4 per cent in the machinery sector.

Investment started to slow down in 2011. It was due to decreasing demand on the European market in the throes of the crisis (EU countries are the main importers of German goods – they account for as much as 65 per cent of the German trade balance). In this context, the data from the report of the German Council of Economic Experts of  November 7, 2012 seem particularly interesting.

According to the report, the economic slowdown in 2012 Q4 was supposed to be the main reason for the German recession (referred to as the economic „slowdown”): „The slowdown in Germany will probably bottom out in the fourth quarter of 2012.Output is then likely to gradually pick up during 2013. Average GDP growth next year should equal this year’s rate of 0.8 per cent. Investment in machinery and equipment should bottom out at the start of 2013. Domestic demand should become a growth driver in the course of the year. We estimate that output growth will lie below its potential growth rate in both 2012 and 2013. Inflation shows a stable development. In 2012 and 2013 consumer prices will probably increase by 2.0 per cent”.

As expected by the Council, after having hit the bottom, the market and the production should start to bounce back in 2013. Is that going to happen? It certainly depends on the business environment which will be created in the next few months by the government of Angela Merkel.

Contrary to what could be expected, the surplus in the trade balance for 2012 also does not inspire too much optimism. Currently, the American (U.S.) and Asian (China) markets are saving German exports, but historically the largest recipient of German goods is Europe (65 per cent of the balance values, as compared to 10 per cent for the United States and 13 per cent for Asia, according to the OECD). The table presented on the OECD website illustrates the structure of German exports in 2012.

Although the surplus in Germany’s balance of trade in 2012 amounted to about USD 200 billion, analysts from the German Council of Experts believe that the trend could be reversed. Everything depends on the situation of the global economy, in which demand is increasingly shrinking.

In addition, data published by Destatis on 7 February indicate that the volume of exported goods had been significantly reduced. As compared to 2011, it had fallen by 2.2 per cent to reach the level of 4.3 billion tonnes in 2012. The economy is hardly moving forward.

The regions’ fight for money

The issue that resurfaces regularly, and seems particularly topical today, is Finanzausgleich, that is transfers aimed at the equalization of tax power of different German regions.

Eastern lands and cities continue to receive financial injections from the state for infrastructure development, improving the financial strength of municipalities, as well as various other assistance purposes. The support will be maintained until 2019 – Today, for example, Baden-Württemberg and Hesse oppose this form of aid. They have decided to take legal action against it. They do not agree with the situation in which they need to save and, for instance, introduce fees for nursery care, so that in Berlin, a city that is practically bankrupt, nurseries are available for free –says Dr. Beck.

One might say that the European policy could become axis of the dispute before the elections in Germany. Merkel, who has advocated austerity policies for several months, is slightly changing her attitude today – as is the entire Ecofin (European ministers of finance) in connection with the situation in Greece.

SPD cannot, however, reproach the Chancellor of Germany too much, as members of the party supported Merkel’s policies in the parliament – especially in relation to bailouts. In an interview with „Der Spiegel”, the SPD leader Sigmar Gabriel claimed only that his party would have focused earlier on pro-growth policies than Merkel had.

In the „New York Times” experts wonder about the strength of the German wallet to which the largely indebted European Union is clinging today. – The longer the crisis in Europe, the more difficult the situation in Germany. German economy is not made of Teflon – warns Stefan  Kooths, an economist from Kiel Institute for the World Economy.

At present, Germany’s public debt reaches the level of 81.7 per cent, which means that it has exceeded the maximum value defined in the Stability and Growth Pact (60 per cent of GDP). Given the forthcoming elections, Angela Merkel cannot afford to burden Germany with any more debt in order to rescue Europe. Who would save Germany if it were to go bankrupt?