Despite an increase in the fertility rate between 2005 and 2018, the demographic crisis in Russia has not been brought to a halt. The main causes of the crisis are the high mortality and poor health of its inhabitants.

However, the current situation is not as catastrophic as the American demographer Nicolas Eberstadt described it in 2009. According to his forecast, the population of Russia would shrink by 20 million in 2030. Since the mid-1990s, there has been a decline in Russia’s population — from 148.2 million in 1995 to 143.6 million in 2005. Between 1955 and 1975 Russia was the fourth most populous country in the world, but since 2010 it has fallen to ninth place (behind Bangladesh and Nigeria). The labor force in this country has been steadily decreasing since the middle of the current decade and in 2017 its size amounted to 76.3 million (a million less than in the previous year). 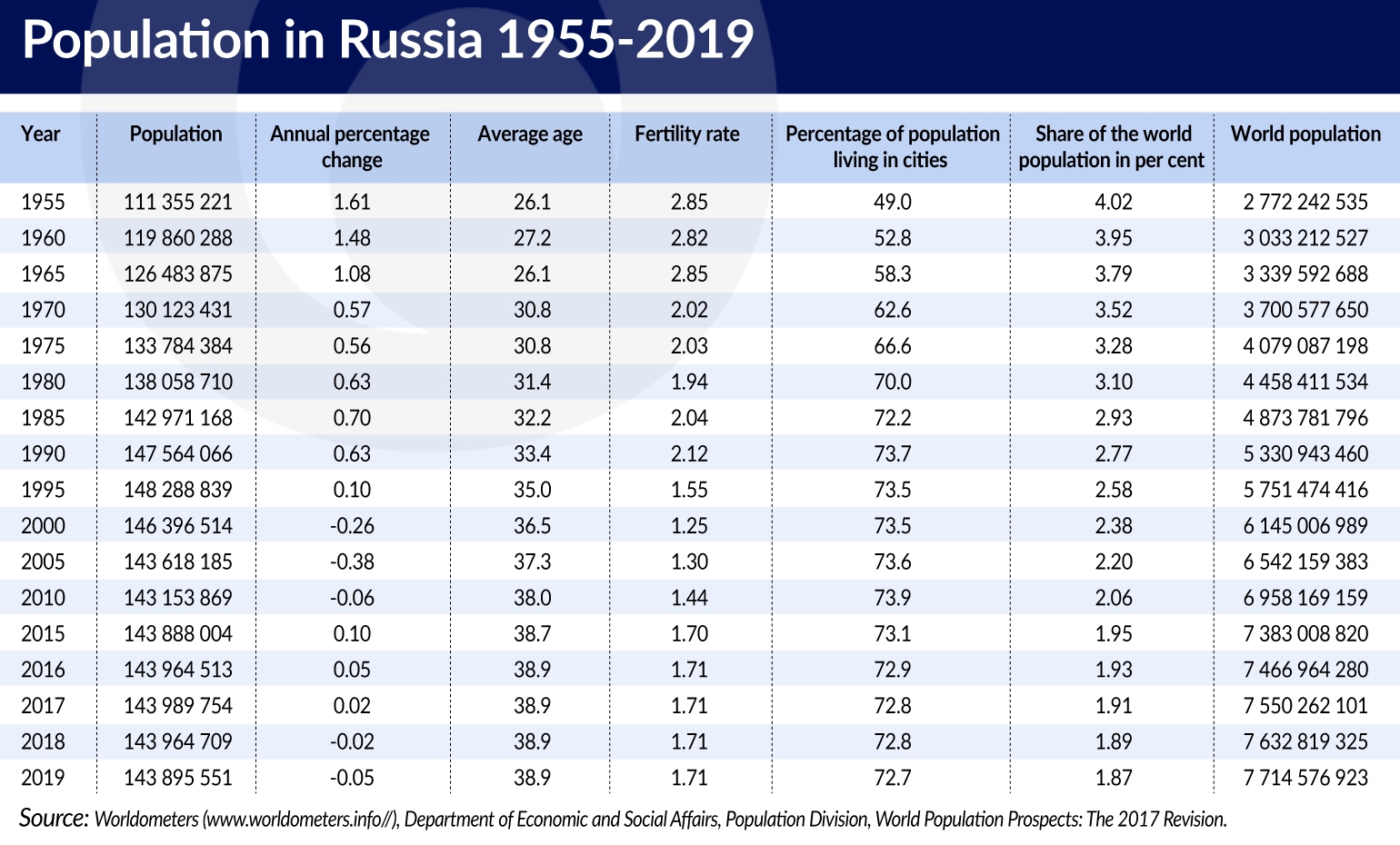 The demographic crisis was not only caused by a significant reduction in the number of births. The total fertility rate (TFR) decreased from 2.12 in 1990 to 1.30 in 2005. In the following years, however, the total fertility rate remained at the same level (1.46-1.57) as in most European countries. The main cause of this crisis has been and remains high mortality and poor public health. There were three deaths per two births in the first decade of the 21st century. In this period, the health of the Russian population was worse than in the Gorbachev or Brezhnev era.

Life expectancy in Russia was 65 years in 2006, (the same as in India), i.e. it was lower than 50 years ago. Between 1965 and 2005, the mortality rate of Russians (number of deaths per 1000 people) aged 15-64 increased on average by about 50 per cent. By the end of the first decade, the life expectancy in Russian had not been significantly extended. This did not happen until the second decade.

The state of public health is one of the most extreme aspects of the demographic crisis in Russia. As a result of the AIDS epidemic, alcoholism and the dreadful state of health care, in the years 2005-2015 the mortality rate in Russia was three times higher among men and twice as high among women as in other countries with a similar level of social and economic development. More than half of the deaths of Russians aged 15-54 were caused by alcohol abuse after the collapse of the USSR. It should be noted that even the increase in the income of the Russian population by about 80 per cent in the years 1999-2008 did not result in a decrease in the mortality rate. High Russian mortality is the result not only of “normally” treatable diseases, such as tuberculosis, but also of lifestyle: drinking vodka, smoking cigarettes and AIDS. Every year, 500,000 people die due to alcohol in Russia. This applies to both women and men. The drug problem is also huge, as the prices of drugs are lower than in Western countries.

Russia is also unable to cope with the prevention and treatment of cardiovascular diseases and cancer, which are the main cause of death. The problem is not only the lack of sufficient funds for health care (until mid-2005, about 4.2 per cent of GDP was allocated for this purpose, while in rich European countries it was on average 8-10 per cent of GDP), but also the country’s unfavorable social and economic situation, relatively low position of health and a long life on the Russian list of priorities, poverty, lack of responsibility for one’s own health, and bad habits.

These are not new phenomena. A similar situation occurs in some Eastern European countries. However, mortality in Russia has always been higher than in most of the developed countries. Life expectancy at birth in Russia is still over 10 years lower than in Western Europe, North America and Japan.

Another equally important reason for the decline in the population in Russia was abortion, which is treated as one of the methods of contraception in some social environments. Most abortions were performed in the former Soviet Union (e.g. in 1988 alone about 7 million). In Russia, however, the number of abortions decreased significantly — to 1.72 million in 2002 and 1.58 million in 2006. In the last year there were 13 abortions for every 10 live births. For comparison, there were only 3 abortions for every 10 live births in the USA at the same time. It should be remembered that the former Soviet Union was inhabited by about 287 million people, and in 2016-2019 the number of inhabitants of Russia stabilized at the level of about 144 million.

The depopulation process started as early as in the 1960s, when the total fertility rate started to fall below 2.1, which meant it did not ensure the interchangeability of generations. At this stage, depopulation was still a latent phenomenon. However, when in 1992 the number of births fell below the number of deaths, the open depopulation phase began in Russia. In 1993 the number of Russians was 148.6 million, and in 2008 only 142 million, despite a large influx of immigrants (almost 6 million). However, the declining demographic trend was accompanied by a favorable change in the age proportions of the population, leading to a rejuvenation of the population and, consequently, a higher birth rate. The effect of the “demographic dividend” had a positive impact on the proportions between parts of the society in the productive and post-productive age. The third, unfavorable period of Russia’s depopulation began in 2005. At this stage, the most noticeable was and still is the decline in the number of people of working age. The total burden of children and the elderly increased from 578 per 1000 people employed in 2007 to 630 in 2018. Some projections suggest that this burden will increase to 822 in 2025.

In Russia, the life expectancy of women and men is almost 10 years lower than in countries with similar levels of economic and social development. The population policy strategy adopted at the end of the last decade assumes that by 2025 the life expectancy of women and men will have increased to 75 years. There are considerable doubts as to whether this objective will be achieved. In many countries, however, this level has long been reached. In Poland, for example, the average age of women in 2008 was already 80, while that of men was 71, while in Russia it was 67.5 and 61.5, respectively. According to the predictions of experts from the United Nations, in the years 2020-2022 the average life expectancy for both sexes in forty countries of the world will be about 80 years. However, Russia is not in the group of these 40 countries.

Another unfavorable demographic trend is the steady decline in the Slavic population. At the time of the collapse of the USSR, Slavs of various nationalities made up 90 per cent of the Russian population, and ten years later 80 per cent. This was due to the influx of immigrants who came to Russia, mainly from Central Asia and the Caucasus. There are also not many Chinese immigrants in Russia, who, contrary to some opinions, do not intend to “colonize” large areas of Siberia and “displace” the native inhabitants of this region. At the end of the first decade of this century, there were 25 million non-Russians living in Russia, while at the end of 2018 the number was 26.2 million. The demographic crisis does not affect immigrants from Muslim countries and their families. The fertility rate of women in this group is much higher (2.4) than that of Russian women (1.5).

In Russia, it is not possible to stop the decline in the fertility rate of women, which is a permanent phenomenon in most economically developed countries. In 2018, the total fertility rate of women was 1.57 (average for all women in childbearing age 16-49). Although the fertility rate was higher than in Poland (1.41) and many Western European countries, it did not ensure simple population reproduction (2.1). Therefore, it cannot be expected that Russia will succeed in significantly increasing the population growth in the coming years. This is confirmed by the most recent statistics. In 2018, 1.6 million children were born in Russia, i.e. 5.4 per cent less than in 2017 (1.7 million). In 2017, there were 11.5 live births per 1000 inhabitants of Russia, while in 2018 there were only 10.9 live births. According to the estimates of the Russian demographer Anatoly Karlin, the total fertility rate decreased from 1.62 in 2017 to 1.57 in 2018. (and in the case of ethnic Russian mothers to the level of 1.5).

The situation is worse in terms of life expectancy. According to estimates by the Russian demographer Alexander Nemtsev, the life expectancy indicator in 2018 was about 72 years. According to forecasts of the UN experts (World Population Prospects, 2017), Russia’s population will shrink by approximately 3.5 million in 2030.

The number of people of working age will reduce the fastest, which has negative implications for the Russian economy. Under President Vladimir Putin’s rule, it was dominated by state-controlled industrial and oil companies. The private sector has been marginalized and most foreign companies have ceased their economic activity in Russia. Revenues from oil&gas exports were not used to create modern branches of industry and expand infrastructure in Russia. The only modern branch of industry and a symbol of Russia’s power is the defense industry.

A significant impediment to changes in the structure of the Russian economy is the shrinking labor force, especially among young and educated people with the skills needed to develop modern, high-tech industries. According to the Minister of Economy Maxim Oreshkin, due to the lack of adequately educated workers, Russia’s GDP has decreased by 14-16 per cent since the beginning of 2000. In his opinion, the only real solution to this problem is to re-qualify older workers (forty- and fifty-years-old) who could take up employment in modern industries.

However, it is not possible to solve the problem of the deficit of domestic workers with the help of immigrants. The vast majority of them do not have the skills sought by Russian and foreign employers. According to experts from RANEPA (the Faculty of Economy and Public Administration of the Russian Academy of Sciences), by 2025 the size of the Russian workforce will be decreasing, which may cause, among other, a drop in the GDP growth rate by 0.4-0.6 per cent annually. Similar trends can be seen in Rosstat’s forecasts, which confirm that unfavorable demographic trends will continue in 2030-2035. The decline in the working-age population (15-72 years) in 2015-2020 will amount to about 8-12 per cent annually, and in the next decade by 11-20 per cent.

Another problem for the economy is the increasingly lower quality of the labor force. It turns out that the pace of technological progress is faster than the pace of changes in Russian vocational and higher education. Top specialists can choose in job offers, while university graduates with obsolete skills have to settle for a low-paid job or join the ranks of the unemployed.

If this process accelerates, Russia may be forced to liberalize its immigration policy more deeply over the next dozen or so years in order to secure an influx of the necessary number of employees. Between 1990 and 2014, over 9 million immigrants arrived in Russia, and yet the country’s population shrank by 3.7 million in this period. In the years 2015-2918 the inflow of immigrants decreased to about 140-160 thousand. More than 80 per cent of immigrants come from the former Soviet republics (most of them from Ukraine — 2.6 million, and Uzbekistan — 2.3 million). The Russian authorities would like to increase the number of arrivals of skilled workers from these countries by 3.2 per cent in the coming years. However, they can no longer count on equally large numbers of immigrants from Ukraine, who are looking for work and better living conditions in Poland and other European countries.