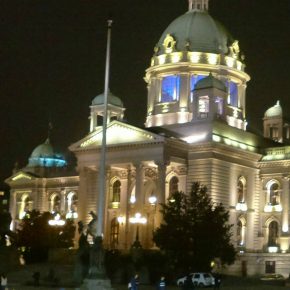 Like in the 2018 budget, funds for raising public sector salaries are provided (these should increase by 7 per cent). This budget expenditure increase will amount to RSD33bn. The expenditures for pensions will rise as well — these are planned to increase by RSD35bn. Prohibition of public sector employment, a restrictive measure that has been implemented for several years already, will still be in force in 2019.

Two non-governmental organizations, the Centre for Research, Transparency, and Accountability (CRTA) and the Open Parliament (Otvoreniparlament), expressed their concern about the parliament not committing enough time to discuss this most important financial law. Namely, the deputies received the budget proposal made by the government twenty-three days later than they had been supposed to, and the proposal was included into the parliamentary procedure the next day.

Regardless of how smoothly it was adopted, this proposal prompted a debate between the economists and economic journalists, followed by the question — is this too much of a deviation from the last year budgetary policy when the government strived to stimulate the economic growth by increased expenditure?

The Fiscal Council of Serbia, headed by a reputable economist PavlePetrović, stated that “there are not enough investments in road infrastructure, education, and health care”. According to his estimates, another EUR200m should have been allocated for these purposes. He believes that the money is intended to be spent on additional army and police equipment, as well as increasing the salaries of public sector employees instead of having more funds for capital infrastructure projects. Having analyzed the provided investment expenditures, he pointed out that the increase mostly refers to land expropriation, whereas the real expenditure for infrastructure will remain at the 2018 level.

When asked to comment on the budget law for 2019, Mr. Petrović once again mentioned his old fear that the electricity system is being neglected and this could pose a high risk to the whole Serbian economy in the future. Namely, in this area, salaries have been increased at the expense of investment funds that are lower than the depreciation costs.

Economist Igor Momčilović, the former Assistant of the Minister of Finance and the State Secretary at the Ministry of Agriculture, Trade, Forestry, and Water Economy, points out that the budget for 2019 is too consumer-oriented.

Like every year, indirect taxes will make a major budgetary revenue, primarily, value-added taxes. It is envisaged that the state’s VAT revenues (which reflect the realization of domestic production on domestic market) are to be lowered by 7.55 per cent compared to 2018, and they should reach EUR588m. Import VAT revenues have increased by 9.74 per cent, so the import VAT will amount to EUR3.9bn. Therefore, the total VAT budgetary revenues are planned to be EUR4.5bn (RSD539bn).

Economists point out that two forms of non-tax revenues are not provided for in the budget — firstly, the concession to the airport “Nikola Tesla” in Belgrade, and the revenues from the National Bank of Serbia profits. The airport concession has been given to a French company Vinci Siniša Mali. The Minister of Finance has said that it should be clear what is going on with that concession by now. Revenues from concessionaire may be included in some budget rebalance in the year to come. Revenues from the profits of the National Bank of Serbia are not planned for 2019 and this budgetary practice dates back to 2014.

It is planned that Serbia will go into debt of additional EUR5.3bn the next year and pay EUR4.7bn to pay off past debts. The remaining EUR600m might imply that the public debt will be increased next year again.