04.01.2021
Poland’s foreign trade surplus is strengthening. However, the value of the trade exchange surplus recorded in the second quarter of 2020 is probably a one-off phenomenon, as it was driven by a strong decline in oil prices and a further decline in imports due to the lockdown. 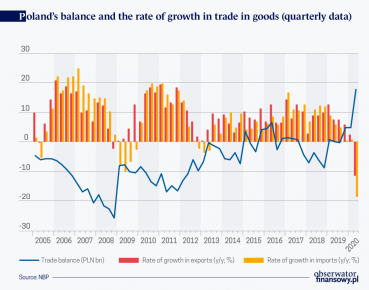 The value of Polish exports of goods exceeded the value of imports for the first time in the first quarter of 2015. Since that time, a surplus in trade in goods was recorded increasingly frequently. In the second quarter of 2020, in the conditions of a strong decline in the value of exports and imports, Poland’s trade surplus reached the record-high level of PLN 17.6 billion, which corresponded to 3.3 per cent of the country’s GDP (meanwhile, in the second quarter of 2019 this ratio stood at 0.0 per cent).

In the second quarter of this year, the balance of trade in goods improved in most European Union countries. This was primarily due to the low fuel prices. During that time, smaller economies, such as Ireland, Latvia, Lithuania, and Croatia, experienced even greater improvements in their balance of trade in goods than Poland. Meanwhile, a deterioration in the balance of trade was primarily recorded in countries characterized by a relatively high share of cars in their exports. This led to a reduction of the trade surplus in Germany and in the Czech Republic, and to an increase in the trade deficit in France and in Hungary.

In Poland in the second quarter of 2020, the ratio of the nominal growth rate of exports and imports was 108.2. The decisive factor behind this result was the improvement of the terms of trade in Polish exports and imports. In the analyzed period, the terms of trade index reached 106.3. This was the highest level in over fifteen years. Meanwhile, the ratio of the change in the volume of exports to the change in the volume of imports stood at 101.8. This means that price changes accounted for almost 80 per cent of the overall improvement in the balance of trade that occurred in the second quarter, i.e., they contributed PLN 13.6 billion to the increase in the trade surplus, while changes in the trade in good volumes contributed PLN 3.9 billion. 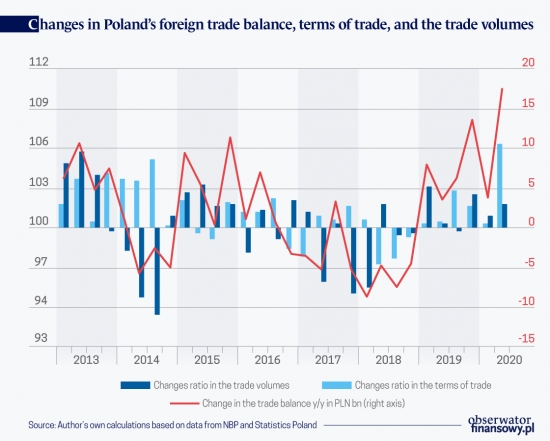 The biggest change in the trade balance occurred in categories covering fuels. In the second quarter of 2020, the trade deficit in this group decreased by PLN 9.5 billion compared to the same period of 2019. At the same time, this was the lowest deficit recorded in the trade in fuels since the first quarter of 2007. The decisive factor behind the decline in the value of fuel imports and the reduction of the negative balance in this category was the strong drop in the prices of energy fuels, and especially oil.

In the second quarter of 2020, the prices of major energy commodities reached long-term lows. The price of crude oil imported to Poland declined by 60 per cent y/y, to the level of PLN 103 per barrel (USD 25.1 per barrel). Such a low price was previously recorded in 2003. Meanwhile, the volume of oil supplies reached 5.9 million tonnes and proved to be only slightly lower than in the previous year (a decline of 2 per cent y/y). In the case of coal, the decrease in the volume of supplies had a greater impact on the decline in the value of imports. In the second quarter, the volume of coal supplied to Poland reached 2.6 million tonnes, which means a decrease of 27 per cent y/y. This was the fifth consecutive quarter of declines in coal imports. At the same time, the prices of imported coal decreased by 16 per cent y/y.

A similarly large improvement in the trade balance occurred in categories covering capital goods and passenger motor cars. In total, the trade balance in these two groups improved by PLN 9.5 billion y/y in the second quarter of 2020, that is, by exactly the same amount as in the case of fuels. 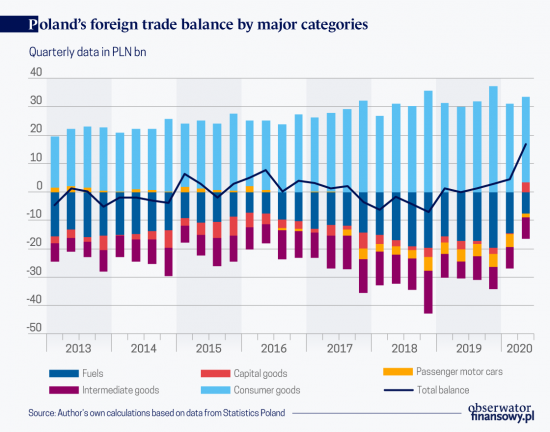 The balance of trade in capital goods (including industrial means of transport) improved by PLN 6.4 billion. In the second quarter of 2020, a surplus of PLN 3.4 billion was recorded in this category, which was the first such case since the foreign trade data are published according to the current methodology. The factors that contributed to this change included, on the one hand, a large increase in the exports of computers and processors, and on the other hand – a sharp drop in the imports of devices, and above all, industrial means of transport. The strong decline in imports in the latter group was associated, among other things, with the crisis in the aviation sector (as a result, passenger airplanes were missing from the imports statistics) and the worse downturn in road transport. These trends were reflected in significant declines in the imports of trucks and tractor trailers.

The reduction of the deficit in the category covering passenger motor cars occurred in the conditions of deep declines in both exports and imports (respectively, by 60 and 65 per cent y/y). Since the imports of cars to Poland are now much larger than their exports, this contributed to a reduction in the deficit by more than PLN 3 billion. In Poland, the decline in the imports of cars was deeper than the average in the EU member states. This difference resulted from the fact that in Poland there was also a decline in the value of imports of electric and hybrid vehicles.

There was a marked reduction of the trade surplus in groups of goods that are seen as the export specialties of the Polish economy. This especially concerned product categories covering parts and components for means of transport and consumer durables, where the trade surplus decreased by PLN 4 billion and by PLN 1.9 billion, respectively, compared to the second quarter of 2019.

Poland is the third biggest supplier of goods to Germany

Interesting changes also occurred in terms of the geographical structure of Poland’s foreign trade exchange. In the second quarter of 2020, the surplus in the trade with Germany exceeded PLN 20 billion, which means an increase of more than PLN 7 billion compared with the same period of the previous year. Among Poland’s main trading partners, the difference between the rate of growth in exports and imports turned out to be the highest precisely in the case of bilateral trade with Germany. While the value of Polish exports to Germany fell by less than 8 per cent, the value of Polish imports from Germany decreased by almost 23 per cent. Due to the relatively small decline in exports to Germany, especially compared with the declines in the exports to Poland’s other major trading partners, Germany’s share in Polish exports increased to 29 per cent, that is, the highest level recorded in fifteen years.

As in the case of exports to Poland’s other major trading partners, the rate of growth of Polish sales to Germany was negatively impacted by a large decrease in the exports of the automotive industry (section 29 of the Polish Classification of Products and Services). In the analyzed period, the value of automotive exports to Poland’s western neighbour dropped by 45 per cent y/y (that is, by PLN 4 billion). Meanwhile, the decline in the value of exports in other sectors turn out to be relatively minor. After excluding the automotive industry, in the second quarter of 2020 Poland’s exports to Germany only decreased by 2 per cent y/y. The scale of the decline was reduced by a large increase in the exports of automotive batteries (classified in section 27 of the Polish Classification of Products and Services), tobacco products, and clothing.

The growth in the exports of automotive batteries coincided with an increase in Germany’s importance as a manufacturer of electric and hybrid vehicles. By now, the German factories have already become the European leaders in the production of vehicles with alternative drive systems. At the same time, despite the pandemic, the second quarter of 2020 saw a continuation of the upward trend in the sales of electric and hybrid vehicles in the European Union. For this reason, the German automakers continued to increase their imports of automotive batteries. In the second quarter of 2020, the value of battery exports to Germany nearly tripled, while Poland became the second most important exporter of lithium-ion batteries to the German market following China. A large increase in exports to Germany was also recorded in the case of tobacco products, clothing, and video games equipment. This contributed to a continuation of the upward trend in the exports of consumer goods.

The so-called mirror statistics also point to a relatively small decline in the exports from Poland to Germany. The scale of this decline was lower than in the case of exports from other European Union countries. After the first six months of 2020, Poland was the third largest supplier of goods to Germany (after the Netherlands and China). Compared to the first half of 2019, Poland overtook France and Belgium in this respect. In 2020, Poland’s share in German imports increased to 6 per cent.

In contrast to Poland’s exports, the decline in imports from Germany was deeper than in the case of imports from other countries. In addition to the large decrease in automotive imports (by PLN 6 billion), this was primarily due to the decrease in the supplies of machinery and equipment, as well as intermediate goods – primarily chemical products and plastics.

The changes in Poland’s balance of trade with other countries were strongly affected by the decline in the value of fuels. Due to this group’s significant share in Polish imports, we observed a big improvement in the balance of trade with Russia. The deficit in Poland’s trade with Russia dropped by about PLN 5.7 billion y/y, to just PLN 1.6 billion, which is the lowest level recorded in this century. In 2019, Russia accounted for more than 50 per cent of the value of Polish fuel imports. Meanwhile, fuels accounted for nearly 80 per cent of the value of imports from Russia.

The pandemic has deepened Poland’s trade deficit with China

The opposite trend was observed in Poland’s trade exchange with China, where the trade deficit further deteriorated. In the second quarter of 2020, Poland’s deficit in the trade exchange with the word’s biggest developing economy grew to PLN 27.3 billion. The large increase in imports from China (by nearly 10 per cent y/y) was associated with two circumstances. 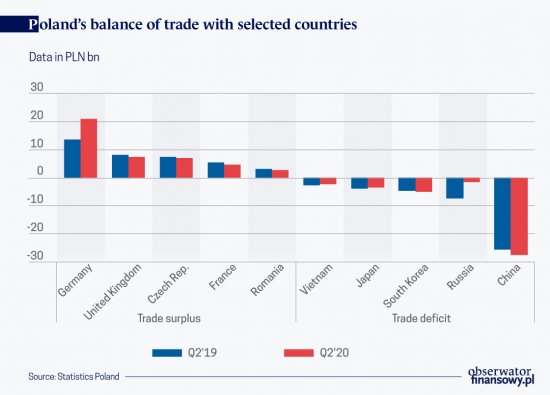 Firstly, in light of the pandemic there was an increase in the supplies of personal protective equipment. In the reported period, the value of the imports of protective masks from China reached PLN 1.4 billion (80 per cent of the masks imported to Poland from April to June came from China). Additionally, the increased demand for computers as well as computer parts during the pandemic, was primarily met with imports from China.

Secondly, during this time we observed the resumption of imports from China as part of the international supply chains following the interruptions caused by the intensification of the pandemic in that country (in the first quarter of 2020). This was reflected in an increase in the imports of intermediate goods. As a result of these circumstances, China’s share in imports to Poland increased to 15 per cent. 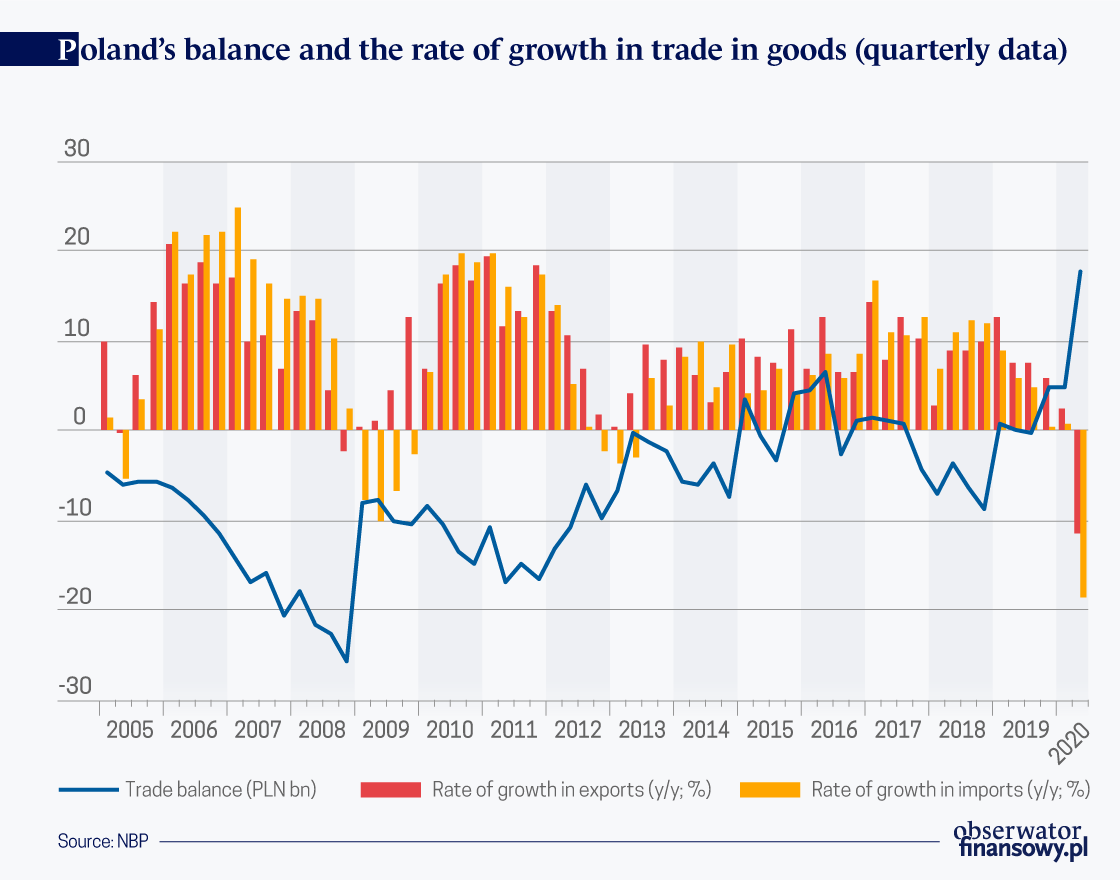 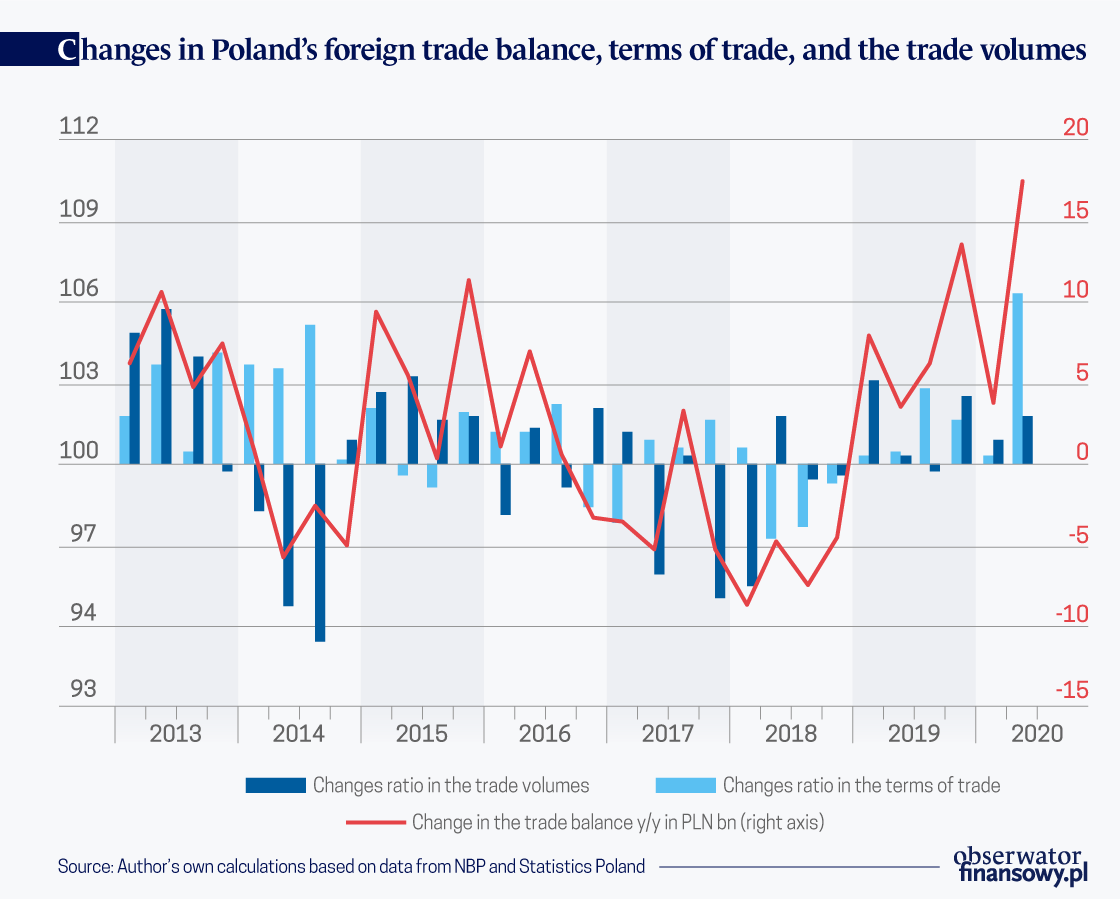 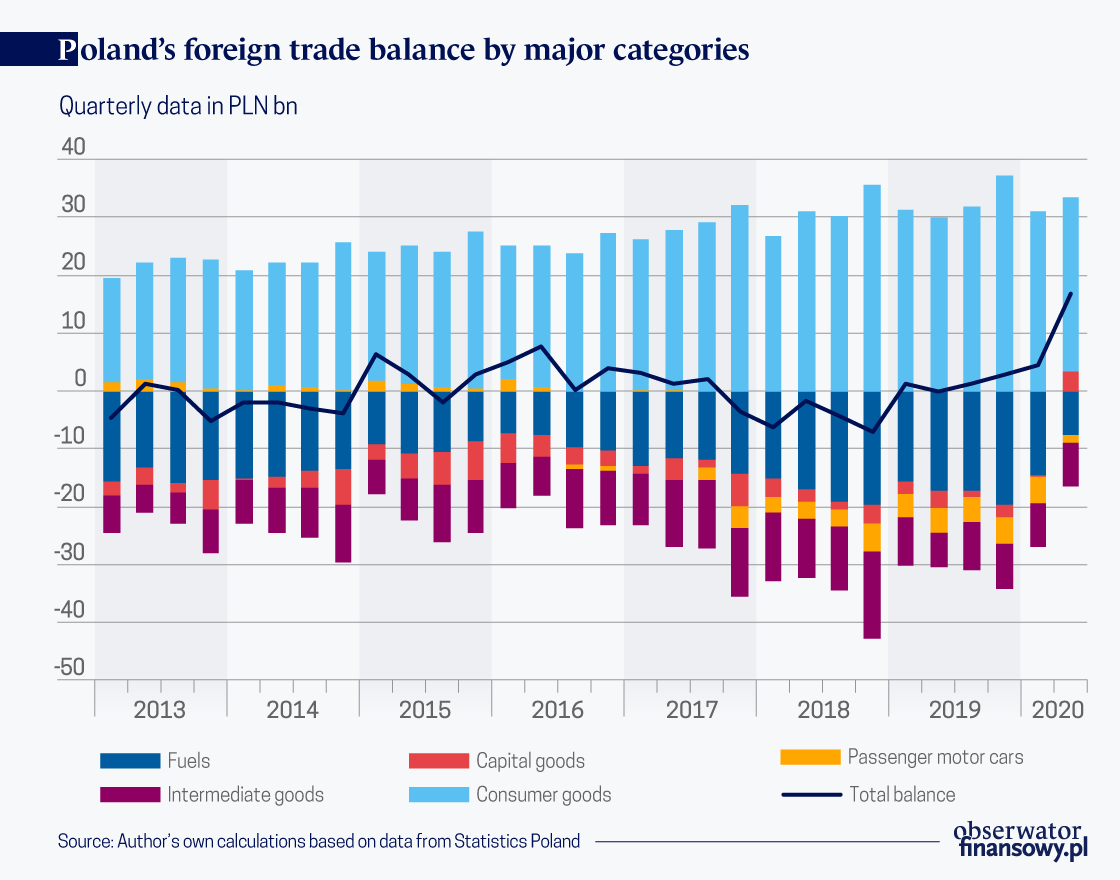 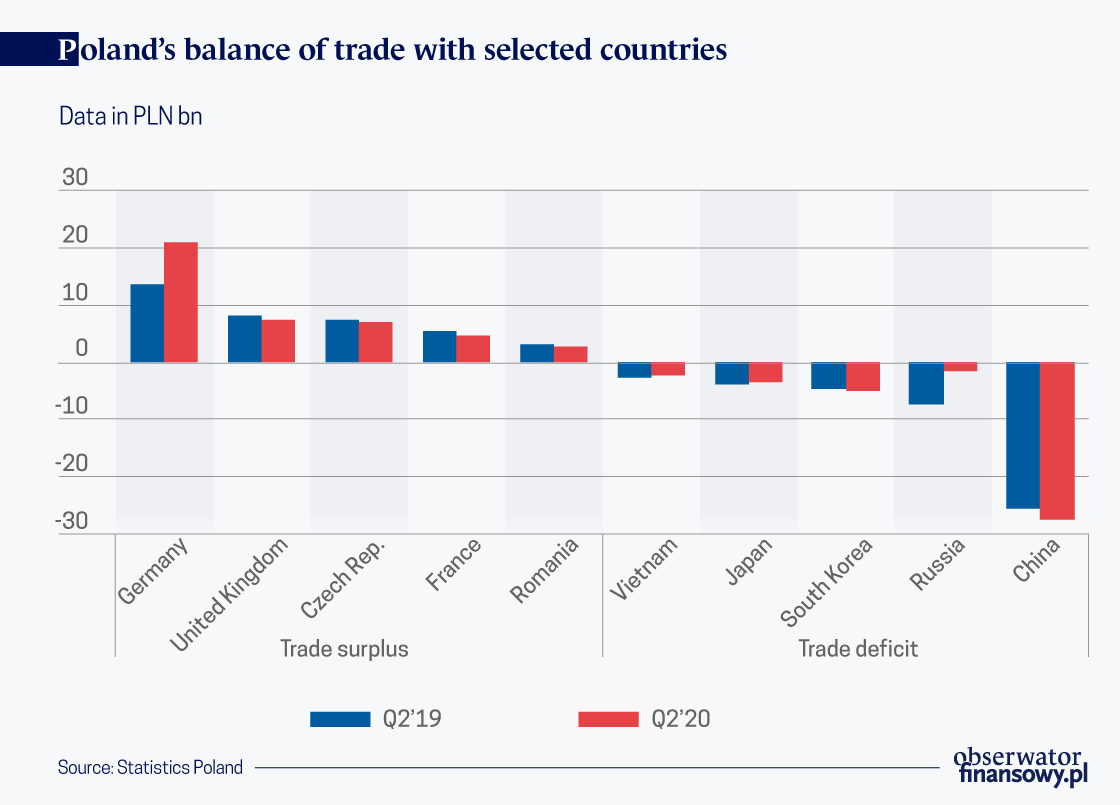