Poland’s share in global imports grows, but mainly in the EU countries

In 2001-2015 Poland’s share in global imports more than doubled, to 1.16 per cent. Only 13 per cent is attributable to non-European imports.

This trend reflects a strong discrepancy between the importance of Poland as a trading partner for the European countries and for other regions. This discrepancy is for the most part the result of specialization of Polish factories in the production of cheaper products intended for the closest markets, which developed under the influence of integration into global value chains (GVC). The increase in Poland’s share in global imports was driven mainly by the producers of durable consumer goods, food and automotive parts. The first two of the above-mentioned categories are also characterized by a high degree of regionalization of markets. The analysis of imports data of the European countries demonstrates a diverging importance of imports from Poland in different countries depending on their distance and prosperity (a reverse relationship) and their size. It is harder to identify the factors that define the share of products from Poland in non-European markets. Generally speaking, these are small transactions performed by narrow groups or even by single companies. Moreover, in Poland, contrary to Western Europe, export to geographically distant markets is not supported by big international corporations, although their presence has significantly increased as a result of the inflow of direct foreign investments.

Suppliers from Poland have a particularly high share of the Central and Eastern European (CEE) consumer durable goods and food market. Poland is the most important supplier of such products to the countries of the Visegrad Group and the Baltic States. In 2015, nearly 20 per cent of imports of the Baltic countries came from Poland in the category of consumer durable goods (including 27.4 per cent in Latvia) and 18.5 per cent of imports of the Visegrad Group countries (including 30.8 per cent in Hungary).

Poland’s share in the import of durable consumer goods increased rapidly in the second half of the previous decade. It was a result of intensive inflow of foreign investments, especially Italian companies, to the household appliances and electronics sector in Poland (the production of the CEE and former USSR countries was transferred to Poland). Strong growth of Poland’s share in the imports of durable consumer goods was accompanied by a sharp decline of imports from Italy, which previously belonged to the main suppliers of consumer durables to CEE countries.

In recent years Poland’s share in imports remains relatively stable in this category. This may be due, on the one hand, to the lower inflow of foreign direct investment to this sector in Poland as well as to the gradual saturation of markets. It can be expected that, as the prosperity of consumers in CEE countries increases, Poland’s share in the import of this product category will gradually decrease.

In recent years, the importance of Poland as a food supplier has been growing rapidly. Poland is the most important food importer for Lithuania (since 2005) and the Czech Republic (since 2015). Moreover, Poland is also an important supplier of consumer durable goods and automotive parts (mainly for factories in the Czech Republic).

In 2015, Poland accounted for 5 per cent of German imports. Between 2001 and 2015 Poland’s share of imports doubled, growing especially fast in the years 2013-15 (on average by 0.4 pp per year). This was most likely related to the shifting of demand in some markets towards lower prices.

Currently, Poland is the sixth largest supplier to Germany (in 2001 it ranked 15th). The value of imports from Poland is higher than that of the USA and China. Imports of consumer durables (2nd after China), automotive parts (3rd after France and the Czech Republic) and food (4th) are of the greatest importance.

Polish suppliers have gained a strong position in the segment of cheaper goods. In 2015 the unit value in the imports of durable consumer goods from Poland constituted only 45 per cent of the level of unit values in imports from other countries. The introduction of goods originating from Poland to the German market was favored by the production of Western European branded goods in Polish subsidiaries and their inclusion in the European sales networks.

On the other hand, Poland has a relatively small importance as a supplier of passenger cars (only 13th position) and capital goods (9th position).

Worse results in the EU-15 countries

Similarly to imports of CEE countries and Germany, Poland has the highest import value of durable consumer goods (5.5 per cent), food (3.2 per cent) and parts for vehicles (3.2 per cent).

An analysis of the data regarding the import of consumer durables shows that consumer wealth strongly influences the geographic structure of the supply. Belgium, France and the Netherlands are characterized by the highest unit value in this category of imports among all EU countries, which may reflect the higher demands of consumers in these markets, also in relation to the scope of services provided in connection with the purchased product.

In these countries, there is higher demand for higher priced products from Germany, the United States and Switzerland. Interestingly, the import statistics of the European Union countries indicate strong variation in the importance of Switzerland as a supplier of consumer durables. For Western European countries, it is one of the most important suppliers (3rd place and 8.5 per cent of EU-15 imports in this category); however, Switzerland is practically absent in the imports of Central and Eastern Europe (21st position and 0.9 per cent of imports of CEE in 2015). This may indicate the impact of market prosperity on supplier structure.

On the Western European markets the products originating in Poland encounter greater competition from cheaper and more geographically dispersed suppliers (mainly from China, Turkey and Mexico). In recent years, the growing importance of these countries has been causing a gradual decrease in the share of products originating in Poland (since 2011). In the case of food, the smaller importance of Polish suppliers in the markets of Western Europe is largely due to the greater distance from the markets. When it comes to food, we observe the greatest disparity between the importance of Poland in CEE and Western European imports. In 2015, Poland’s share of food imports in CEE countries amounted to 17.6 per cent, and 3.2 per cent of imports in EU-15 (excluding Germany).

Geographic distance no longer plays a role in the delivery of vehicle parts. In this case, the relationships within the GVC are very important. An example is Poland’s relatively large share of imports of car parts in Italy.

Poland’s share of imports of non-EU countries is characterized by a high degree of variety. Imports from Poland are relatively significant in Norway (in 2015 they were above 3 per cent). In 2015 Poland was ranked 10th among the largest suppliers to this country. Iceland has a lower share of shipments from Poland (1.9 per cent).

On the other hand, Poland’s share in Swiss imports is the lowest among European countries. In 2015, it was only 0.7 per cent (at the same time Poland was 22nd among suppliers on the Swiss market). On the other hand, Poland’s importance in the imports to the western countries of the Balkan Peninsula is gradually increasing. Serbia and Bosnia and Herzegovina have the highest Polish imports – in 2015 deliveries from Poland accounted for over 3 per cent of total imports of these countries. For Serbia, Poland is the 6th most important supplier of goods. The markets of this region are characterized by strong competition from low-cost countries – especially Hungary (5th place in Serbia’s imports), Turkey and other countries of the former Yugoslavia.

Plenty to the former USSR countries, but imports are not growing

Traditionally, supplies from Poland were of relatively high importance for the former USSR countries. However, unlike other regions, Poland’s aggregate share of imports has not increased in recent years. In 2014-2015 this was due to the sanctions imposed by Russia on the supply of unprocessed food. As a result, the value of imports in some commodity groups, according to Russian statistics, fell to zero. The decline of imports from Poland during this period was far worse than the decrease in total Russian imports, which reduced the importance of Poland as a supplier to the Russian market (from 2.6 per cent in 2013 to 2.1 per cent in 2015). Poland has fallen to 12th position among the major suppliers to the Russian market (from 10th in 2013).

In this group of countries, the deliveries from Poland present the highest importance for Ukraine (in 2015 6.2 per cent of the country’s import came from Poland) and Belarus (3.6 per cent). In 2015, Poland was the fourth largest supplier of goods to the Belarusian market. 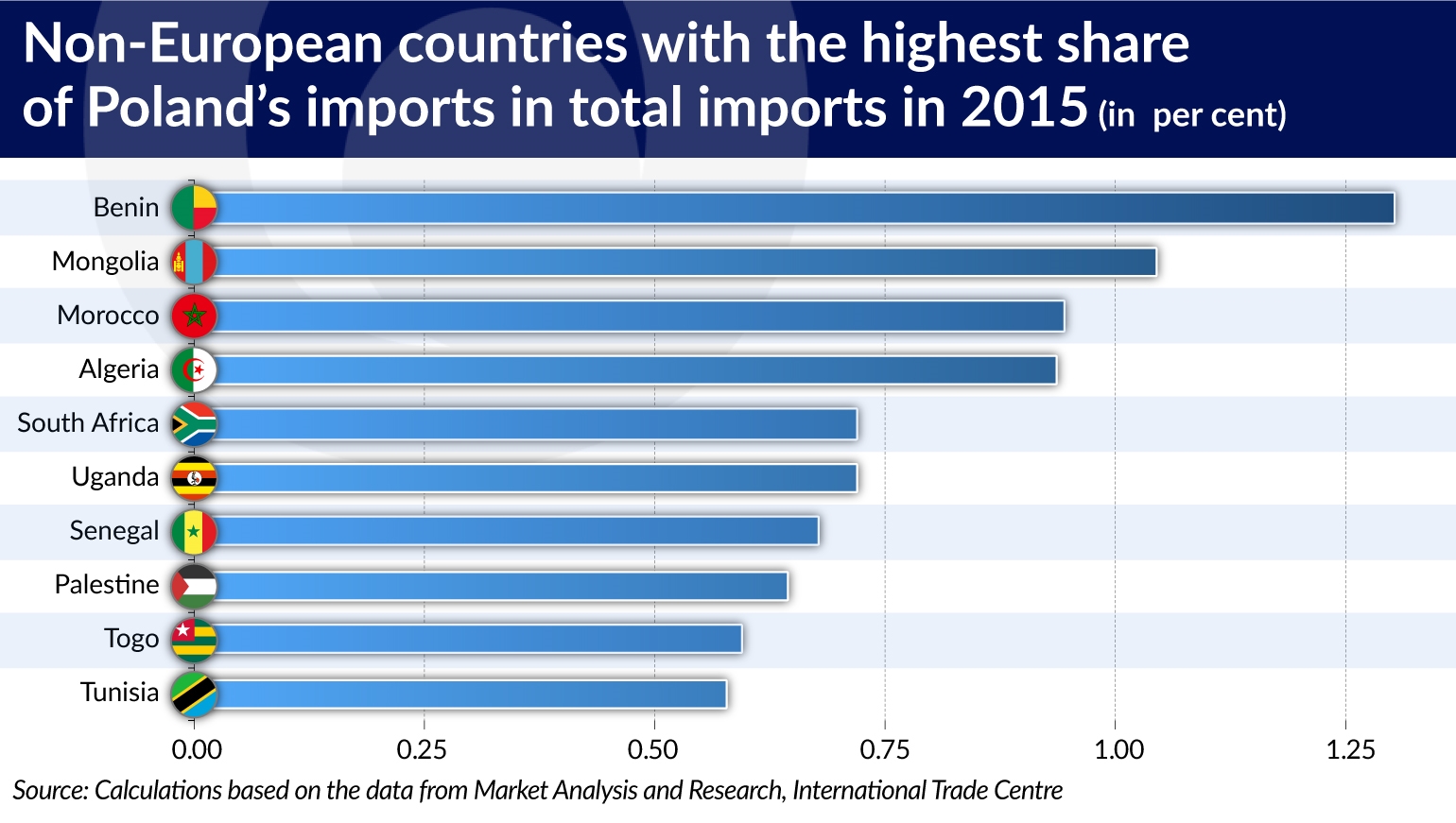 In 2015, only 0.24 per cent of imports to non-European countries came from Poland. In comparison with European markets, the significance of Poland was over ten times smaller. The disproportion between Poland’s share in imports of European countries and other countries has been gradually declining in recent years. However, it remains significantly higher, for example, than in Western Europe. This reflects a strong concentration of Polish exports on the European markets.

Polish products have the highest share in the imports of African and Middle East countries and relatively small share in North and South American countries. In 2015, Poland was the 40th largest importer in the United States (0.25 per cent of US imports). 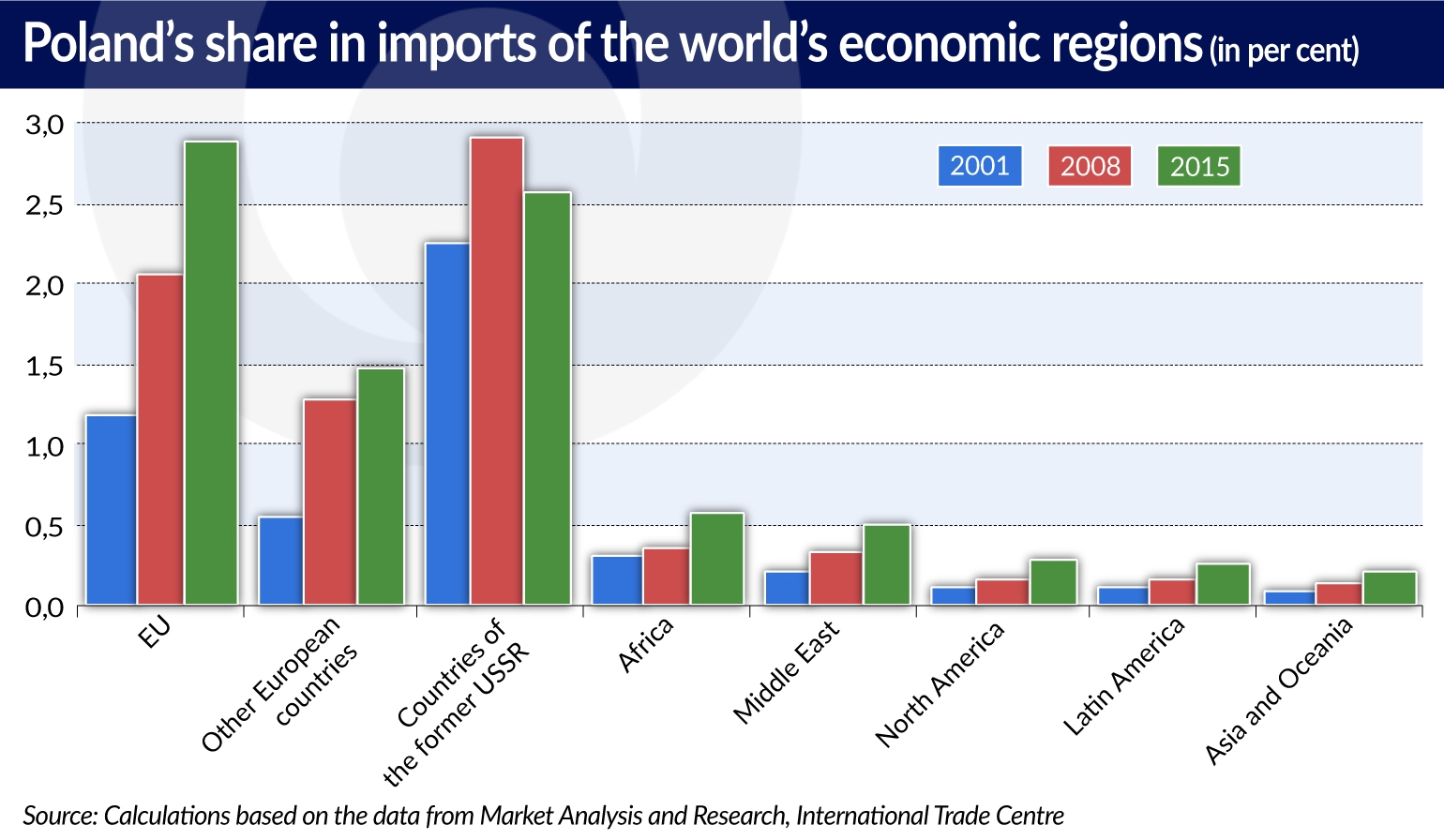 Goods originating in Poland have the smallest importance in the imports of Asian economies’. In 2015, imports from Poland amounted less than 0.2 per cent of the imports of this region. This is mostly caused by an insignificant presence of goods originating in Poland on the largest markets of this region, i.e. Japan (47th position in 2015 in terms of import value), China (57th position) and India (59th position).

An analysis of the import data for individual European countries indicates that the size of the market also has a significant impact on the diversification of suppliers. In the markets of large developed European countries (Germany, France, United Kingdom and Italy), where the structure of consumers is more diversified, lower price segments are more important than in the smaller economies (e.g. Switzerland, Belgium, Ireland).

Taking into account the relatively small size of Polish exports to non-European countries, the importance of Poland in most of these markets seems to be dependent on the actions of individual companies.

Wojciech Mroczek is an economist in the NBP Economic Analysis Department.