The Visegrad Group countries export the least outside Europe

The supra-regional demand for products manufactured in a given country indicates high non-price competitiveness of exporters.

The European Union countries are characterized by a very high share of regional trade. Thus, the degree of geographical diversification of exports reflects the importance of non-European economies.

Adopting the share of non-European destinations in exports as the yardstick, one reaches the conclusion that Polish exports are characterized by relatively low non-price competitiveness in comparison to other EU countries. In 2016, Polish exports to non-European countries constituted less than 10 per cent of its total volume, while the average share of such geographically distant markets for the EU was almost three times higher. Additionally, the share of non-European markets in Polish exports has remained almost unchanged since 2014, having previously experienced a gradual increase between 2008 and 2013.

The ability of these economies to create exports to geographically distant countries is linked to the large share of foreign trade among the biggest global companies. In other Western European countries, the importance of non-European countries varied around 26.1 per cent. The lowest share was recorded by the Visegrad Group countries (only 9.6 per cent  on average). 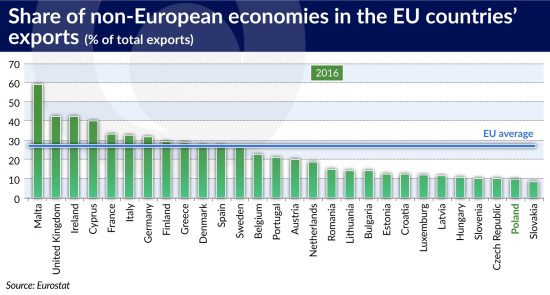 It is the strategies of international corporations that basically determine the low share of geographically distant markets as recipients of exports from Poland and other countries of the Visegrad Group (V4).

Firstly, corporations, when including companies from Central and Eastern Europe in the global value chains, shifted to this region primarily the production of goods destined for the lower segments of nearby markets (i.e. Western Europe, Eastern Europe and the former USSR countries) in order to increase the price competitiveness of the offered products.

Secondly, the expansion of international corporations increased the intensification of trade in parts and processed goods between the European Union countries, including primarily the Central European countries. Polish companies are suppliers of parts and semi-finished products mainly to European countries (in the case of Poland the so-called forward participation, i.e. the cooperation involving the supply of parts within the Global Value Chains (GVC) has a very regional character, while the backward participation, and therefore the use of imported parts in export production, has a largely global character).

In the case of final goods, the relative importance of transport costs to distant markets means that they are not competitive with their close substitutes manufactured in Asia or South America. At the same time, companies in parent countries, and therefore mainly in the largest Western European countries, can make greater use of production capacities to produce more innovative goods, which, because of the low possibility of substitution, find customers in distant geographic markets.

This is reflected in the fact that the most striking differences between the largest EU countries on the one hand and Central European countries on the other with respect to the share of non-European markets in exports are being concentrated in those very sectors where foreign trade is dominated by large corporations. 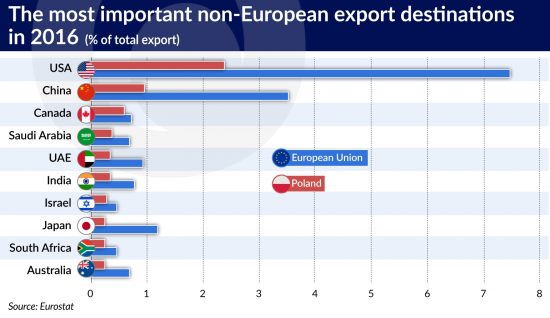 The United States is also the most important non-European market for other European Union countries. USA is the largest export market for Germany, the United Kingdom and Ireland, the second largest for Austria, and the third largest for France, Italy, Denmark, Finland and Sweden.

All in all, twenty EU countries count the United States among their top ten export destinations. In 2016, 7.5 per cent of total EU exports were to USA (both external and internal). On the other hand, the US is clearly a less important export market from the Central and Eastern European perspective.

The share of China and Canada in Polish exports does not exceed 1 per cent. The share of other countries is below 0.5 per cent of total exports. Interestingly enough, today the third largest importer of Polish agricultural products is Saudi Arabia.

One of the consequences of the low importance of non-European economies as Polish export destinations is the high trade deficit with this group of countries. In 2016, their share in Polish imports amounted to 27.6 per cent (according to the statistics by country of origin). A systematic increase in the share of these countries in imports has led to a widening of the deficit. In 2016, the deficit in Poland’s trade with non-European economies exceeded 7 per cent of GDP.

Wojciech Mroczek is an economist in the Poland’s central bank NBP in the Department of Economic Analysis. 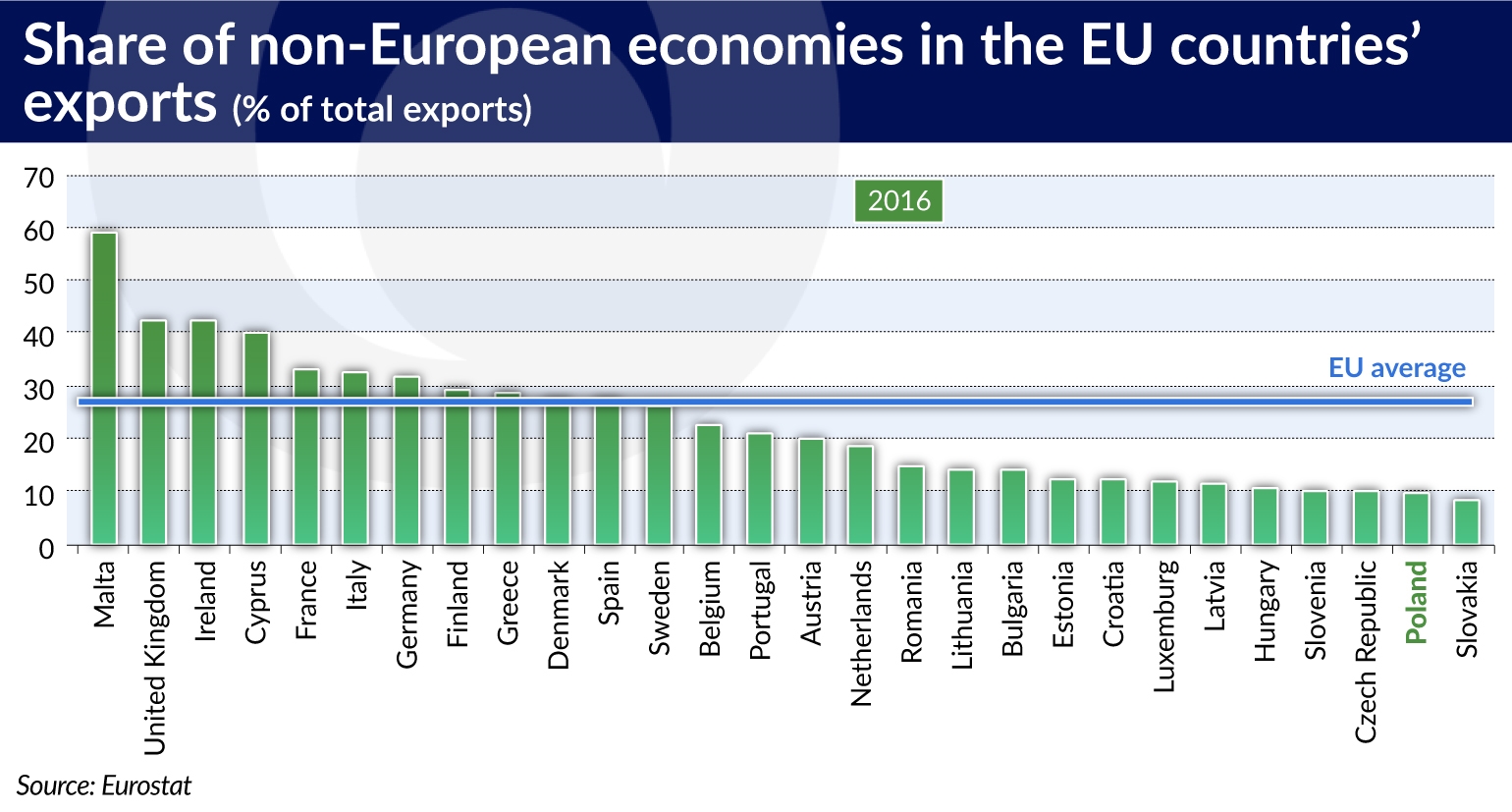 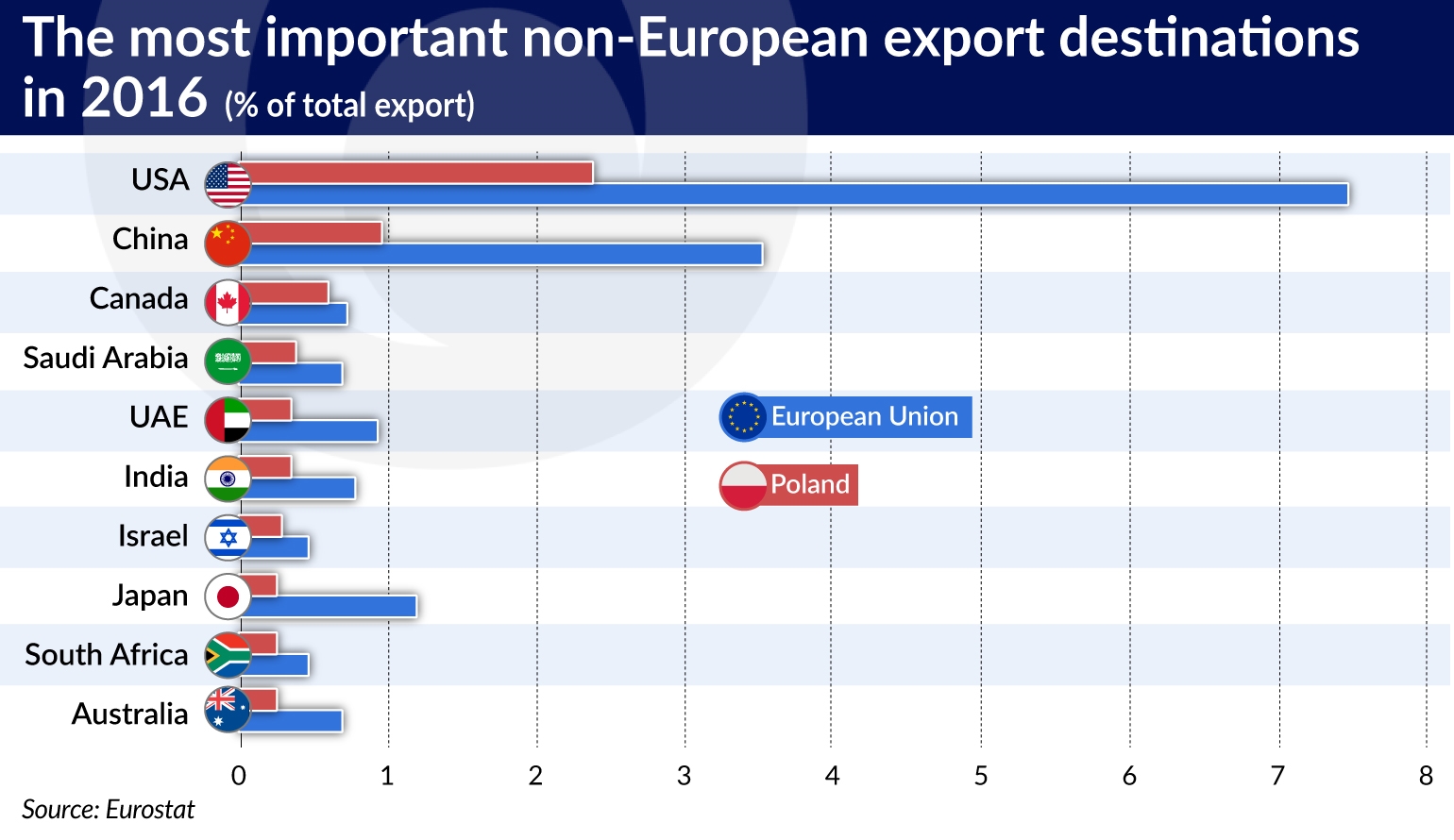