Without reforms Belarus’s economy will stagnate

To heal the economy, Belarus needs to speed up its transition to a market economy and boost reforms, no matter how challenging from a political, social and economic perspective. The government has already given its consent to adopt certain changes and now needs to be consistent in pursuing them.

There are some reasons to suspect that 2016 will be a breakthrough year for the Belarusian economy. In 2015, the government adopted some tough reforms aimed at adjusting the economy to global conditions and fighting inflation. The National Bank of Belarus tightened monetary policy, liberalized the exchange rate regime and President Alexander Lukashenko in his presidential campaigned promised a conservative fiscal policy. The government took the unpopular step of increasing charges for communal services like heating and water —  required by the International Monetary Fund to start negotiations over an USD 3m loan. More on the reforms here.

This all looks promising for the future, but it’s going to be a long slog.. After a couple of years of slow growth, the country was back in recession in 2015– GDP fell by 3.9 per cent. The downturn was a surprise because many believed Belarus had recovered after 2011, when inflation topped out at an annual 108.7 per cent. The government subsequently announced a series of reforms. 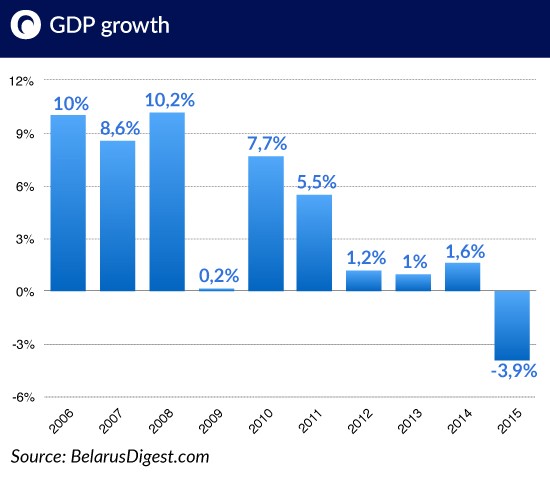 Since 2014, Belarus has been trying to modify its economic policy. First, new members joined the  National Bank and the bank started to combat inflation more actively. The bank also moved to a flexible exchange rate and monetary targeting, which can help  stop the continuing depreciation of the Belarusian ruble. The challenge is stark — currency reserves are at the lowest level since 2011, on January 1, they amounted to USD 4.2bn. Any economic shock could leave the central unable to stabilize the situation, setting off another currency crisis. That is why the IMF loan is so important.

No matter how painful, reforms cannot be avoided — the most urgent concern privatization, the social security system, spending cuts and incentives for international companies. When asked to develop on this list, Aleś Alachnovič, ‎vice president at CASE Belarus said: “Small privatization (the privatization of small and medium state-owned enterprises and sale of idle assets of large state-owned companies); further restructuring of state-owned enterprises (among others the introduction of professional management and supervisory boards to large companies); de-monopolization of the economy (Belarus at the national level does not yet have functioning anti-trust authorities and agencies of consumer protection); attracting foreign investments; reform of the labor market[(at the moment unemployment assistance is negligible, which creates barriers to mobility and discourages workers from leaving their current job to find more effective on).”

Speeding up privatization is a key goal since state-owned enterprises only keep working thanks to public loans and subsidies and are ineffective. The State Property Committee  announced a list of companies selected for privatization in 2016 (56 of them are open joint stock companies and four enterprises as asset complexes). The government assures the privatization program is designed to see 90 per cent of state-owned businesses transferred to private sector ownership. That’s a very ambitious plan for the last non-market economy in Europe. The problem is that Belarus has announced similar programs every time there’s a risk of a cut in subsidies from Russia. This is what is happening now – because of its internal problems, Russia is unable to support its allies. Second, previous programs have been disappointing.. When privatizing significant  companies, the state tries to retain a controlling stake. This was very clear in Belarus’s 2011-13 privatization plan, in which a lot of mistakes were made and which was perceived as a tool aimed at getting rid of unprofitable organizational units rather than liberating the market.

Alaś Alachnovič is also skeptical about the program. “I would not call this an ambitious privatization plan. The total value of companies to be privatized is less than USD 0.5bn – not much when compared to the Belarusian GDP. Such lists have been published before and were not a resounding success, because there was no real desire to privatize. Now the situation has changed and authorities are beginning to see the need to get rid of part of state assets and to create a more favorable business climate for domestic and foreign investors.”

The agricultural sector is deeply insolvent and ineffective. 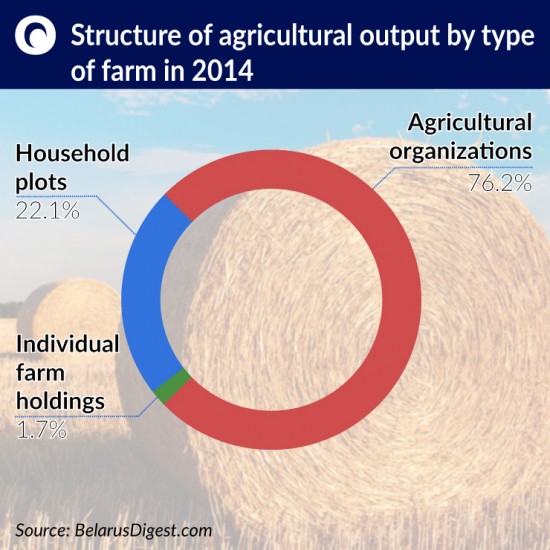 For 25 years there have been no serious attempts to reform the sector and big collective organizations are still privileged over private farmers. Private farming has been steadily shrinking. In 2015 there were 20 per cent fewer individual farmers than when Lukashenko came to power in 1994 – despite the experience of other post-Soviet states that the less governmental control over farming the better. This is an absurd situation – even when highly supported, the agriculture sector brings losses. How can other branches do better?

The Eurasian Economic Union was supposed to enhance the economies of its member states, but so far Belarus has failed to gain much from this project. As a result of a too slow reduction of a number of trade tariff exemptions, its trade with other EEU states fell by third. The Union is not an economically liberal organization, as it tends to concentrate on politics. 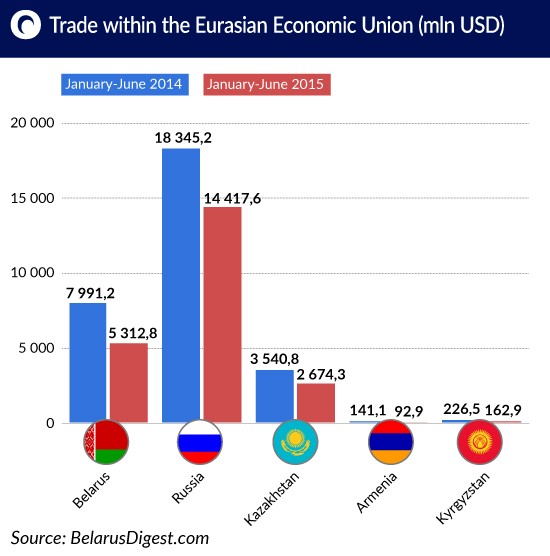 In fact Belarus would have done better to stay out of the Union. The Union is considering abolishing the duty-free export of cars produced. Should that happen, Belarus would be adversely affected and the sense of some international company (Peugeot, Citroen) assembly plants would be questionable.

When making forecast for following six months, analysts from Belarusian Institute for Strategic Studies say: “The recession in the Russian market and changes in terms of trade within the EEU brought about by Kazakhstan’s accession to the WTO – subject to the introduction of two parallel customs tariffs – will cause tensions in Belarus’s relationships with its EEU partners. The war of sanctions between Russia and the West will remain an additional reason for conflicts.”

On the other hand it would be beneficial for Belarus to become a member of the World Trade Organization. Negotiations on joining started in 1993, but there is still no accession date. If it joined, Belarus would benefit from higher export opportunities, higher security for major business transactions and participation in dispute-settling procedures. The main negative consequence would be the cancellation of state assistance for exports, the need to make tariff concessions and easier access of foreign competitors to domestic market.

Since all of Belarus’s partners are already WTO members (Ukraine from 2008, Russian from 2011, not to mention European Union countries), there is no reason why it should prolong the negotiation process. The talks have taken so long because Belarus of the huge role of the state in the economy and its failure to liberalize the market. Most agricultural firms couldn’t operate without subsidies (in 2013, according to study by the Economic Research Institute of the Ministry of Economy, only 10 per cent could do without them).

Higher duties to strengthen the economy

The Belarusian government tried to boost domestic production by imposing duties on foreign goods. A special decree issued in mid-February now applies duties to travelers bringing in goods worth more EUR300 per quarter.

The new decree also limits the value of shipments from abroad that can be imported duty-free. Instead of a monthly limit of EUR 200 weighing up to 31 kg, the limit is now EUR 22 and 10 kg. Articles exceeding these limits will be subject to a duty of 30 per cent for each extra kilogram, but not less than EUR 4.

The new regulation (the decree will come into force two months after its official publication) is aimed at stimulating domestic production and consumption. Another reason is to reduce smuggling — Belarusians, particularly those living in border districts, take advantage of price differences between Belarus and EU countries. The government also attempted to curb this type of trade in August 2014.

Belarusians did not welcome the decree, and it will also have negative effects in the border districts of Poland and Lithuania. In 2014, Belarusians spent EUR 750m in Poland, although that fell in 2015 because the ruble’s depreciation , which affected purchasing power. The new regulation will also hit online shops, which have gained great popularity in recent years. Based on data by  the Belta news agency , in the past two years the amount of commercial goods  imported through online stores increased 6-fold. Last year, more than 250,000  citizens received from 10 to 100, and even more parcels from online stores. Authorities say most of them were not for private purposes, but for further sale, justifying the measure.

There is a lot to be done. The election year is over so it’s high time to take up serious measures to introduce necessary reforms. But even if the government decided to introduce a full-scale reform program, it is unlikely to avoid a further recession. The Research Center of the Institute for Privatization and Management has presented macroeconomic forecast for 2016 entitled:  “No end of the recession in sight.”

“In 2016, the recessionary environment is likely to persist, because of permanently depressed investment demand. Decreasing employment will be one more permanent attribute of this macroeconomic development path,” states the report.

Alachnovič, who also predicts recession in 2016 and stagnation in the following year, says, “Belarus lacks the political consensus to carry out radical market reforms. The current reforms are too limited and too slow to bring the economy out of recession in the coming year.”

Another problem is rising unemployment. In 2015, the number of unemployed increased by 19,100 people. The main reason is mass layoffs in industry, construction and agriculture. On January 1, 2015 the unemployment rate was 0.5 per cent, one year later it was already 1 per cent. Industrial production is expected to continue declining in 2016 as there is no sign of an improvement in the  economic situation. If negative economic trends persist, the unemployment may triple. Given almost non-existent unemployment benefits (around USD 10 a month) and the requirement to perform mandatory community service to receive it, the situation of many residents (especially young people) could worsen within the next year.

No schedule for reforms has been published so far. The first change Belarusians will experience will be a currency redenomination on July 1, under which 10,000 ‚old’ rubles will become one new ruble.