The global economy consumes much more resources than it is able to replenish or reuse. The issue of decoupling economic growth from the consumption of resources is becoming a key element of the development policies in many countries.

Since the days of the industrial revolution, the world has been developing in a linear model based on the exploitation of resources and the production of an ever greater amount of waste. This is due to the growth of the population, the accelerating pace of urbanization, and the resulting expansion of the middle class with high consumption aspirations. One third of the global GDP will be needed to satisfy these aspirations in 2030.

Humans are already consuming 1.6 times more resources than the planet’s regenerative capacity. This means that with each passing year every country is getting into an increasingly large ecological debt, or „borrows” resources from the future. The size of this debt is measured using the so-called Earth Overshoot Day. This indicator, developed by the Global Footprint Network, measures the population’s demand for natural resources and the ability to replenish them.

We are producing a lot of garbage

Last year, the Earth Overshoot Day fell on August 1st. This means that by this date the world had already consumed all the natural resources that the Earth’s ecosystems can regenerate in the given year. Poland, like many other developed economies, reached the Earth Overshoot Day on May 19th. In Russia the estimated overshoot date fell on April 21st, while in Vietnam — which has only entered on the path of development — it fell on December 21st.

The resource intensity of the economy is constantly growing. At the beginning of the century, it took an average of 1.2 kilograms of resources to generate USD1 of the global GDP, and just ten years later this figure jumped to 1.4 kilograms. The volume of global annual waste generation is also growing rapidly — according to the World Bank in 2016 it reached 2.4 billion tons. If nothing changes, waste generation is expected to jump to 3.4 billion tons by the middle of the century, and the rate of waste creation will exceed the rate of demographic growth.

Therefore, there is an urgent need to decouple economic growth from the consumption of resources and to move to a circular economy based on the replenishment or the recovery of resources, the use of goods and not their possession, and a much more extensive use of waste than at present. Entering such a path of development could provide multi-dimensional benefits. According to a study by BCG, by 2030 the circular economy could generate additional USD4.5 trillion of the global GDP, providing food and social welfare opportunities to 8.5 billion people.

Meanwhile, McKinsey estimates that in Europe this would translate into an additional 7 per cent growth , while the disposable income per capita would increase by 11 per cent by 2030. Almost 100 per cent of the surveyed representatives of large, multinational companies are convinced, that innovations related to the circular economy will allow them to become more competitive in many areas.

Only waste processing can save us

A number of programs and directives have been implemented by the bodies of the European Union — the document entitled „Closing the loop. EU plan for the Circular Economy”, referred to as the Circulation Economy Package, was released in 2018. The implementation of its principles (including the strategy for plastics) would bring savings of USD630bn to the economies of the EU member states, which corresponds to approximately 3 per cent of the GDP. This and earlier documents (such as the Environmental Action Program) indicate, that the main goal is to reduce the amount of waste production per capita.

Thus far, the effects of the implementation of these programs can hardly be considered satisfactory. In 2016, the average annual generation of waste (excluding major mineral wastes) in the territory of the European Union amounted to almost 1.8 tons per capita, and was 5.1 per cent higher than at the beginning of the present decade. However, there is a clear trend of shifting away from the landfilling of waste (whose share decreased from 28 per cent to 24 per cent) toward its processing and incineration.

On the other hand, the share of secondary waste has increased (from 12 to 18 per cent). Municipal waste accounted for one quarter of all waste generated, amounting to 480 kilograms per person, which is almost 50 kilograms less than at the beginning of the decade.

In the case of Poland, the average amount of municipal waste generated per capita amounted to 320 kilograms only, as this type of waste is of much less of a concern than in the EU on average (only 8 per cent of total waste). Overall, in the European Union, an average of 30 per cent of municipal waste is processed, while 27 per cent is incinerated, 25 per cent is landfilled and 17 per cent is composted. However, Poland, along with 13 other member states, received a „yellow card” from the EU authorities for the ineffective implementation of the household waste management system.

The Circular Economy is a part of the United Nations’ Sustainable Development Goals. Poland is currently ranked 32nd in the world (slightly better than China) when it comes to the progress in their implementation. The Scandinavian countries, Germany and France are leading the ranking.

We consume too many resources

Poland has a lot of potential in the area of reducing waste production and improving waste management. Unfortunately, the country ranks the third among EU member states when it comes to resources consumption (at present, only the economies of Germany and France, which are seven and five times larger, respectively, consume more resources than Poland), with resource efficiency 3.5 times below the EU average. Poland is the leader in terms of the use of fossil fuels, which are the source of almost 90 per cent of energy consumed in the power industry, in transport and in heating. As a result, the Polish economy is almost two times more energy-intensive than other EU member states. Poland also accounts for 9 per cent of greenhouse gas emissions in Europe.

The process of waste management in Poland is not very effective, and most of waste (45 per cent) is generated by coal mining and metal ore mining. More than a third of the waste coming from fossil fuels combustion is still landfilled. In a cross-sectional study conducted by Deloitte, the degree of so-called circularity of the Polish economy was found to be moderate. This indicator measures the ratio of the recycled materials to their domestic consumption. It is slightly higher than the EU average (12.5 per cent), but leaders (such as the Netherlands) recycle over 25 per cent of consumed materials on average.

Poland performs best in industrial and construction waste recycling (68 per cent), while the amount of such waste produced in Poland per capita is 50 per cent lower than the EU average. Meanwhile, municipal waste recycling reached the level of 43 per cent. Poland also meats the target for the collection of waste electrical and electronic equipment set out by the EU Directive (45 per cent).

The draft road map for the circular economy, prepared in the years 2015-2018, was submitted for inter-ministerial consultations a year ago. The main areas covered by the document include sustainable industrial production, consumption, bioeconomy and new business models. The Circular Economy at the local level is also covered by the pilot program of the Ministry of the Environment and the National Fund for Environmental Protection and Water Management in the municipalities of Łukowica, Tuczno and Wieluń. As part of the program, municipalities, companies and private individuals can apply for non-refundable subsidies and loans for projects related to the broadly defined „resource efficiency” and education (the total amount available is PLN45m, EUR10.5m).

The potential that lies in waste management

More and more companies are learning of the benefits of the circular economy. One of them is Adamed Pharma S.A., which is implementing the „zero-loss” principle in the area of waste management. This allowed it to cut costs of industrial waste disposal by over 60 per cent, and costs of municipal waste disposal by 30 per cent.

It turns out that even small changes in waste management have great potential benefits. Deloitte’s calculations indicate that a 1 per cent reduction in materials and energy consumption in all sectors of the economy creates the opportunity to achieve the total added value of PLN19.5bn (EUR4.6bn) per year. The greatest potential for cost savings lies in the sectors of bioeconomy, construction and transport — savings resulting from a 20 per cent reduction in the consumption of materials and energy if reinvested, would translate into PLN167bn (EUR39.03bn) of additional GDP.

The transformation of a linear economy into a Circular Economy will require not only greater material efficiency, and the associated shifting of production factors to the more productive areas. It will also be necessary to create entirely new value chains linking market players, but also public entities. This is also a highly innovative process, requiring a different way of product design, in accordance with the Cradle-to-Cradle Design, which was used in the Park20/20 commercial building complex in the Netherlands. Its structure consists of smart buildings with reduced mass. They can be easily dismantled, and components may be used to build other structures or biodegraded. However, such measures should be preceded by a comprehensive diagnosis aimed at assessing the needs and capabilities of the economy. That will be the way to building an appropriate strategy, which cannot be limited to waste management only.

There are many important barriers of psychological nature that have to be overcome. Initiatives and programs promoting circular economy are perceived as low-profit potential projects and therefore lower priority tasks. Moreover, many companies and private individuals are distrustful when it comes to information concerning ecological threats.

It is therefore necessary to promote a new approach to the economy. One example of such activities was the „Circular Economy Week” organized in October 2018 in several cities in Poland. “One of the objectives of that project was to show, that sustainable consumption is already possible,” said Katarzyna Dulko-Gaszyna of Ikea. Various people or even celebrities should become involved in the efforts to change the prevailing attitudes.

Sometimes a good example is the best way to educate people — during the festivities celebrating the Finland Independence Day, the wife of the President of Finland received a lot of attention from the media, because she wore a fully-recyclable gown which was made of birch wood with the use of advanced technologies. Considering the fact, that every second the equivalent of one garbage truck of clothes is thrown away, we must acknowledge, that the issue of circular economy is of concern to all of us.

Category: Business 30.09.2019
Deputy Minister of the Environment Slawomir Mazurek said the government would be hard on illegal incineration of waste in Poland. Prime Minister Mateusz Morawiecki even threatened to ban the import of waste until the system was adapted to achieve its goals. 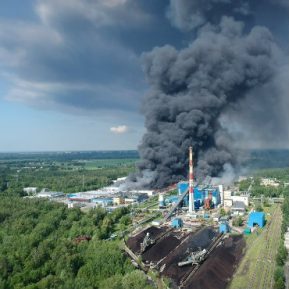