The history of the Polish zloty began almost 500 years ago

15.08.2018
The ducat introduced in 1528 by King Sigismund the Elder can be considered as the first Polish zloty. Since then, even for ordinary people it is important what money they use to pay for things, says Marcin Madejski. 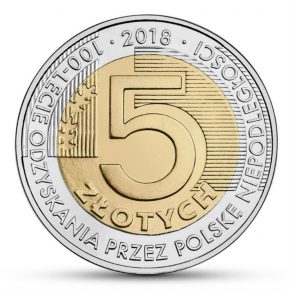 CE Financial Observer: On May 22nd, 2018, Poland’s central bank (NBP) put into circulation a PLN5 coin with the inscription „100th anniversary of regaining independence by Poland”. The total mintage of 38 million 424 thousand pieces is equal to the number of Polish citizens. Has any central bank ever done anything similar?

The coins commemorate the centenary of independence, but the zloty itself is only 94 years old. Where does that difference come from?

Indeed, the origins of the Polish zloty in the 20th century date back to 1924, and the reforms of Władysław Grabski (read more). However, documents providing the creation of Bank Polski and the introduction of the Polish zloty as the new currency that would replace the currencies of the partitioning powers, were already signed in 1918. What’s more, the printing of banknotes was launched in Great Britain and in France. These banknotes carried the issuance date of 1919 and were waiting in the vault for the organization of Bank Polski and for Grabski’s reforms. The creation of the Polish zloty simply preceded the organization of the bank that was supposed to issue it.

You’re talking about the origins of the Polish zloty in the 20th century. But the name zloty probably has deeper roots?

The origins of the zloty can be traced back to the 16th century, when King Sigismund the Elder carried out his monetary reforms. They were completed in 1528, when the zloty entered into circulation. It was a unit of account with a name referring to the ducat minted from gold and commonly referred to as “zloty” (meaning golden in Polish). The zloty was divided into 30 grosz, because the grosz units were already in use before that. So in 1528, King Sigismund the Elder minted ducats, but their value exceeded 30 grosz, initially reaching the 34 grosz and increasing further in subsequent years.

Other researchers believe that the first zloty was the so-called the “półkopek” coin (half-threescore) of Sigismund Augustus, because that was the first coin on which the denomination of 30 grosz – corresponding to one zloty – was struck. There are some doubts however – can a coin from a Lithuanian mint, struck according to the local minting rate, really be called a Polish zloty?

Still other researchers believe that the first zloty was the tymf coin, minted during the reign of King John Casimir Vasa. This was a coin with a face value of 30 grosz, issued in an economically difficult period after the end of the Polish-Swedish wars. The silver content in the coin’s alloy was reduced and its real value was equal to 16 grosz, so it was really a half-zloty.

And in your opinion, which coin was the first Polish zloty?

I’m leaning towards the opinion of Prof. Stanislaw Suchodolski, who — on the occasion of NBP’s issue of collector coins from the “History of the zloty ” series — wrote that the ducat introduced by Sigismund the Elder in 1528 was the first Polish zloty, even if it really was worth more than 30 grosz. This interpretation is worth accepting, if we want the zloty to have a long history. Otherwise, we would have to move to the times of the Kościuszko Uprising (late 18th century), when the name “zloty” appeared for the first time on coins and on the first Polish banknotes, or the Treasury notes.

And when was the first time that Polish citizens held in their hands regular banknotes and coins carrying the name “Polish zloty”? Was it 1924?

No, back in the 19th century, during the period of the Kingdom of Poland, banknotes and coins with the name zloty were introduced. After Poland regained independence, the zloty was reintroduced. However, as I’ve already said, the banknotes were in fact produced in 1919, while the coins were only minted by the end of 1924. An interesting fact is that the banknotes were issued by Bank Polski, while the coins were issued by the State Treasury, which gladly utilized this ability.

The 1 zloty banknote from 1919 depicts Tadeusz Kościuszko, while the coin carries the image of a woman. Was she someone special?

This was an anonymous female hand reaper in a headscarf on the background of grain field. In 1932, a new image appeared on the coin, depicting a woman wearing a wreath, with grain spikes arranged radially around her. This was Polonia, the personification of Poland, designed by the excellent sculptor and medalist Antoni Madeyski.

There was a possibility that instead of the zloty, we would have a currency named “lech”. Other options were also considered.

That’s right. On February 5th, 1919, the Chief of State Józef Piłsudski issued a decree on the monetary unit of the Polish currency, in which the name “lech” was mentioned. This name was also included in the draft law presented to the Sejm by the Minister of the State Treasury of that time. The Sejm adopted the proposed law on February 28th, 1919, but the name “lech” was changed to “złoty”. Other names were also suggested in the debate – piast, kościuszko or szczerbiec. Ultimately, however, perhaps due to the historical memory, the decision was made that Poland’s currency would be the Polish zloty, for the first time divided into 100 grosz.

Where did that change come from?

I suppose that the purpose was to facilitate counting. It should also be remembered that it was the reform of Sigismund the Elder that established the exchange rate of the zloty at 30 grosz, and that it resulted from the relation between the value of silver and gold.

And what was the most expensive Polish coin?

That would be the coin with a face value of 100 ducats from 1621. In January 2018, it was sold at an auction in New York for USD2,160m. It is one of only six preserved coins minted to commemorate the victory over the Turks in the Battle of Khotyn.

Even more rare are medals minted for special occasions on the king’s order. I can only speculate that the most valuable Polish numismatic item – if it was ever available for sale – would be a medal weighing more than 300 ducats, which commemorates the conquest of Smolensk by Sigismund Vasa. The only existing piece is held by a museum in Vienna.

Are banknotes also interesting for numismatists?

For over half a century, all the banknotes in Poland have been designed by one man – Andrzej Heidrich. In his biography, he mentions that there was a period when he was struggling to keep up with the workload, because the denominations were so fast.

Inflation was a problem at the beginning of the 1990s, during the transition from a communist economy to a free-market economy. That is why subsequent banknotes were entering circulation: 50,000, 100,000, 200,000, 500,000 zloty, and finally 1 million zloty, with Wladislaw Reymont (novelist and Nobel Prize for Literature winner) and 2 million zloty with Ignacy Paderewski (Polish pianist and composer, and spokesman for Polish independence). A banknote with the denomination of 5 million zloty with Piłsudski had being prepared, but after inflation stabilized, a redenomination was carried out in 1995 and that banknote was never put into circulation. These were the last pre-redenomination banknotes from the “Great Poles” series, which were in circulation from 1975 to 1996.

And which started with a banknote depicting Tadeusz Kościuszko, just like after Poland regained independence.

That’s right. One interesting fact is that there were three designs prepared for the banknote inaugurating the “Great Poles” series: Kościuszko, Fryderyk Chopin and Maria Skłodowska-Curie. She, the Polish Nobel Prize winner, was supposedly rejected by the First Secretary of the Communist party himself. The design with her image returned in 1989, as a circulation banknote with a face value of 20,000 zloty.

The banknotes introduced after the redenomination were also prepared by Andrzej Heidrich. Did he have any competition?

He had competition from the very beginning. It started in 1960 with a competition for a banknote with a face value of 1,000 zloty. The first place was not awarded at all, and a banknote designed by Pałka and Tomaszewski entered into circulation in 1965. It was supposed to be a banknote initiating a new series, but I have no knowledge as to why this project wasn’t pursued. The fact is that when the authorities returned to the idea of a new series in the 1970s, talks were held with Andrzej Heidrich, who also participated in that competition.

A similar story repeated itself with the redenomination. Discussions concerning the need to suppress inflation were already carried out in the second half of the 1980s, and on this occasion a series of banknotes with Polish cities, designed by Waldemar Andrzejewski, was even printed in Germany. After the fall of communism in 1989, the opening of borders facilitated our access to new technologies, and it turned out that the security features of these banknotes were insufficient. They never entered into normal circulation. Instead, we started paying – as we still do to this day – with the banknotes from the “Rulers of Poland” series designed by Andrzej Heidrich. The latest of these is the PLN500 banknote with King Sobieski, introduced into circulation in 2017.

Do you think it’s important for people who are not numismatists what money they use to pay for things?

I think that it matters, because it is associated with a sense of national identity. It is known that a coin or a banknote should carry an indication of where they come from. In the past, this was further strengthened by the image and the coat of arms of the ruler. If the coin was a good coin, i.e. the issuer did not cheat on the metallic ore content, then users could even feel something in the way of pride. Even today, with paper banknotes, I want to believe that their design and content are important for their users. 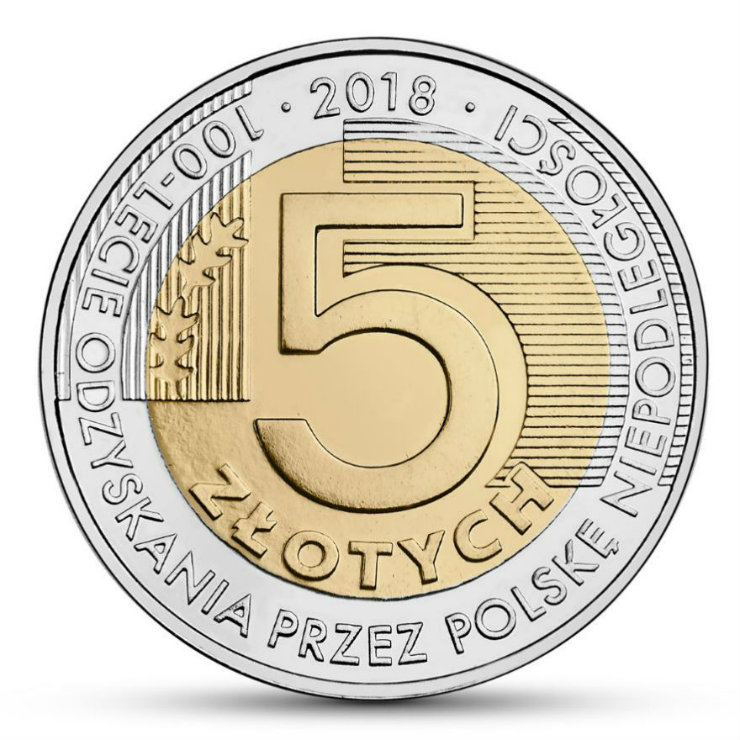