The Poles are leaders in emigration; someone has to replace them here

26.02.2015
Poland is one of the leading OECD countries, but not in spending on research and development or pre capita income – instead, Poland is a leader in supplying foreign countries with emigrants with higher vocational and university education. The consequences are severe. Therefore, it is not surprising that arguments about the need to open ourselves to immigrants from the East are increasingly common.

Although leaving Poland to work abroad benefits individual migrants, the costs to Poland are high. Emigration drains the country of educated and innovative people who will lend their talents to the development of another country, not their native land.

The US is a good example of the positive benefits of accepting migrants. Duke University researcher Vivek Wadhwa estimates  that one in four engineering-technological companies launched in the United States between 1995 and 2005 was founded by immigrants, even though they made up only one-eighth of the US population. Although populists and demagogues are able to name a thousand problems caused by foreigners, overall the influx of immigrants has a positive impact on the host country.

The movement of Poles to find work outside their home country is part of a much wider global trend. According to data collected by the UN Population Division of the Department of Economic and Social Affairs (UN-DESA) and the OECD in the publication entitled “World Migration in Figures”, 231.5m people across the world are now living outside their country of birth, which corresponds to almost 3.2% of the global population. Of those 135.6m are lucky to live in richer countries, with 72m in Europe (in large part an effect of the open border Schengen zone) and an additional 53m in the United States and Canada.

In the 1990s, the number of immigrants in the world was growing at an average rate of 2m per year. During the first decade of the 21st century that movement rapidly accelerated, reaching 4.6m per year. However, the recent economic crisis has caused this figure to decrease to 3.6m per year after 2010. 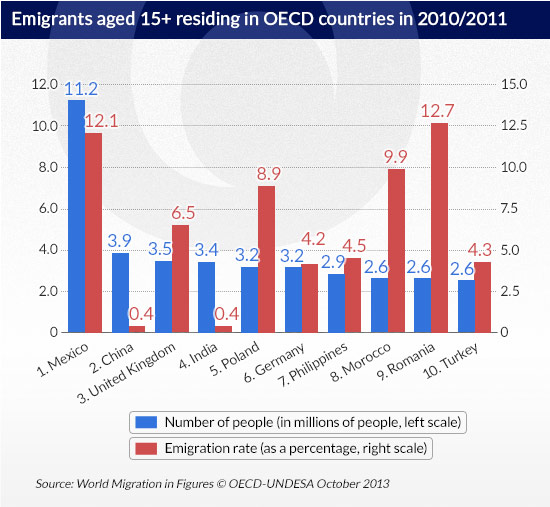 The first place on the list of countries hosting migrants from other countries is taken by the United States, with 20% of total migrants worldwide (45.8m). The  Russian Federation ranks second (11m), followed by  Germany in third place (9.8m), Saudi Arabia is in fourth (9.1m), followed by the United Arab Emirates and the United Kingdom (7.8m each), France (7.5m), Canada (7.3m) and Australia and Spain (6.5m each).

Poland is among the world’s top suppliers of migrants to other OECD countries, with 3.2m Poles living outside the country

According to UN/OECD data, Poland is among the world’s top suppliers of migrants to other OECD countries, with 3.2m Poles living outside the country. That is below the level of Mexico, which has 11m migrants, but is still high. The Polish statistical agency’s count is a little different because international organisations count all native born Poles living abroad, while the Polish statistical agency only counts more recent migrants, coming up with 2.1m departed Poles.

Although the numbers vary, what is important, is that Poland is not able to provide employment and good perspectives to a substantial proportion of its population. Countries with large migration flows like Poland are „giving away” their educated citizens to the most developed nations, thus losing very valuable assets and slowing down their own economic development.

In most OECD countries as well as in major countries outside of that organisation (Brazil, China, India, Russia),  only a few percent of people with university educations live outside their home countries. However, Poland is an exception; 15.5% of educated Poles have left. In Europe, the number of educated emigrants is higher only in  Albania (26.7%), Romania (18.4%) and Ireland (17.4%). By contrast, the overall Polish emigration rate is 8.9%, meaning that people with higher education are more prone to leave than less skilled workers. 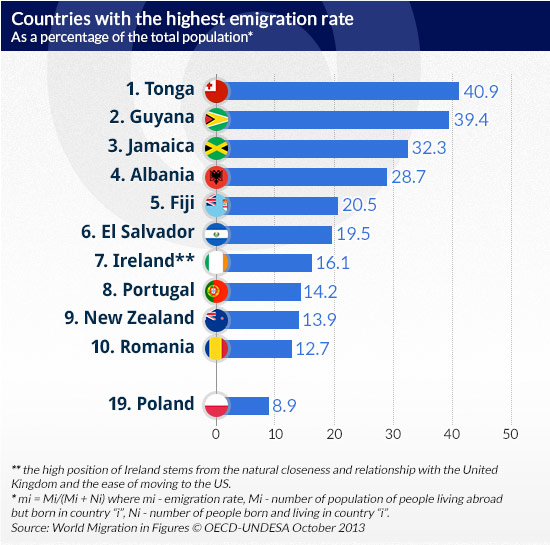 Poland also does worse than other large European countries when looking at the raw numbers of well-educated migrants. Recently, 147,000 educated Poles left their country, while Germany, a country with more than twice Poland’s population, saw 169,000 people with tertiary education emigrate to other OECD countries.

For now,  the debate in Poland is largely about how to produce more Poles, both through natural means and by attracting immigrants, probably people from neighbouring Ukraine and Belarus. But we can count on the fingers of one hand public figures who are trying to question this dogma. That raises the provocative question: In whose interest is it to expensively educate and train hundreds of thousands of Poles who will end up becoming future emigrants?

This is becoming an increasingly pressing issue, as it will  soon be officially confirmed that as a result of migration the Polish population has decreased by at least half a million people to 38m. The real numbers are even grimmer. When the 2011 census counted people who actually live in Poland, not just those who are legally registered in the country but may in fact live elsewhere, Poland’s population came to 37.2m.