20.10.2020
Across the world there has been a significant increase in demand for liquefied natural gas (LNG). The infrastructure for LNG exports and imports is being expanded. The new possibilities for gas imports are particularly important in Europe, where Russia clearly dominates as the major gas supplier.

In early July 2020, Poland’s LNG Terminal in Świnoujście received its 100th delivery. The Q-Flex class gas carrier “Al Safliya”, belonging to the group of the largest LNG tankers, arrived from the Qatari port of Ras Laffan with a cargo load of 120 million cubic metres of natural gas. The increase in LNG purchases is contributing to the gradual change in the structure of Poland’s natural gas imports. According to the information published by PGNiG (Poland’s oil&gas state-owned company), in 2019 LNG accounted for 23 per cent of Polish gas imports. The remaining supplies were delivered through the pipelines, and primarily came from Russia.

Over the last four years, there has been a spectacular increase in the global LNG trade, while gas transmissions via pipelines are starting to decrease. On the one hand, the acceleration in LNG trade is the result of a global increase in gas production, and on the other hand, it is a consequence of the shift from coal towards gas energy. Both of these factors contribute to the growing importance of natural gas in the global energy mix. According to the 2020 edition of BP’s report “Statistical Review of World Energy”, in 2019 natural gas accounted for 24.2 per cent of the world’s energy production. In recent years we’ve seen an increase in the importance of natural gas, as well as the renewable energy. In the last decade, the US contributed the most to the increase in global gas production. Thanks to the increase in the production of gas from so-called unconventional sources, in 2009 the United States became the largest producer of natural gas in the entire world.

BP writes that in the years 2016-2019 the supplies of LNG increased by more than 40 per cent, reaching the level of 485 billion cubic metres (bcm). This is a direct result of the construction of numerous LNG liquefaction and regasification terminals. Currently, 21 countries export LNG and 43 countries have the needed infrastructure to receive it. In 2019, the global LNG trade increased by nearly 55 bcm, primarily as a result of an increase in exports from the US, Russia, and Australia.

New facilities launched last year in the US expanded the country’s gas liquefaction capabilities. As a result, its exports rose by 70 per cent y/y. With a total export volume of 48 bcm, the US became the third largest supplier of LNG in the world, behind Qatar and Australia. Exports from Russia increased by over 50 per cent, thanks to the development of the Yamal terminal. In Australia, exports of LNG increased by over 10 per cent, which was due to higher production in the existing facilities and the launch of the “Prelude” floating LNG terminal. As a result, Australia became the second country in the world whose exports of LNG exceed the level of 100 bcm.

The main recipient of LNG is Asia, which accounts for 70 per cent of global imports. However, in 2019 the increase in supplies to the Asian economies was smaller than in the three preceding years. While in the years 2016-2018 Asian demand was responsible for 90 per cent of the global growth in LNG imports, in 2019 it only accounted for 15 per cent. The main reason was the drop in imports in Japan and South Korea after their nuclear power plants returned to normal operation. Meanwhile, the increase in LNG imports in China only reached half of the growth rate recorded in 2018, which was due to a slowdown in economic growth and a lower number of coal-to-gas transition projects.

In 2019, the largest increase in imports occurred in Europe, which is heavily dependent on Russian gas (nearly 40 per cent of gas imports into the European Union come from Russia). Europe’s interest in LNG increased after the Russian-Ukrainian crisis. The development of infrastructure for receiving LNG is currently one of the priorities of the European Union’s energy policy. The EU member states that have access to LNG terminals are less vulnerable to possible supply interruptions than countries dependent on a single supplier. In 2019, LNG imports to Europe increased by 50 bcm y/y. According to Eurostat’s data, in 2019, 12 EU member states were importing LNG. The biggest recipients were France and Spain. Spain mainly imported LNG from Qatar, Nigeria, and the US, while France’s imports mostly came from Nigeria and Algeria. There are currently 24 LNG terminals in the EU.

The fast growth of global LNG supplies will probably be interrupted in 2020. The mild winter and the restrictions introduced due to the pandemic have led to a reduction in global demand for natural gas, as well as a build-up of inventory levels in Europe and Asia. The US Department of Energy informed that more than 70 LNG deliveries from the US were cancelled in June and July. More than 40 transports will be cancelled in August.

Diversification of gas supplies in Poland

In Poland, the key motivation for constructing the LNG terminal in Świnoujście was energy security and the associated need for the diversification of supplies. These objectives have been implemented since 2016, when the first commercial delivery was received (it was preceded by two LNG deliveries used for the technical launch of the terminal). The terminal’s current regasification capacity is 5 bcm per year. The terminal in Świnoujście also includes two cryogenic tanks for LNG storage with a capacity of 160,000 cubic metres each. The expansion works launched in mid-2020 will increase the terminal’s regasification capacity to 7.5 bcm. A third tank with a capacity of 180 thousand cubic metres will also be built.

In 2019, Poland imported 3.43 bcm of LNG (volume following regasification). A total of 31 cargo loads were delivered to Świnoujście. The biggest supplier is Qatar. In 2019, it sent 18 of the largest gas tankers to Poland, with a total cargo load of 2.3 bcm. The number and size of cargo ships have not changed compared to 2018, which means that the supplies from Qatar have reached their target level. Most of the supplies are implemented under the long-term agreement between PGNiG and Qatargas Operating Company Ltd., which will remain in force until 2034.

In 2019, the deliveries from the US also increased. Poland received 10 deliveries of LNG for a total of 945 million cubic metres, or 28 per cent of Poland’s overall imports. Given the order portfolio of PGNiG, the importance of the US in LNG supplies is expected to increase in the coming years. Two contracts with American suppliers are currently being implemented. One is a medium-term contract with Centrica, which assumes 9 deliveries in the years 2018-2022. The other is a long-term contract with Cheniere Energy. Based on this agreement, the volume of supplies will significantly increase starting from 2022. Both agreements were concluded in the DES formula (Delivery Ex Ship), which means that the exporter delivers the cargo to the location specified by the recipient. Due to the increase in LNG supplies, some of the gas imported from the US is subsequently re-exported to Ukraine. In addition to supplies resulting from medium-term and long-term contracts, so-called spot purchases (i.e. short-term contracts) are also implemented. In 2019, Poland received 10 such deliveries originating from the US, Qatar, and Norway (4 in 2018).

This year, the imports of LNG to Poland are increasing. In the H1’20, there were 21 deliveries which is five more than in the H1’19. The group of countries supplying LNG to Poland now also includes Trinidad and Tobago.

After the expansion of the terminal in Świnoujście, PGNiG will start importing LNG from two additional American companies: Global Venture (deliveries from the Calcasieu Pass terminal will begin in 2022, and deliveries from the Plaquemines terminal will commence in 2023), and Port Arthur (the first deliveries are scheduled for 2023). These agreements were concluded in the FOB formula (Free On Board), which means that PGNiG will be receiving the cargo loads in the US. This means that the company will have to lease gas tankers. At the same time, however, PGNiG will be able to deliver the cargo to a destination other than Świnoujście.

Based on the volumes of LNG that are supposed to be delivered pursuant to long-term contracts and current levels of spot deliveries, it seems that starting from 2024 PGNiG’s combined purchases will reach over 12 bcm, which is just a little less than the total volume of natural gas imports to Poland in 2019 of 14.85 bcm. The currently planned floating regasification terminal in the Bay of Puck is supposed to further increase Poland’s LNG imports capacity. Moreover, the launch of the Baltic Pipe, which will be transmitting gas from the Norwegian continental shelf (including gas fields operated by a Polish company), is planned for 2022. Thanks to the development of such an extensive potential of gas imports, Poland will be able to permanently break its dependence on supplies from Russia, while simultaneously increasing the importance of this raw material in the overall energy production.

Category: Business 27.08.2020
In May, the Ukrainian government preliminarily approved the text of a memorandum on the prospects for importing liquefied natural gas (LNG) from the US. The agreement envisages supplies of 5.5 billion cubic meters (bcm) of natural gas annually, for a period of 20 years. 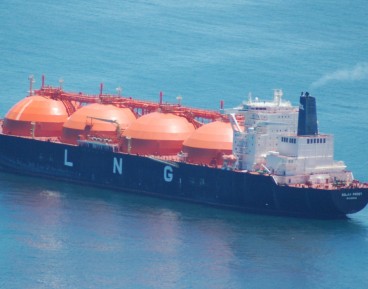