The digitalization of banks is too slow

Most of banks are looking for their place in the digital world and are lacking a digital strategy, shows the study "How ready are European banks for a digital world", conducted by the International Data Corporation and SAP.

Banks are under pressure from two directions. On the one hand, the expectations of the increasingly digitally savvy consumers are growing, and on the other hand they are increasingly feeling the competition of the tech companies ‒ the fintechs. The study „How ready are European banks for a digital world” conducted by the International Data Corporation and SAP attempts to answer the question of how banks are coping in an increasingly digitized world.

The company has surveyed 253 retail and corporate banks in the region of Europe and the Middle East and Africa (EMEA), so the results can be considered representative in terms of the digital transformation in the financial sector.

The main conclusion of the study is not optimistic for the banks – banks promise and announce a lot, but have little to show in terms of action and innovative solutions.

As a result of the study, the banks were divided into the following segments according to the criterion of progress of the digital transformation:

Unfortunately, most banks are institutions still looking for their place in the digital world, at the most working through individual projects, and lacking an integrated approach or a digital strategy.

Only 7 per cent of the banks were recognized as true digital powerhouses capable of changing the rules of the game on the market, and treating the challenges on the market as a chance for development.

The Polish mBank was included in this category. Just one in four banks in the EMEA region can boast an integrated approach and a digital strategy (digital players).

According to the report, the biggest challenge for the banks is the synergy of business and IT activities already at the point of creating a digital strategy and implementing projects resulting from it. Meanwhile, the IT function still fulfils a more service-oriented role (at least in 50 per cent of the surveyed banks), and not a role which is creative or co-creative in relation to business, and this is what gives the highest probability of success in a world in which technological players are growing in strength.

The failure of banks to meet the needs of digital customers is confirmed by the study of the consulting firm Avoka, conducted on three markets which are seemingly developed in terms of digitization – the United States, the United Kingdom and Australia.

The most digitally advanced area is bank advertising. Only 17 per cent of the banks were evaluated as meeting the digital expectations of retail customers in the mobile channel, while the situation in relation to business customers was even worse – only 4 per cent met the needs of their clients. The best results in this respect were with regard to the possibility of mobile asset management in the UK, where 34 per cent of the surveyed banks provide such an opportunity, and the possibility of opening and using an account within the full scope of services in Australia ‒ where 37 per cent of banks offer such activities. The multi-channel nature of the offer and the contact with the bank still leave a lot to be desired – 44 per cent of entities provide such possibilities on-line, but less than half in the mobile channel.

It seems that Mark Mullen, the president of the mobile Atom Bank, which was founded on the basis of a technological start-up, was right when he claimed that the banks are trying to introduce new products based on the old infrastructure, and that is „like putting lipstick on a pig – ultimately it’s still a pig and the new front end is still running into an awful digital back end”.

The MIT report entitled „Digital Banking Manifesto. The End of Banks?” also points out this problem and its causes. New generation IT solutions are 60-80 per cent cheaper to implement, and their maintenance costs are up to 50 per cent less in comparison with the existing banking systems. What’s more, the personal costs of handling them are less than 15 per cent of the respective costs in traditional banks. The report also defines the three pillars of the digital bank of the future, which should take into account the needs of the three groups of stakeholders: customers, investors, and of course the bank itself. With respect to customers, the objective is to provide them with additional value in the form of:

In this regard, the banks could look for solutions similar to those that are introduced in the insurance industry ‒ telematics, data from so-called wearables provides an additional area of contact with the client, creating the possibility of optimizing their behavior on the road or pro-health behavior and thus impacting the costs.

One opportunity in support of the digital transformation of the banking sector are the fintechs. However, a relatively large part of the European banks, reaching as much as 30 per cent, treats the technology companies as competition (excluding the United Kingdom which is the largest financial and technological hub). The further away from the center of the European banking industry, the more open the attitudes towards collaboration. 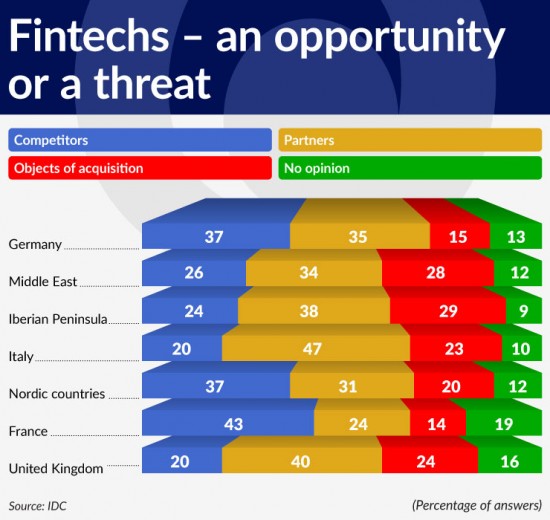 The acquisitions of technology companies declared by some representatives of the banking sector do not necessarily have to be good for the banks, especially if they do not have an integrated digital strategy.

The authors of the study on the state of the digital transformation of banks in Europe conclude that digitization is not simply one of the possibilities, but an absolute necessity in the face of a dynamic market and technological changes. 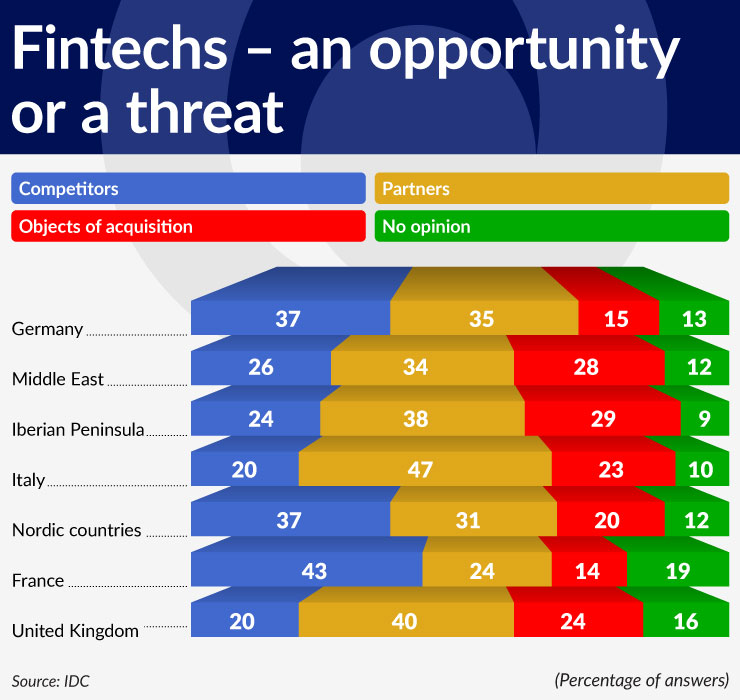