We are entering a new era of mass migration

The experts from the Economist Intelligence Unit are pointing out that the population of Central and Southeast Europe will decrease by nearly 34 million people over the next 33 years.

No other part of Europe or the world is facing a similar loss of inhabitants. Poland is among the countries most threatened with depopulation. According to the latest forecasts of the United Nations, in 2017-2050 the world population will increase by 29.4 per cent, from 7.5 to 9.8 billion people. This will be the case if the medium variant comes true, since in the maximum growth scenario the global population will significantly exceed 10 billion. However, these population increases will apply primarily to African and Asian countries. The most populous country in the world will be India not China.

Population growth is not and will not be uniform. As many as 51 countries will experience a population decline. The Economist Intelligence Unit (EIU) experts indicate that according to projections countries of Central and southeast Europe (CSE) (according to the UN methodology) have the worst demographic prospects. In the 10 CSE countries the population will decline by 11.6 per cent on average. Bulgaria will be the most affected by this demographic loss – according to the projections by 2050 that country will lose 1.6 million citizens (a decrease of 23.4 per cent).

UN forecasts predict that by 2050 the population of Poland will decrease by almost 5.8 million people, which corresponds to a 15.1 per cent decline. From an economic point of view, such a large loss could be partly supplemented with an increased inflow of migrants from the Eastern Europe, e.g. from Ukraine. During this time period the population of the latter country will decrease by nearly 7.8 million people, but emigration will not be the only reason.

The rapid aging of population is a common feature of almost all societies in our part of Europe. The Czech people will be affected the least and their population will only decrease by 5.3 per cent. The forecasts for Russia, which had been affected by a demographic depression before, look relatively good. In that country the population is expected to decline by 7.8 per cent.

Population falls in one place and grows in another

However, the situation in individual countries will be heavily varied. According to the forecasts of UN experts, the number of inhabitants of Germany will decrease by 3.5 per cent. The situation will be different in the case of France, where the population will grow by 8.7 per cent over the next three decades. The forecasts are better for Belgium (an expected increase of 9.3 per cent), and the population growth predicted for Switzerland is even higher (an increase of 16.6 per cent). In terms of demographic projections, Luxembourg is supposed to achieve the highest population growth (an increase of 36.4 per cent). 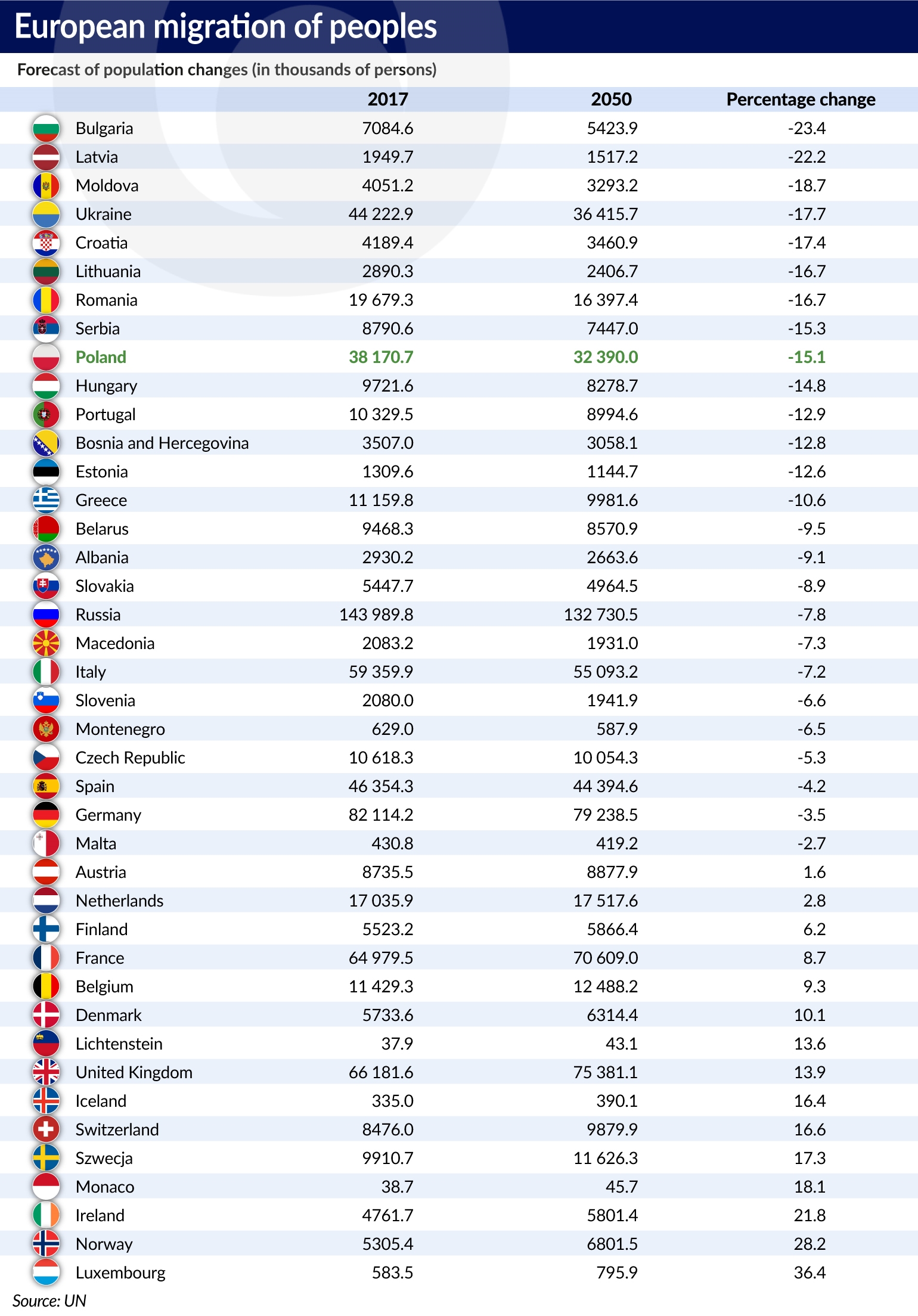 There are just too few of us

As pointed out by the experts from the EIU, the changes in the size of population will be reflected in the changing ratios of working-age people and retired people. From the economic point of view, this will determine the growth potential of individual countries. All the CSE countries are expected to experience a decline in the number of working-age people by 2050.

The main cause of this process, as indicated by the EIU, is the decline in the fertility rate, which has been mainly associated with the increase in economic uncertainty following the collapse of communism and the lack of adequate social welfare systems. Poland was affected by the decline in the fertility rate the most severely (it fell to just 1.32 per cent in 2015). Another European society affected on a similar scale was Portugal, where the changes also were due to economic uncertainty.

Another significant factor in population decline is the emigration of workers from CSE to the western part of the continent. Over the last 25 years, the countries of Central and Southeast Europe (the EIU applies different geographical divisions than the UN) lost 20 million people, which corresponds to about 5 per cent of the population. Only a small number of emigrants returned to their homelands.

According to the EIU, this process of mass migration will continue. The countries most affected by emigration include Bulgaria and Romania, as well as the Baltic countries. This will have consequences such as further decline in the number of working-age people. In Poland, the scale of this decline is estimated to reach 1.1 per cent annually in the years 2016-2050. Bulgaria and Latvia are the only countries where the decline in the working-age population will be worse than in Poland.

We are getting too old

One measure used in the assessment of the demographic prospects of countries is the indicator of the number of people in the retirement age in relation to the number of working-age people (the old-age dependency ratio). In its comparisons the EIU uses data from 2015, but more recent data on this subject have been compiled by the Eurostat. According to the latter datasets, in Poland this ratio amounted to 24.2 per cent in 2017.

This is currently not a bad result compared to other European countries. The situation in Italy (34.8 per cent), Greece (33.6 per cent) and Finland (33.2 per cent) is definitely worse in this respect. Among the countries that are geographically closer to Poland, this ratio is also high in Germany (32.4 per cent). A higher old-age dependency ratio than in Poland was also recorded in the neighboring countries – the Czech Republic, Slovakia, Lithuania, Hungary, Romania and Bulgaria.

The forecasts for the future are significantly worse, however. This is, among other things, the result of the increasing life expectancy. The forecasts are based on UN estimates which indicate that the number of people in retirement age in relation to the number of working-age people will significantly increase all across Europe (from 26.4 per cent in 2015 up to 48.7 per cent in 2050). The situation in this respect is projected to be the worst in the countries of southern Europe, where this ratio will increase to 64.6 per cent (which means that for every 3 people of working age there will be 2 people of retirement age). A record high old-age dependency ratio (71.2 per cent) will be recorded in Spain.