21.01.2020
By the end of December 2019, Serbian President Aleksandar Vučić and Prime Minister Ana Brnabić presented the Serbia 2025 program, which contains a plan of investment projects for the development of the country over the next five years. 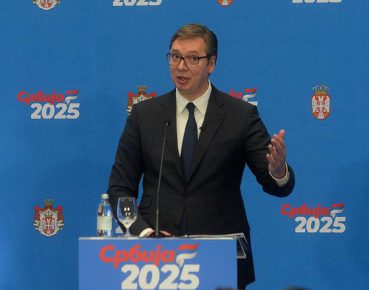 „Today, Serbia is a fundamentally different country, stable and highly respected abroad, with an underestimation growth rate below ten per cent, one of the highest growth rates in Europe,” Ms. Brnabić said. She stressed that Serbia has unemployment rate below 10 per cent (9.5 per cent), which is constantly declining, while the average net salary is slightly above EUR500, as the salaries and pensions are increasing.

The Serbia 2025 program is worth just under EUR14bn, Ms. Brnabić stressed, adding that the program would be financed by the state budget, but also by loans from international financial institutions. She stressed that none of the investment projects will threaten the macroeconomic stability of the country. „We plan to continue reducing public debt, and the government will create a body to oversee each project, or the overall Serbia 2025 plan, and one should know at each point where each dinar goes and how it is spent, as well as how each project is progressing,” Ms. Brnabić said. „Serbia is on the verge of getting an investment rating today,” the PM added.

The President Aleksandar Vučić added details. „At the end of 2025, the average salary should be EUR900, pensions will be EUR430-440. This is our promise to the citizens of Serbia,” he said. This will be one of the results of the new investment plans, which, as Mr. Vučić stressed, unlike the difficult reforms of 2014, will primarily affect the government, CEOs of public companies, EPS, Srbijagas, and not citizens. „The first goal of the Serbia 2025 plan should be drastically reduced emigration of young people from the country,” Mr. Vučić said.

If Serbia wants to increase twofold wages and pensions, GDP growth has to be more than 4-4.5 per cent. 7 per cent is an optimistic forecast and means even faster and stronger transformation. The preconditions for the anticipated growth and investment plan are to continue investment reforms, to strengthen regional cooperation, to continue education reform and deepen the financial market. More than 500 public companies in Serbia need to increase their productivity and profitability, and the labor market, in particular, through the National Employment Agency, needs to be strengthened to prevent the workforce from leaving.

Serbian President said that preliminary estimates for Serbia’s investment in 2019 amounted EUR3.8bn, which, he says, is higher than in all Western Balkan countries together. „The level of FDI is up to 9 per cent in 2019 compared to 2018. Serbia will had the highest growth in Europe of 6 per cent in November 2019, and ended the year with a growth of 4 per cent, although it was forecast to be 3.5 per cent,” said Mr. Vučić. He estimated that since 2014, Serbia „has succeeded as the country that is making the fastest progress in the Southeast Europe. We have managed to be among the best in Europe, not only in basketball, water polo and volleyball but also in the economy. Today is the time to come up with different measures for our citizens.”

He announced that more than EUR5bn will be spend on infrastructure within the Serbia 2025 program. Mr. Vučić explained, among other things, that a highway Sombor-Kula-Vrbas-Bečej-Novo Miloševo-Kikinda would be built. In this way, he says, the northwest part of the country will be connected with the northeast. The second route will be the Belgrade-Zrenjanin highway, as well as Novi Sad-Zrenjanin.

A little over EUR3.5bn should be directed in the railway infrastructure, and the construction of the Belgrade subway is estimated at EUR1.3bn. Mr. Vučić has already earmarked EUR800m for the reconstruction of the Novi Sad-Subotica railway line, and EUR200m for the Belgrade-Niš railway line. Serbian president said that EUR274m will be provided for investments in water transport, most of which will be invested in the expansion of the Prahovo port, Bogojevo in Sremska Mitrovica, then for the construction of a new port in Belgrade, additional investments in the Port of Novi Sad, in the port of Smederevo and other. In the case of aviation, the budget will provide means to continue development. Mr. Vučić noted that the state cannot allocate much because of the EU’s restrictive state aid policy. „The development of airports and air transport is a major step ahead,” he added.

Concerning the agricultural sector, a total of EUR300m will be invested in infrastructure beyond the budget, and the money will go mostly to irrigation — EUR86m, while EUR70m will be for land consolidation, EUR50m for tractors for farmers, and EUR200m will be reserved for investments in tourism infrastructure, such as spas, sports centers, mountain ski centers, and archaeological sites.

Additional EUR700m will be allocated to help young people. The President said that, in addition to all regular budgetary payments, EUR500m is intended to help young, married couples. „We want young, married couples to have an easier time getting a roof over their heads and separating faster from their parents, and to start working earlier, and having children sooner,” Mr. Vučić said. He noted that the average age in Serbia is 46 years and that the country is losing a whole generation compared to Turkey. The President also said that EUR200m would be directed for increased financial backlogs for new-born children, increased subsidies for kindergartens, biomedically assisted fertilization, counselling on the reproductive health of young people, protection for and prevention of children with autism and help and more.

The Serbia 2025 Program identifies all the vulnerabilities of the Serbian economy and the benefits that can be capitalized. It is based on a vision of Serbia’s development that pursue faster growth rates to accelerate its accession to the European Union.

Serbia has to cut relatively high taxes in private economy and transform the country with FDI in priority sectors in which it has a competitive advantage. The EUR14bn over the next five years may not be sufficient if invested inappropriately. Some funds will be needed to meet the demands of the circular economy and to address the climate crisis. Serbia also needs to follow global development trends, especially those related to Industry 4.0, as well as innovations in life science technologies and must opt for structural policies that support macroeconomic policies, while monitoring industry trends. It is known that in developed economies industry and agriculture create 20 per cent of GDP, and Serbia is still late due to problems from the 1990s, thus it is difficult to secure investments in sectors that have positive long-term effects.